You are here: Home / parenting / Surviving The Strong-Willed Child

Are you currently surviving a strong-willed child? I used to laugh when my mother-in-law, Darlyne, told me how my husband was a strong-willed child. That was until our daughter turned out to be exactly like her dad. Maybe some of the tools I used will help you in your parenting journey. I used to laugh when my mother-in-law, Darlyne, told me how my husband was a strong-willed child. That was until our daughter turned out to be exactly like her dad.

Darlyne used to tell stories about when John was a baby. She said he’d crawl to the nearest electrical outlet and want to stick his finger in it. Telling him no, she’d gently slap his hand, and pull him away. And yet, he’d return. She’d do that over and over, trying to hinder him. She’d turn his attention to something else, trying to distract him. Finally, she’d give up, and she’d have to cover the outlet.

“But I learned as he grew that his strong will benefited him in the long run,” Darlyne told me. I believed her.

I learned as he grew that his strong will benefited him in the long run. @TriciaGoyer

A scrawny high schooler, John was told he’d never make it in the Marines. So he joined. He not only made it, but he graduated top of his class. In the military, he stayed true to God, even when alcohol and women were readily available to him. All through life, he has lived as a man of honor and excels in his work. His strong will has taken him far.

Hope for Surviving The Strong-Willed Child

This, of course, wasn’t comforting as I dealt with my own strong-willed child. Leslie was a sweet baby doll her first year of life, but things changed once she turned 2. She’d have tantrums if she didn’t get her way. She would hide behind me and refuse to talk when people approached her. If I gave her a blue cup, she wanted the red one. If I offered a cookie, she’d want a cracker and vice versa. Each day was a battle—my will against hers. There were days I loved my child but didn’t like her that much.

The parenting class Growing Kids God’s Way helped a lot. I can’t remember everything that was taught, but here are some things that I stuck to along the way.

I narrowed my daughter’s choices.

Instead of offering a blue cup and her demanding a green one, I’d offer both colors and let her pick from those two. Of course, she’d then want the red cup, but I didn’t give in. She had to pick between the two. This worked for clothes, snacks, and other things. I’d still give my daughter a choice, but I’d limit those choices. After a while, the battles stopped. She soon understood that I wouldn’t give in to her whines.

I prepared her for interaction.

If we were going to church, I’d explain possible things that could happen, such as people introducing themselves or commenting on her pretty dress. I’d role-play the correct response with her. And then I’d reward her when she responded correctly. I soon discovered that with some instruction, my daughter not only responded correctly, but she soon came out of her shell and became a chatterbox.

I stood by my word.

Even if my daughter disagreed or challenged me, I didn’t give in. I learned that giving in was showing her that a bad attitude would get her what she wanted—and that’s not what I wanted to reward. Once that no longer worked, she discovered that behaving well got her the best results.

I focused her strong will on positive things.

Academics, piano, and friendships – I gave her the tools to excel in things she was good at, using her will as a benefit. And when the going got tough, she dug in.

I focused on filling her love tank.

My daughter is a quality time and gifts person. She gets excited when I bring her a pack of gum or her favorite lip gloss from the store. She loves when I take her to coffee or when we go to lunch. As we spent time face-to-face, my daughter opened up about everything she was dealing with. She even confessed to some areas that she struggled with. I discovered that she wasn’t as strong as she liked everyone to believe. When I filled her love tank, her will weakened, and we built a bond that has remained for years.

Those are a few simple things that helped me.

As the months passed, my daughter’s attitude changed and I enjoyed her more and more. I also discovered her strong will did help her excel. At 22, she lives with two roommates in the Czech Republic, and she shares her faith with teens in a place where 90% of people are unchurched. When her peers are still in college, she already has her degree and moved on to mission work. Her will pushed her through four years of college by the time before she was twenty-one. Her will has helped her adjust to a new country and find ways to push through spiritual barriers in this former Communist land.

Looking back, I’m appreciative that God made her who she is for a reason. With a will like that, she’ll be able to do many things for God’s glory! I can’t wait to see what else God has in store!

God, THANK YOU for my strong-willed child! They have a valiant sense of strength. I’m honored to have the opportunity to instill valuable character traits in them. Guide my patience, my parenting tools, and my own sense of strength. 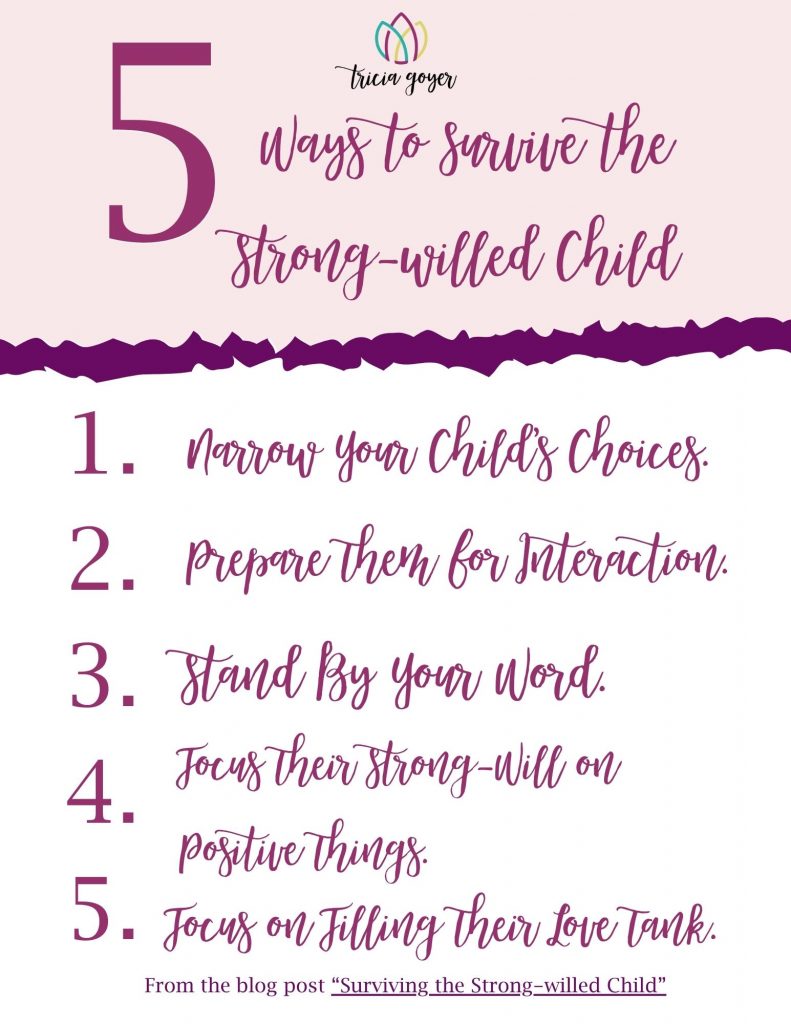 The Goyer home—made up of two parents, eight kids, and one grandmother with dementia—is never without noise, mess, and, often, complaining. And it’s not just the kids grumbling. Adopting seven children in less than six years has been an adjustment, but it’s time to move out of survival-mode and into growth-mode. So the family decides to tackle the impossible: a grumble-free year. What could possibly go awry?

The Grumble-Free Year follows the Goyers as they go complaint-free and discover what it looks like to develop hearts of gratitude. They share their plans, successes, failures, and all the lessons learned along the way, offering not only a front-row seat to the action but also real-life steps for uncovering hearts that are truly thankful.

Read the first chapter of The Grumble Free Year HERE!