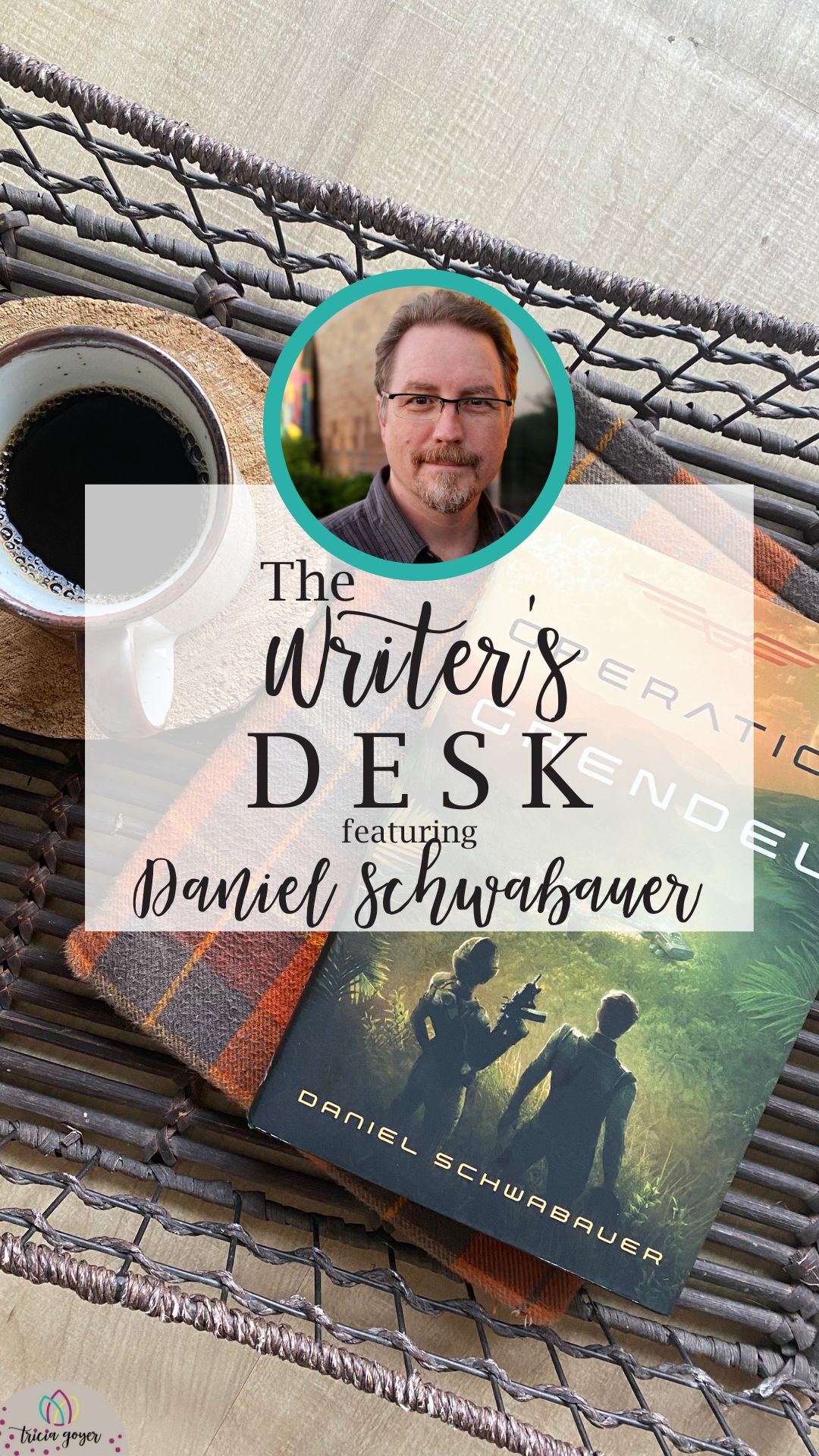 The Writer’s Desk with Daniel Schwabauer

Daniel Schwabauer is the creator of several widely-praised writing programs from Clear Water Press. His professional work includes stage plays, radio scripts, short stories, newspaper columns, comic books, and scripting for PBS. Daniel’s young adult novels from AMG Publishers, Runt the Brave, Runt the Hunted, and The Curse of the Seer, have received numerous awards. His adult novels, Operation Grendel and Maxine Justice: Galactic Attorney, are available from Enclave Publishing. Daniel has a MA in creative writing from The University of Kansas and is currently working on a doctorate in Semiotic Theology. He and his family make their home in Olathe, Kansas.

It’s the war story he’s dreamed of. But the battle may cost him his mind.

But when his commanding officer, Captain Ansell Sterling, is fatally wounded before the negotiations can begin, Dahl can no longer just report on the mission. He’s ordered to complete it. With help from the AI embedded in Sterling’s comms bracelet, Dahl must impersonate his commander—a Marine Corps hero and psychological operations expert.

However, Sterling’s AI may be luring him to surrender more than he realizes. And the mission Corporal Dahl thinks he’s running isn’t the only operation underway.

Purchase a copy of Operation Grendel 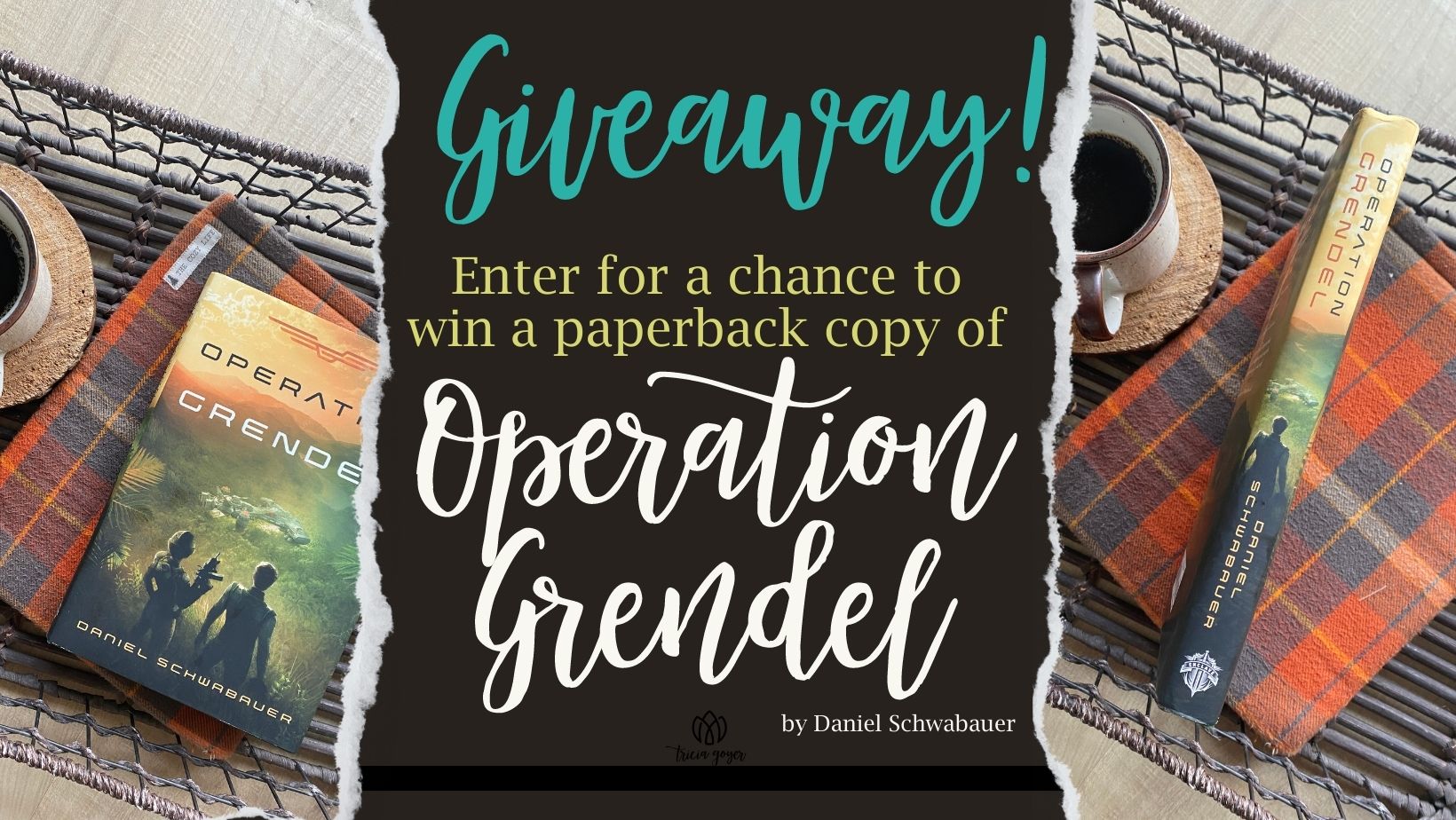 DS: I like to believe that a childhood lost in daydreams was the perfect career prep for what I do now, which is to tell myself stories and then write them down. It’s more involved than that of course, but the essentials are a love of reading and enough self-discipline to write regularly (especially before a deadline).

DS: One good idea never turns into a good story for me. I always need at least two, plus an interesting doorway into the story itself. Sometimes my door into the story is a character, other times it’s an intriguing event. Sometimes it’s a question so weird that I just have to write until I discover a reasonable answer.

DS: It takes longer than you think to figure out what sort of writer you are, so write more sooner!

DS: All the books I’ve bought over the years are the most accurate answer. The most emotive answer is probably the money I spent studying science fiction at KU with Professor James Gunn. The simplest answer to replicate would be Scrivener. (Honest, I don’t get a commission; I just love the program and have used it since its launch for everything from textbooks to novels and screenplays and now my dissertation. It’s worth every penny.)

TG: What did you edit out of Operation Grendel?

DS: A lot of stuff gets washed out in revision, but the most interesting change made to the manuscript was an edit into the story, not out of it. After reading the manuscript, Steve Laube at Enclave told me he wanted to publish it but thought the ending needed a more hopeful tone. I told him I wasn’t sure how to write such an ending for this story, but I would sleep on it. In the morning I woke with an idea spinning in my head, just barely within reach. I immediately ran down to my office and pounded out the new chapter in a few hours. That chapter because of the Epilogue. 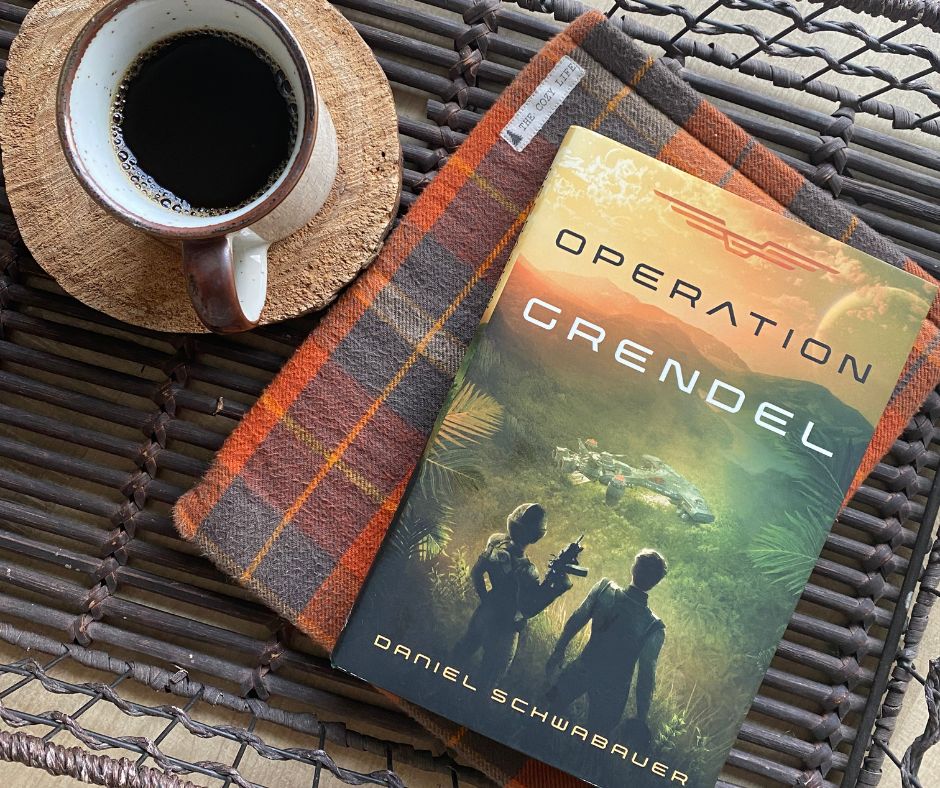 DS: I think that depends on where you are in your writing career. At first, it is usually something like insecurity (“Am I really any good at this?). Later the difficulty is more along the lines of purpose (“Are my novels do anyone any good?”). At some point —and this is where I am now, I think —you end up asking more existential questions, like “Why didn’t I listen to my mom and become a dentist?”

DS: I read The Lord of the Rings in the sixth grade, finishing the third book late a night with a flashlight under the covers. Like Alexander the Great, I wept because there were no more Middle Earths to conquer.

DS: The Crying for a Vision by Walter Wangerin Jr., is a literary masterpiece.

DS: I’m not worthy of having a red panda as my mascot, but maybe someday.

TG: Which book that you’ve written is your favorite?

DS: It’s hard to pick a favorite, but Maxine Justice: Galactic Attorney has a bit of my soul inside it.

TG: Which of your books was the most fun to write?

DS: Maxine Justice: Galactic Attorney. I spent the entire process in a sort of light-hearted dream world where I mostly followed Maxine around and took notes about her shenanigans. Sometimes I offered suggestions for better dialogue, but more often she said and did things I hadn’t expected.

TG: Which was the most difficult — and why?

DS: Operation Grendel was difficult, though not from a technical standpoint. It’s not that the words wouldn’t flow, nor that the characters were reluctant. The story itself seemed to want to be written. But sometimes you can tell you are trying something just at the edge of your capabilities, like a circus performer who is balancing spinning plates on sticks, and because he feels good decides to add just one more. Grendel required more plates than I had ever dreamed of using, and I didn’t want any of them to come crashing down.

TG: Finally, what is coming up next for you?

DS: I’m trying to write another book in the Maxine Justice universe while simultaneously writing my dissertation. These two things are so utterly different that it is like trying to simultaneously rub your stomach and pat the moon.

Enter to win a signed paperback copy of Operation Grendel*

*Due to shipping costs, winner must have a US address. 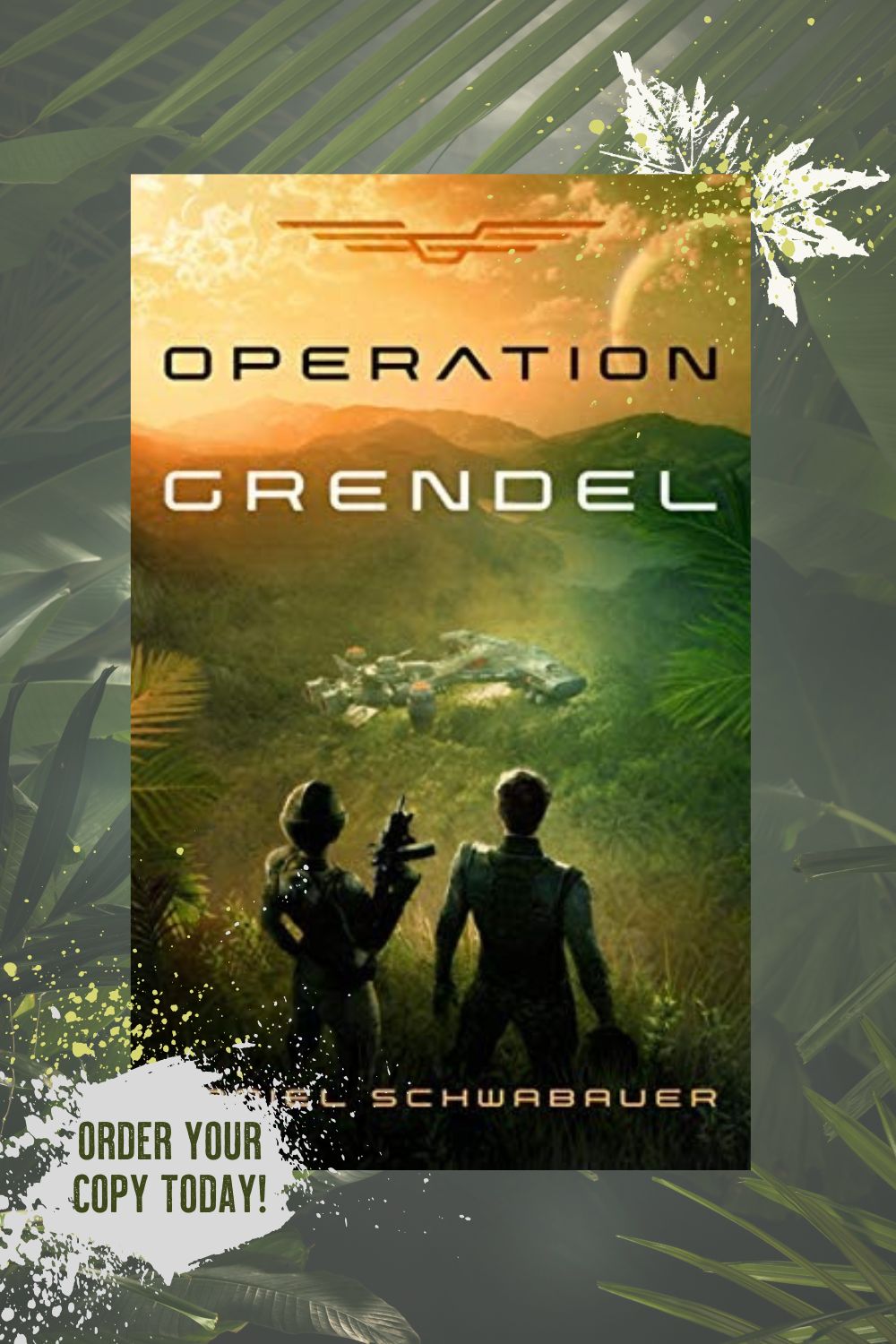 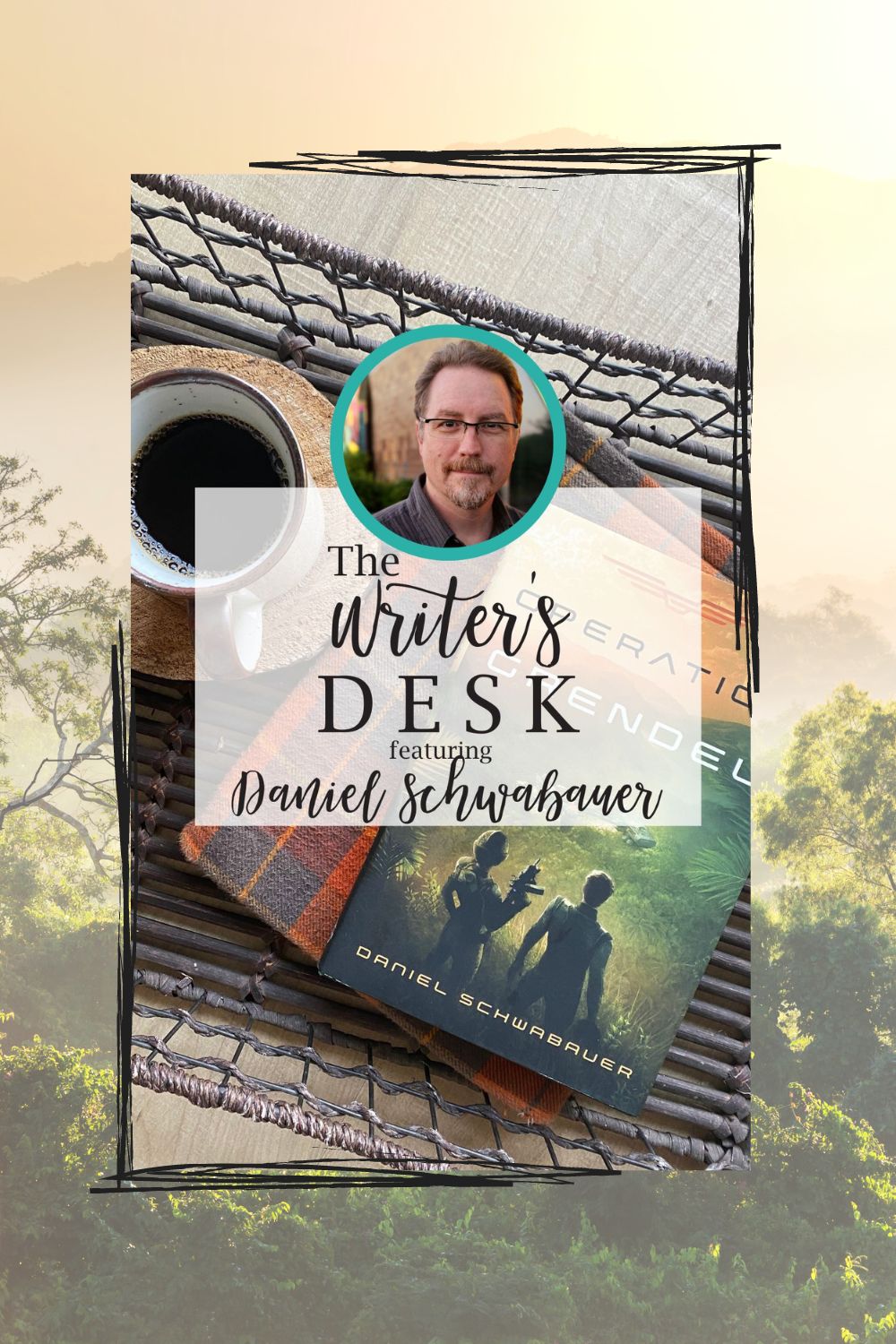 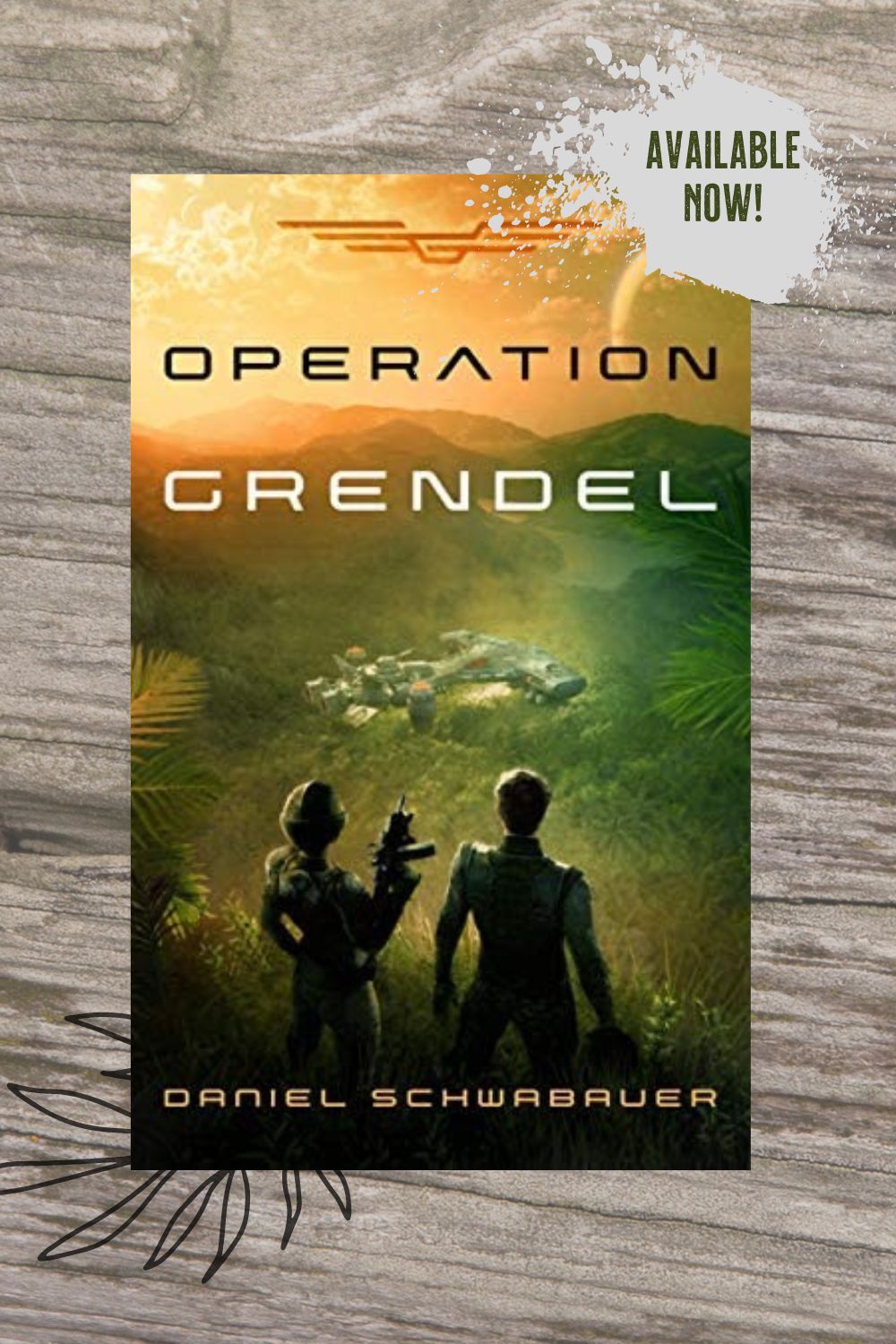