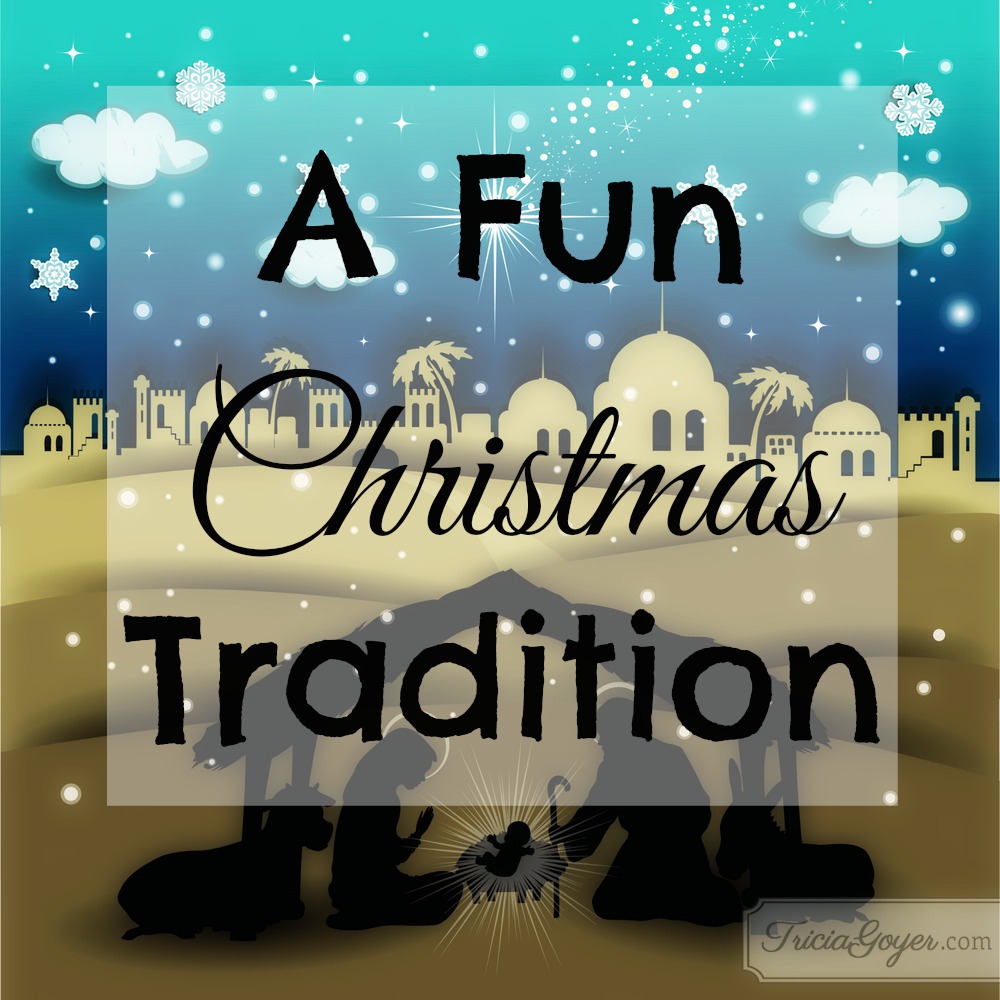 Christmas for the Goyers mean large family gatherings. My husband, John, came up with this fun and interactive idea.

Below is the Scripture passage of the birth of Jesus. Notice some of the words are underlined. Each of the underlined words have a “sound effect” that go with them.

Write out the words and the sound effects on slips of paper and have family members draw them from a jar. Then as the Bible story is read everyone must pay attention and say their sound effect at the right time.

This allows for reader and listeners the ability to participate in the Christmas story. Feel free to change the call out phrase to fit the audience of participants.

Share the #Christmas story and get your #family involved! @TriciaGoyer

It’s a fun way to share the Bible Story and get family members of all ages involved!

The Birth Of Jesus

In the sixth month of Elizabeth’s pregnancy, God sent the angel Gabriel to the Galilean village of Nazareth to a virgin engaged to be married to a man descended from David. His name wasJoseph, and the virgin’s name, Mary. Upon entering, Gabriel greeted her: “Good morning!  You’re beautiful with God’s beauty, Beautiful inside and out! God be with you.”

Mary was thoroughly shaken, wondering what was behind a greeting like that. But Gabriel assured her, “Mary, you have nothing to fear. God has a surprise for you: You will become pregnant and give birth to a son and call his name Jesus. He will be great,  be called ‘Son of the Highest.’ The Lord God will give him the throne of his father David; He will rule Jacob’s house forever—no end, ever, to his kingdom.”

Mary said to Gabriel, “But how? I’ve never slept with a man.”

Gabriel answered, “The Holy Spirit will come upon you, the power of the Highest hover over you; Therefore, the child you bring to birth will be called Holy, Son of God. And did you know that your cousin Elizabeth conceived a son, old as she is? Everyone called her barren, and here she is six months pregnant! Nothing, you see, is impossible with God.”

Then Gabriel left her.

Before they came to the marriage bed, Joseph discovered Mary was pregnant. (It was by the Holy Spirit, but he didn’t know that.) Joseph, displeased but noble, determined to take care of things quietly so Mary would not be disgraced.

While Joseph was trying to figure a way out, he had a dream. Gabriel spoke in the dream: “Joseph, son of David, don’t hesitate to get married. Mary’s pregnancy is Spirit-conceived. God’s Holy Spirit has made her pregnant. She will bring a son to birth, and when she does, you, Joseph, will name him Jesus, because he will save his people from their sins. This would bring the prophet’s embryonic sermon to full term: Watch for this—a virgin will get pregnant and give birth to a son; they will name him Immanuel.

Then Joseph woke up. He did exactly what Gabriel commanded in the dream: He marriedMary. But he did not consummate the marriage until she had the baby. He named the babyJesus.

About that time Caesar Augustus ordered a census to be taken throughout the Empire. This was the first census when Quirinius was governor of Syria. Everyone had to travel to his own ancestral hometown to be accounted for. So Joseph went from the Galilean town of Nazareth up to Bethlehem in Judah, for the census. As a descendant of David, he had to go there. He went with Mary, his fiancée, who was pregnant. While they were there, the time came for her to give birth. She gave birth to a son, her firstborn. She wrapped him in a blanket and laid him in a manger, because there was no room in the inn.

How do you get your #family involved in #Christmas fun? @TriciaGoyer

There were shepherds camping in the neighborhood. They had set night watches over their sheep. Suddenly, Gabriel stood among them and God’s glory blazed around them. The shepherds were terrified. Gabriel said, “Don’t be afraid. I’m here to announce a great and joyful event that is meant for everybody, worldwide: A Savior has just been born in David‘s town, a Savior who is Messiah and Master. This is what you’re to look for: a baby wrapped in a blanket and lying in a manger.”

At once Gabriel was joined by a huge angelic choir singing God’s praises: “Glory to God in the heavenly heights, Peace to all men and women on earth who please him.”

As the angel choir withdrew into heaven, the shepherds talked it over. “Let’s get over toBethlehem as fast as we can and see for ourselves what God has revealed to us.” They left, running, and found Mary and Joseph, and the baby Jesus lying in the manger. Seeing was believing. They told everyone they met what Gabriel had said about this baby. All who heard the shepherds were impressed.

Mary kept all these things to herself, holding them dear, deep within herself. The shepherds returned and let loose, glorifying and praising God for everything they had heard and seen. It turned out exactly the way they’d been told!

After Jesus was born in Bethlehem—this was during Herod‘s kingship—a band of wise men arrived in Jerusalem from the East. They asked around, “Where can we find and pay homage to the newborn King of the Jews? We observed a star in the eastern sky that signaled his birth. We’re on pilgrimage to worship him.”

When word of their inquiry got to Herod, he was terrified—and not Herod alone, but most of Jerusalem as well. Herod lost no time. He gathered all the high priests and religion scholars in the city together and asked, “Where is the Messiah supposed to be born?”

They told him, “Bethlehem, Judah territory. The prophet Micah wrote it plainly: It’s you,Bethlehem, in Judah’s land, no longer bringing up the rear. From you will come the leader who will shepherd-rule my people, my Israel.

Herod then arranged a secret meeting with the scholars from the East. Pretending to be as devout as they were, he got them to tell him exactly when the birth-announcement star appeared. Then he told them the prophecy about Bethlehem, and said, “Go find this baby. Leave no stone unturned. As soon as you find him, send word and I’ll join you at once in your worship.”

Instructed by Herod, the wise men set off. Then the star appeared again, the same star the wise men had seen in the eastern skies. It led them on until it hovered over the place of the baby. They could hardly contain themselves: They were in the right place! They had arrived at the right time!

The wise men entered the house and saw the baby in the arms of Mary, his mother. Overcome, they kneeled and worshiped him. Then the wise men opened their luggage and presented gifts: gold, frankincense, myrrh. In a dream, the wise men were warned not to report back to Herod. So they worked out another route, left the territory without being seen, and returned to their own country.

After the wise men were gone, Gabriel showed up again in Joseph‘s dream and commanded, “Get up. Take the baby and his mother Mary and flee to Egypt. Stay until further notice. Herod is on the hunt for this baby, and wants to kill him.”

Joseph obeyed. He got up, took the baby and his mother Mary under cover of darkness.

They were out of Bethlehem and well on their way by daylight. They lived in Egypt until Herod‘s death. This Egyptian exile fulfilled what Hosea had preached: “I called my son out of Egypt.” 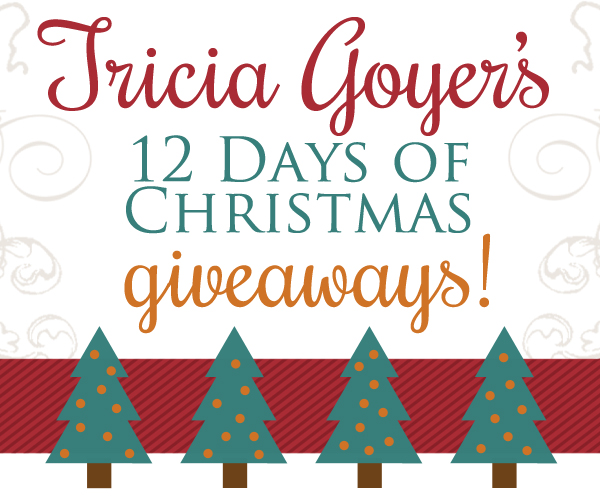 I’m celebrating Christmas with my favorite blog readers by giving away a different book pack each day! Today’s book pack is the Fiction Pack, which includes: Sweet September, Songbird Under a German Moon, and Love Finds You in Glacier Bay. Winners will be announced on my blog on Christmas day!