At least once a day I get an email from one of my WWII veteran friends, or from one of the historians I met while researching for my WWII novels. At least once a week I get handwritten notes in the mail … messages from the men who mean so much to me. Adopted Grandpas. 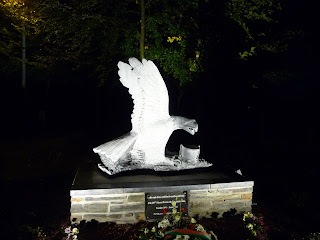 Yesterday I received this note from Roger Marquet, WWII historian. If you’re heard me tell some of the “stories behind my novels” then you’ve surely heard about Roger. He was an answer to prayer during my writing of Arms of Deliverance. He’s continued to be a good friend.

Below is a note from Roger on a new monument erected in Bastogne. I love what the monument has to say:

May this eagle always symbolize the sacrifices and heroism of the 101st Airborne Division and all its attached units.

December 1944-January 1945
The City and the Citizens of Bastogne 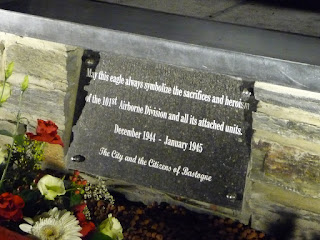 May each of us take a moment to remember the sacrifices and heroism of those who’ve gone before us. Thank you, brave men and women!

Recently, on Friday September 26, 2008, a brand new monument concerning the Battle of the Bulge was dedicated in Bastogne, Belgium, in the presence of H.E. the Ambassador of the United States of America in Belgium, Sam Fox and the one of the Deputy Mayor of Bastogne Philippe Collard, the presence of the Secretary of State for Wallonie Benoit Lutgen. A delegation of the real 101st Airborne Division – Air Assault constitued the Color Guard and they specially came from Fort Campbell, Kentucky. A bunch of other V.I.P. was present too and of course, al ot of people from Bastogne, from other parts of Belgium, from the Netherlands, from Luxembourg, … The school children were present too, a party of the 1st Artillerie Battalion of Bastogne rendered the honors.

Sculpted in a 2 tons stone block, the statue represents the bald eagle, symbol of the USA. All the job was made by an inhabitant of Bastogne, Robert Remacle. He was supported by the Communal College, most of the commerces of the city and the Services of the City.

It is dedicated to the 101st Airborne Division and the other attached units for the period of the City encirclement, from Dec.21 ’til Dec.26, 1944.

All the best ,
Roger (Historic Counselor for the Monument) 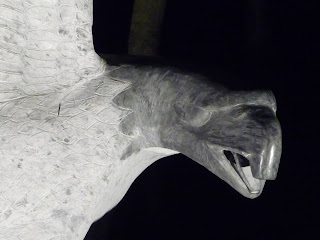