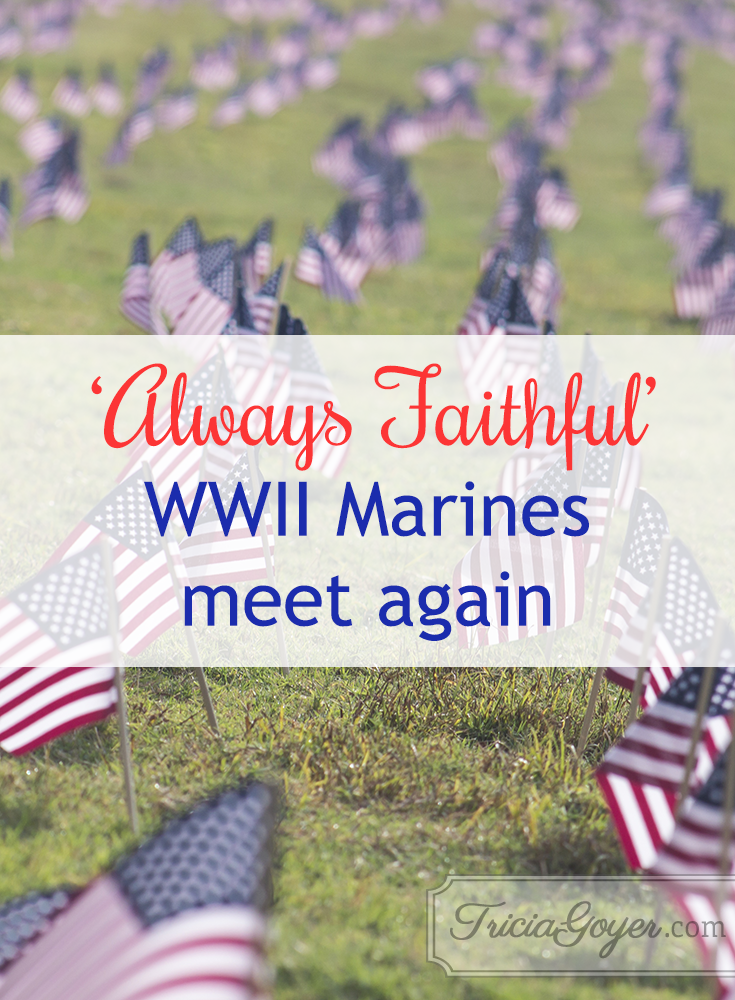 My friend Connie Pettersen sent me this amazing story she wrote about two World War II Marines. She is a freelance writer for a local newspaper in Aitkin, MN. Enjoy the incredible story!

Two Marines from WWII were reunited on April 16th at Villa Health Care Center in Mora, MN. Neither had seen each other since boot camp days in the early 1940’s despite living less than 30 miles apart for over 50 years. A twist of fate allowed them to finally meet, proving truth really is stranger than fiction. 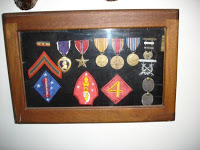 PFC Buck displayed extraordinary courage on several occasions. During the invasion of Saipan, Marianas Islands from 15 June to 9 July 1944, Buck was wounded five times and was evacuated to a hospital ship. His request to remain with his unit was overheard and granted by Lt. General H.M. Smith.

His Bronze Star Medal was for July 9th during a battle near the airfield on Marpi Point. That action was described in a letter from his unit’s Lieutenant, John C. Younglove, who dictated it to a hospital corpsman. Younglove said they had been closing caves on Marpi Point and were met by enemy grenades and rifle fire. Lt. Younglove was hit and down when a grenade came in. PFC Buck dived on that grenade before tossing it behind a rock where it exploded, shattering Buck’s right elbow.

An expert marksman, Buck continued fighting off attacking Japanese with a Tommy gun while using his left hand (he is right handed) and reloading between his knees. He kept the enemy down until a tank arrived. “If that tank hadn’t come and burnt them off us, or if he’d been two minutes later, it would have been a different story,” Buck said. “I only had five rounds left.”

Lt. Younglove died of his injuries, but his letter also recommended that PFC Buck be given a Congressional Medal of Honor. Unfortunately, his letter was placed in a Bible and sent home where a grieving mother, unable to open the footlocker, stored it in her attic. Younglove’s recommendation was not discovered for decades until the mother died and her daughter sorted through the belongings. (Congressman Oberstar tried to get the medal for Buck, but without a living witness to the event, it apparently was not to be).

After PFC Buck recovered from his battle injuries in the Pacific Islands, including losing part of his tongue in surgery after being shot in the jaw, he received orders he would be returning to duty. “I would have been in that first wave,” Buck said, “then they dropped that first bomb.”(Hiroshima).

After the war, Buck returned to the Minnesota farm in White Pine Township where he was raised. He married his sweetheart, Doris Bashore, raised five children, and expanded their farm over the years to 400 acres. Buck became an avid hunter and deadeye shot, earning recognition with the Minnesota DNR for shooting the most black bear in Minnesota. 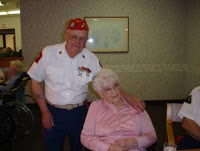 When his wife and soulmate of 62 years was diagnosed with Alzheimer’s, Buck dreaded the day when Doris would have to leave home. A few months ago, she was admitted to the Villa. Having kept Doris home as long as possible, he began driving 30 miles to visit her and started noticing a familiar-looking male resident. “It kept bugging me,” said Buck. “I knew I had to know him, and it just haunted me, that guy’s face.”

It took a lot of digging and questions to find out that the Villa resident was Russell Rule from the Isle area and that he’d been a WWII Marine drill instructor (DI) out of San Diego.

“That rung a bell,” said Buck, who contacted Rule’s wife and realized that Russell Rule, now 91, was his former DI from San Diego, a man he’d not seen in 67 years, but had never forgotten.

“I still have the broken toenail he stomped on to prove it,” said Buck, who recalled Rule screaming, “You’ll remember your left foot from your right from now on!” as he jammed his combat boot over Buck’s toes because he kept pivoting on the wrong foot.

“I never did get the chance to thank him for everything he did for us,” Buck said. “I have no doubt that he saved the lives of many men by training them to be good Marines. “I wanted to make sure he knew that.”

Buck went to his Heartland Marine Corps League and arranged for his former DI to receive official recognition. Through a coordinated effort with the Villa who planned a special program, Buck personally handed Rule his engraved plaque “from a bunch of beat up old Marines,” Buck said, “who all appreciated this man’s time and service.”

“It took a lot of yelling and pounding to get a snot-nosed kid like me (at age 17) ready for combat,” Buck said, pointing out that they stood at attention sometimes shivering, “but he made a working unit out of us! He made us watch out for the other guys’ butt, which kept us from being wiped out.” Rule also taught them never to leave anyone behind and they got every man out, even if in a body bag.

Today at age 84, Erv Buck continues to keep himself busy and active. He attends a Presbyterian church and is chaplain for Heartland MCL (Marine Corps League). He also enjoys woodworking. A current project is remodeling a kitchen wall to accommodate their new refrigerator. He also makes chairs, grandfather clocks, cedar chests, footlockers, and other items. Buck may be in his golden years, but refuses to retire. “The only time you retire is when your soles wear down to nothing and they throw dirt in your face.”

After six decades, Buck still suffers from war injuries. He’s had 12 surgeries on his arm and is scheduled for a 13th. He credits keeping busy and working with wood as “good physical therapy” for his sore arm. He doesn’t believe in taking time to feel sorry for himself, instead, he’s a humble, appreciative man who is very proud of his Marine heritage.

“After I recognized my former DI, I was just amazed that we’d lived in the same area all these years and never ran into each other.” Buck said. “Those drill instructors were a different breed of men, I’m telling you, and they had to be. I just knew I had to do something.”

Russell Rule, originally from Wisconsin, became a Marine DI at MCRD (Marine Corps Recruit Depot) San Diego in the 1940’s. He trained at least 13 platoons with 65 in each and has pictures of his units. Over 800 new recruits under his tutelage became combat-ready Marines, many returning home, others not so lucky. Rule also served in Guam and other places in the Pacific.

After the war, he moved back to Wisconsin, but his wife Norma had family near Isle, and the couple relocated there in 1950 and began farming.

“Russ became very active in the Color Guard, training them to march all over again,” said Mavis (Blomer) Rule, whom he married in 1996. “He is proud to be a Marine and he never missed attending a Memorial Day service.”

Rule also has been a community leader, serving as county commissioner and on the town board. For 10 years he was a substitute mail carrier and has been an active member at Faith Lutheran Church in Isle, serving on the church council and as head usher. Before retirement, he enjoyed farming, raising beef cattle and once owned as many as 22 horses. In 2005, he suffered a stroke and resides at the Villa.

After Rule was presented with his new hat and yellow ribbon from his former platoon recruit, Erv Buck, asked him, “Do you remember when you stepped on my toe, and I had to do ten push-ups?”

Having trained so many men, Rule hadn’t remembered that particular incident, but showed his sense of humor when Buck said, “I bet they went back to their barracks at night and laughed at us green recruits!” Sporting a wide grin and nodding, Rule said, “Yeah!” Then Buck asked his former DI if he’d ever realized he’d been talking to one of his former platoon members and Rule replied, “Not ‘til today!”

“There’s a hell of a lot of history here,” Buck said. “You had to respect these guys for what they did. It was guys like him that made us into men,” Buck continued. “That’s what I wanted to say on his award, ‘it’s from those snot-nosed kids’.” With tears in his eyes, Buck added, “It’s been a privilege to know you. You built some great Marines . . .you did one heck of a job.”

After handing Rule his new cap, Buck said, “I wanted it to say, ‘To an ugly toe-stomping DI,’ but we’ll have to settle for this: ‘Once a Marine, always a Marine.’

Buck said it took him a while to recognize Rule as his former DI because it had been a long time since he was 17. “But when these guys stomped on your toe, you kind of remember them!”

Russell Rule and Erv Buck have both earned tremendous respect for their WWII service. Now they also share hats with a motto Semper Fidelis, Latin for “Always Faithful.”

Some of us had tears in our eyes. When two WWII veterans meet after 67 years, it’s more than sharing two Latin words. It’s a bond. As strong today as it was decades ago, sharing their allegiance to a grateful nation and the US Marine Corps.

It’s also an honor to be around them.