You are here: Home / Uncategorized / Beyond the Night by Marlo Schalesky

They say love is blind.

As a woman lies unconscious in a hospital bed, her husband waits beside her, urging her to wake up and come home. Between them lies an ocean of fear and the tenuous grip of memories long past. Memories of wonder. Of love. Memories of a girl named Madison and a boy named Paul…

Madison Foster knew she was going blind. But she didn’t want pity—not from her mother, not from her roommate, and especially not from her best friend Paul—the man she secretly loved.

Paul Tilden knew a good thing when he saw it. And a good thing was his friendship with Maddie Foster. That is, until he started to fall in love.

With the music of the seventies as their soundtrack and its groovy fashions as their scenery, Maddie and Paul were drawn together and driven apart. Then one night changed everything…forever.

And only now, when life tiptoes past the edge of yesterday, along the rim of today, can they glimpse the beauty that awaits them…beyond the night. 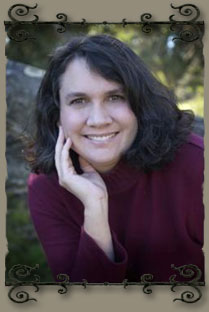 About Marlo:
Marlo Schalesky is the award winning author of six books, including her latest novel BEYOND THE NIGHT, which combines a love story with a surprise ending twist to create a new type of story. She has also had over 600 articles published in various magazines, had her work included in compilations such as Dr. Dobson’s Night Light Devotional for Couples, and is a regular columnist for Power for Living. Marlo recently earned her Masters degree in Theology from Fuller Theological Seminary and is currently working on more “Love Stories with a Twist!” for Waterbrook-Multnomah Publishers, a division of Random House. She owns her own construction consulting firm and lives in Salinas, California with her husband and four young
daughters.

And a Bit More about how Beyond the Night came about:

It was all God’s fault. And it started with a dream. Not one of those “I have a dream” kind of dreams, but a real, honest-to-goodness, it’s-3am-and-I’m-asleep kind of dreams. I dreamt Paul and Maddie’s love story. And when I woke up, I couldn’t get the two of them out of my head. I thought about them in the shower, on the way to seminary classes, in the grocery store. Everywhere! For weeks, I found myself replaying tidbits of their story in my mind, until I finally figured out that maybe God wanted me to write their story.

“But,” said I to God, “there’s not enough here. It’s not compelling enough.”

“Yes,” said God to me, “but Maddie’s going blind.” (Well, maybe it wasn’t so much in those words, but just in the revelation of what was going on with Maddie.)

“Oh,” said I, “That’s very interesting. But it’s still not enough. Not quite.”

Two more days went by, and Paul and Maddie’s story still kept teasing my mind. “It’s not enough,” I kept saying to God. “There’s got to be more.”

And then I saw it – the big twist. The incredible truth that I had no idea about before. It took my breath away. So, after I finished picking my jaw up off the floor, I sat down and starting working on the proposal for Beyond the Night.

As I fleshed out the story, I realized that this is exactly the type of book I’d like to keep writing – something with the poignancy of a Nicolas Sparks love story (without the sap!) matched with the knock-your-socks-off twist of a M. Night Shymalan movie (without the horror!). That kind of story excited me, spiritually, emotionally, mentally. And I figured that there had to be more people like me out there – people who want to be both moved emotionally and surprised and delighted intellectually. People who want to be changed, challenged, and caught with wonder by a story. That’s what I’m hoping for in Beyond the Night!

A Bit About the Story Behind the Story:

When my grandfather was going blind, he took a shotgun to the backyard and ended his life. He was a good man, kind and wise. Blindness didn’t change that. It wouldn’t have changed it. But the fear of it did.

It didn’t have to be that way. Today, there are 1.3 million people in the United States alone who are legally blind. Another nearly 9 million are visually impaired. Every day in this country people find out they are going blind. Seniors, mothers, fathers, children. Last year, it was my own mother.

So, Maddie’s journey through blindness and fear grows out of my family’s experiences. It also, in a broader sense, comes out of my own. For even though blindness is a specific malady, Maddie’s condition is also a metaphor for the dark times we all face. For the difficulties that come and rattle our faith, for those times when we can’t see what’s ahead, when life is masked by shadow and doubt.

For Maddie, losing her physical sight prompted her journey through doubt and fear. For me, it was infertility and miscarriage.

If there’s one thing I know about it’s living the life God has given you when it’s not the life you dreamed. Infertility taught me how to do that. It taught me that life takes unexpected turns and dark, difficult times come. And it taught me that it’s not the darkness that will destroy you, but the fear of it.

So, in many ways Beyond the Night explores my own questions, my own doubts, my own faith journey in facing the darkness, facing fear, with hope and dignity. That’s why Beyond the Night is about overcoming the fear of the unknown , rather than letting it overcome you. It’s about finding the light, the hope, the promise that lies beyond the darkness.

And I think we could all use that, whether we’re going physically blind or not.
Find out more, enter the BEYOND THE NIGHT CONTEST, see the trailer, read a sample chapter, and more at Marlo’s website at: http://www.marloschalesky.com/