I was out of town for the Christian Fiction Blog Alliance post about Scoop by Rene Gutteridge…so it’s a little late! But, that’s okay! 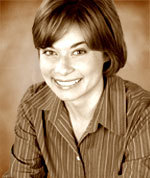 The Occupational Hazards Books are a series of books about seven homeschooled siblings whose last name is Hazard. The parents died in a freak accident leaving the kids ages 16-26 with a lucrative clown business but the kids realize that God has other plans which doesn’t include being a family of clowns for the rest of their lives.

Scoop, is the first of the series and centers around Hayden, who was age 20 when her parents died. If you haven’t yet guessed by the series title, this book is packed with many laugh out loud moments and great one liners.

Hayden is a strong Christian who, having been homeschooled, lacks some of the politically correct social norms…like not praying in front of everyone during a crisis. She finds herself in an internship at a television news station with a boss that takes stress pills, an aging news anchor that everyone wishes Botox on, a weatherman who wants to predict love for himself and Hayden, and a reporter struggling with his own politically correctness of being a good reporter and being a Christian.

The book link for http://www.renegutteridge.com/splash.html