Brandilyn Collins is the bestselling author of Violet Dawn, Web Of Lies, Dead of Night, Stain of Guilt, Brink of Death, and Eyes of Elisha just to name a few.

Brandilyn and her family divide their time between the California Bay Area and Coeur d’Alene, Idaho.

She also maintains an informative blog called Forensics and Faith where she daily dispenses wisdom on writing, life, and the Christian book industry. 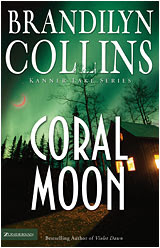 About the book:
The figure remained still as stone. Leslie couldn’t even detect a breath. Spider fingers teased the back of her neck.

Leslie’s feet rooted to the pavement. She dropped her gaze to the driveway, seeking…what? Spatters of blood? Footprints? She saw nothing. Honed through her recent coverage of crime scene evidence, the testimony as last month’s trial, the reporter in Leslie spewed warnings: Notice everything, touch nothing…

Leslie Brymes hurries out to her car on a typical workday morning…and discovers a dead body inside.Why was the corpse left for her to find? And what is the meaning of the message pinned to its chest?

In Coral Moon, the senseless murder of a beloved Kanner Lake citizen spirals the small Idaho town into a terrifying glimpse of spiritual forces beyond our world. What appears true seems impossible.