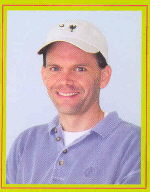 Ray Blackston of Greenville, South Carolina, worked as a buyer and a broker for eleven years before cashing in his modest 401k and leaving his corporate cubicle in 2000 to write full time. He is a graduate of the University of south Carolina, with a degree in Finance and Economics.
He serves on the drama team at his church, participates in a weekly men’s accountability group, serves on the missions committee of his church, has traveled to rural Ecuador on a summer missions program, and coaches his seven-year-old nephew, Action Jackson, in T-Ball.
When he is not crafting a new novel, is exploring south Carolina beaches with friends and family. He competes in golf tournaments, leads a writers’ critique group, and relives his youth through a large collection of eighties music!
His first novel Flabbergasted was one of three finalists for the Christy Award for best first novel, and was chosen as Inspirational Novel of the Year by the Dallas Morning News A Pagan’s Nightmare
Christians can buy gas for twelve cents a gallon, while everyone else (the pagans, that is) have to pay $6.66. The radio stations alter all song lyrics to conform to “Christian” standard–the Beatles belt out “I Wanna Hold Your Tithe”; ABBA’s “Dancing Queen” becomes “Dancing’s Wrong”. Even French fries, newly labeled “McScriptures”, are tools for evangelism.
Larry’s novel is a big hit with his agent, Ned. But Ned’s wife..a committed Southern Babtist…is less than amused. And Larry has yet to show the manuscript to his new girlfriend, even though he’s made her the unsuspecting heroine. It will take deft handling from both men to keep their lives and their relationships intact when the world witnesses A Pagan’s Nightmare.