You are here: Home / Podcast / Christmas with THE CHOSEN – In Theaters December 1!

Ready to spend Christmas with The Chosen?

If you haven’t seen The Chosen Television series, it’s something you have to watch. The Chosen is the first-ever multi-season series about the life of Christ, and after my family and I started watching it we understand why millions of people can’t stop talking about it. The actors do an amazing job bringing the Gospel to life. Each member of our family loves the way these stories are told. We find ourselves laughing and crying together. They are extraordinarily done. 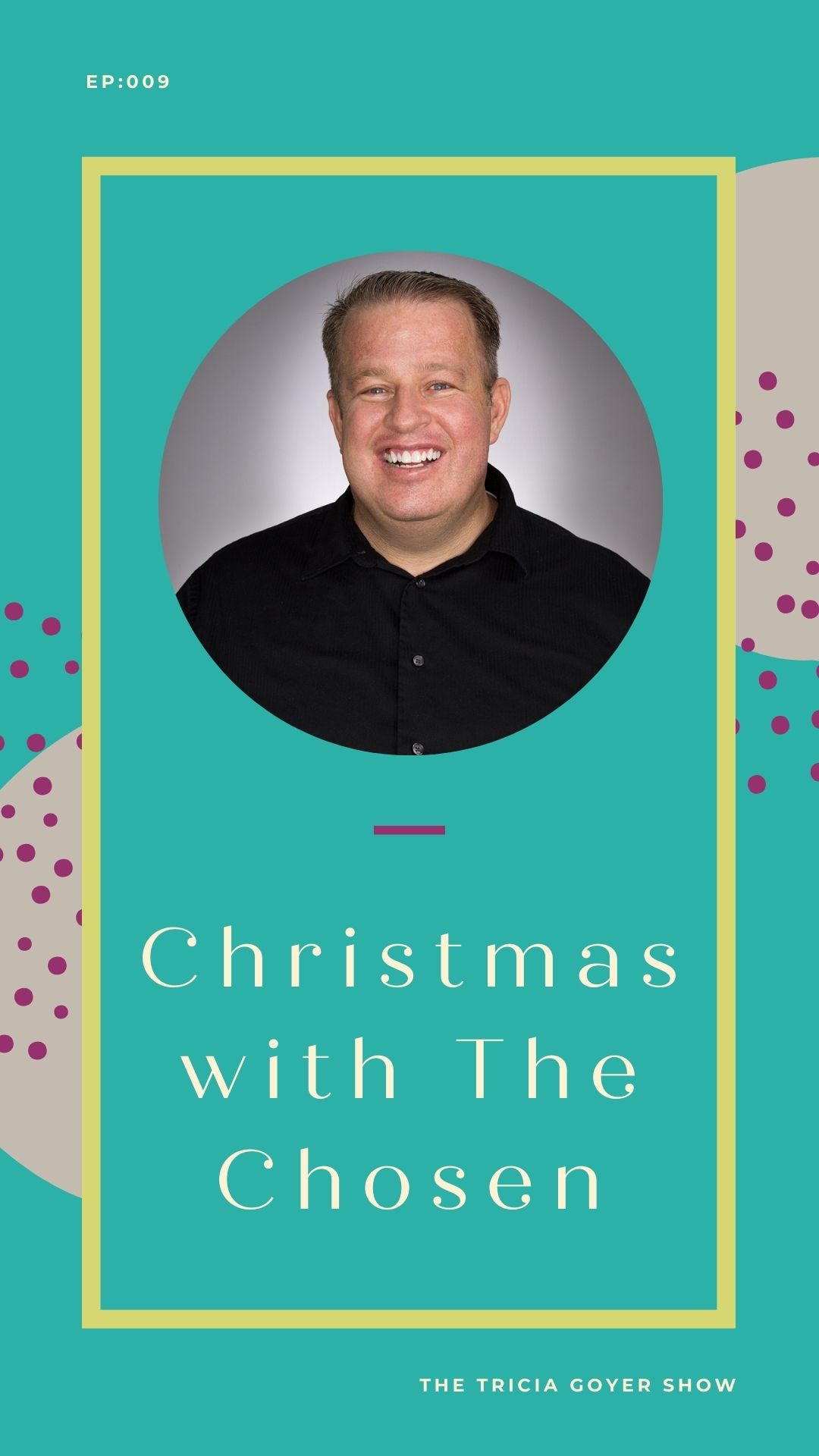 Christmas with The Chosen

On December 1, The Chosen is coming to theaters in a special event, but before we get to that, I want to share a favorite Christmas tradition … and one of my new releases. Exciting stuff!

First, our tradition: Our whole family gathers in our living room on Christmas Day. This includes John and me, our kids at home, our married kids and their spouses, our unmarried adult kids, and our grandkids. That’s a lot of people.

We eat a breakfast of danishes and cinnamon rolls, and then we experience The Christmas Story together. I say “experience” because we’ve been doing the same thing for almost twenty years. John reads the Christmas story, and each person has to listen for their special part, such as baby, manger, angel, etc. When their part is read they have to say a sound effect. (For example, every time that baby is mentioned they would say, “wah-wah!” It’s very interactive, and everyone pays attention to the Christmas story because they are listening for their parts.

We’ve shared our tradition, and now many families are enjoying it. You can find the printable here.

Also, my book Where Treetops Glisten is now on audiobook! This was written with my friends Cara Putman and Sarah Sundin. 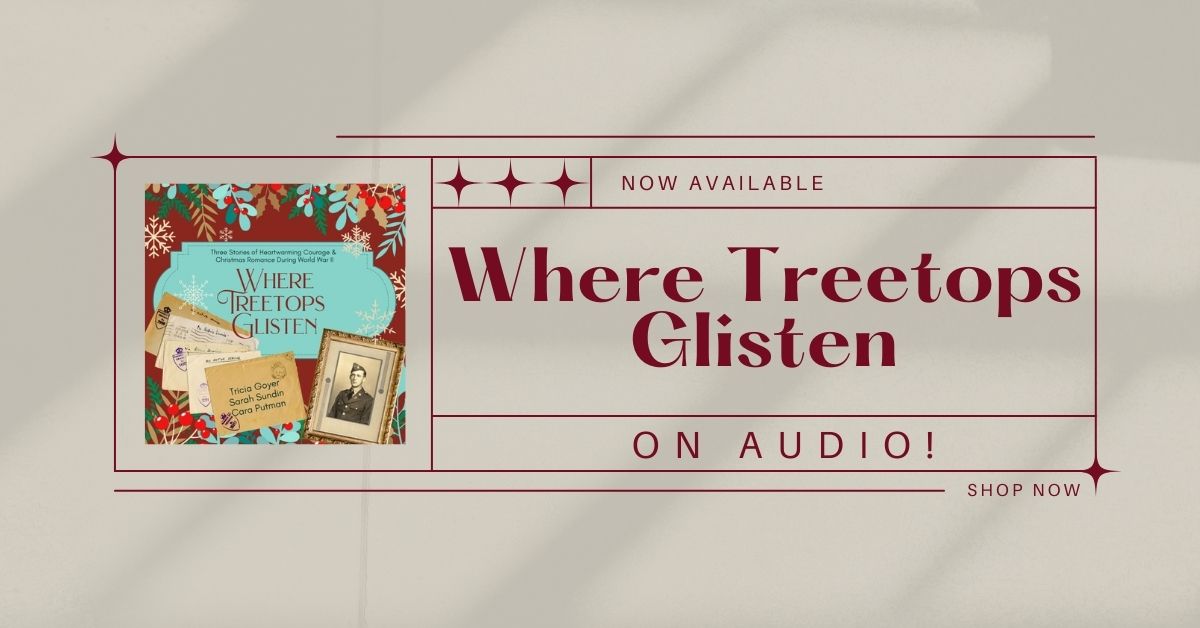 In Where Treetops Glisten, siblings forge new paths and find love in three stories filled with the wonder of Christmas.

Turn back the clock to a different time, listen to Bing Crosby sing of sleigh bells in the snow, as the realities of America’s involvement in the Second World War change the lives of the Turner family in Lafayette, Indiana.

In Cara Putman’s White Christmas, Abigail Turner is holding down the Home Front as a college student and a part-time employee at a one-of-a-kind candy shop. Loss of a beau to the war has Abigail skittish about romantic entanglements—until a hard-working young man with a serious problem needs her help.

Abigail’s brother Pete is a fighter pilot hero returned from the European Theater in Sarah Sundin’s I’ll Be Home for Christmas, trying to recapture the hope and peace his time at war has eroded. But when he encounters a precocious little girl in need of Pete’s friendship, can he convince her widowed mother that he’s no longer the bully she once knew?

In Tricia Goyer’s Have Yourself a Merry Little Christmas, Meredith Turner, “Merry” to those who know her best, is using her skills as a combat nurse on the frontline in the Netherlands. Halfway around the world from home, Merry never expects to face her deepest betrayal head-on, but that’s precisely what God has in mind to redeem her broken heart.

The Turner family believes in God’s providence during such a tumultuous time. Can they absorb the miracle of Christ’s birth and His plan for a future?

You can find the audiobook at these locations!

Now, for the exciting news!

CHRISTMAS WITH THE CHOSEN: THE MESSENGERS will be the Christmas event of 2021. It will be on the big screen so it may be seen by audiences nationwide.

Shot entirely in secret, THE MESSENGERS shows the birth of Christ through the eyes of Mary and Joseph and features actors from The Chosen series.

You can buy Tickets Now at FathomEvents.com

This event also features performances from extraordinary Christian artists and groups including Phil Wickham, Maverick City Music, For King and Country, Brandon Lake, and many more.

The event takes place in movie theaters beginning Dec. 1. New screens and playdates are being added to accommodate demand, and TheChosen.tv/Christmas will have the latest information for your area. CHRISTMAS WITH THE CHOSEN: THE MESSENGERS is released through Fathom Events.

“When we decided to do a special Christmas episode, we knew it would be the ideal moment to get this on the big screen,” said Dallas Jenkins. “It’s the first chance Chosen fans have had to gather all over the country, so we intend to make it worth it. And with all the incredible musicians assembled, this is a perfect event for inviting friends.”

The Chosen completed its second season in the spring continuing its unprecedented success as the No. 1 highest crowd-funded project of all time. It has been translated into 50 languages and counting and consistently ranked in the top 50 entertainment apps on iOS and Android. It is completely free to watch on the app that connects directly to streaming devices with no fee or subscription necessary and generates income for future seasons when viewers choose to “pay it forward” after viewing. The Chosen is produced by Loaves & Fishes Productions and distributed by Angel Studios.

This is something you don’t want to miss. Listen in and enjoy hearing what’s in store! 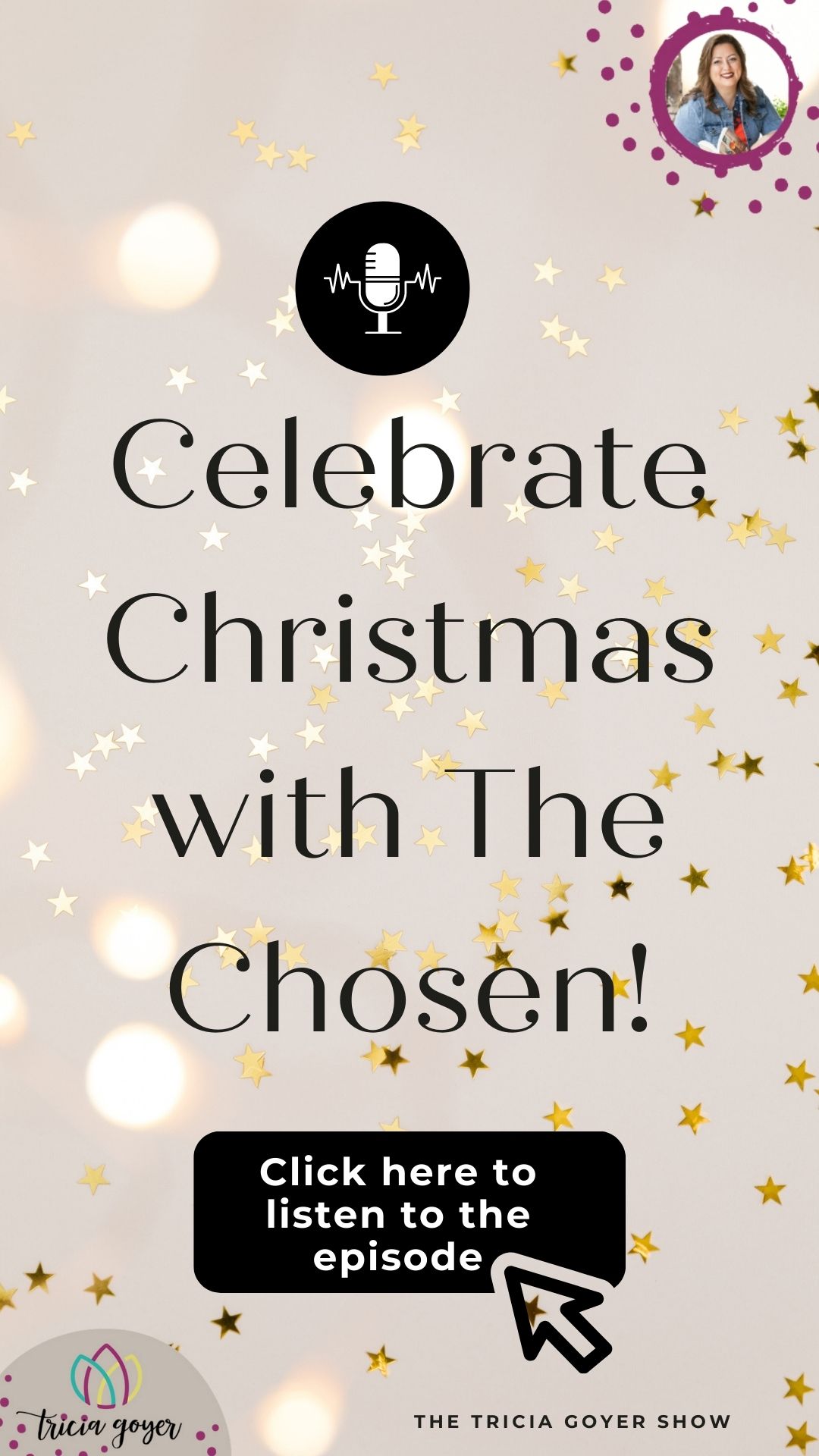 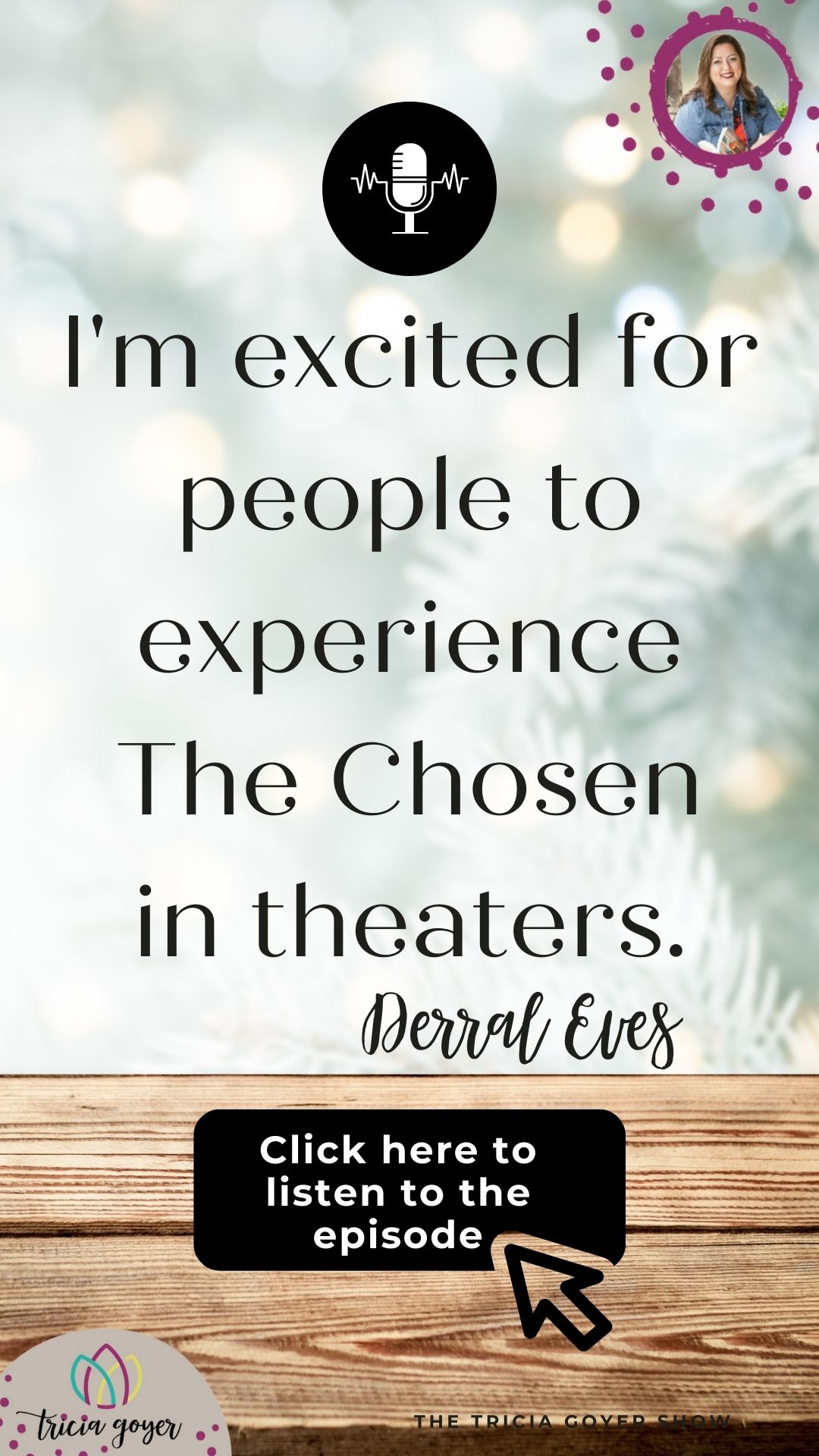 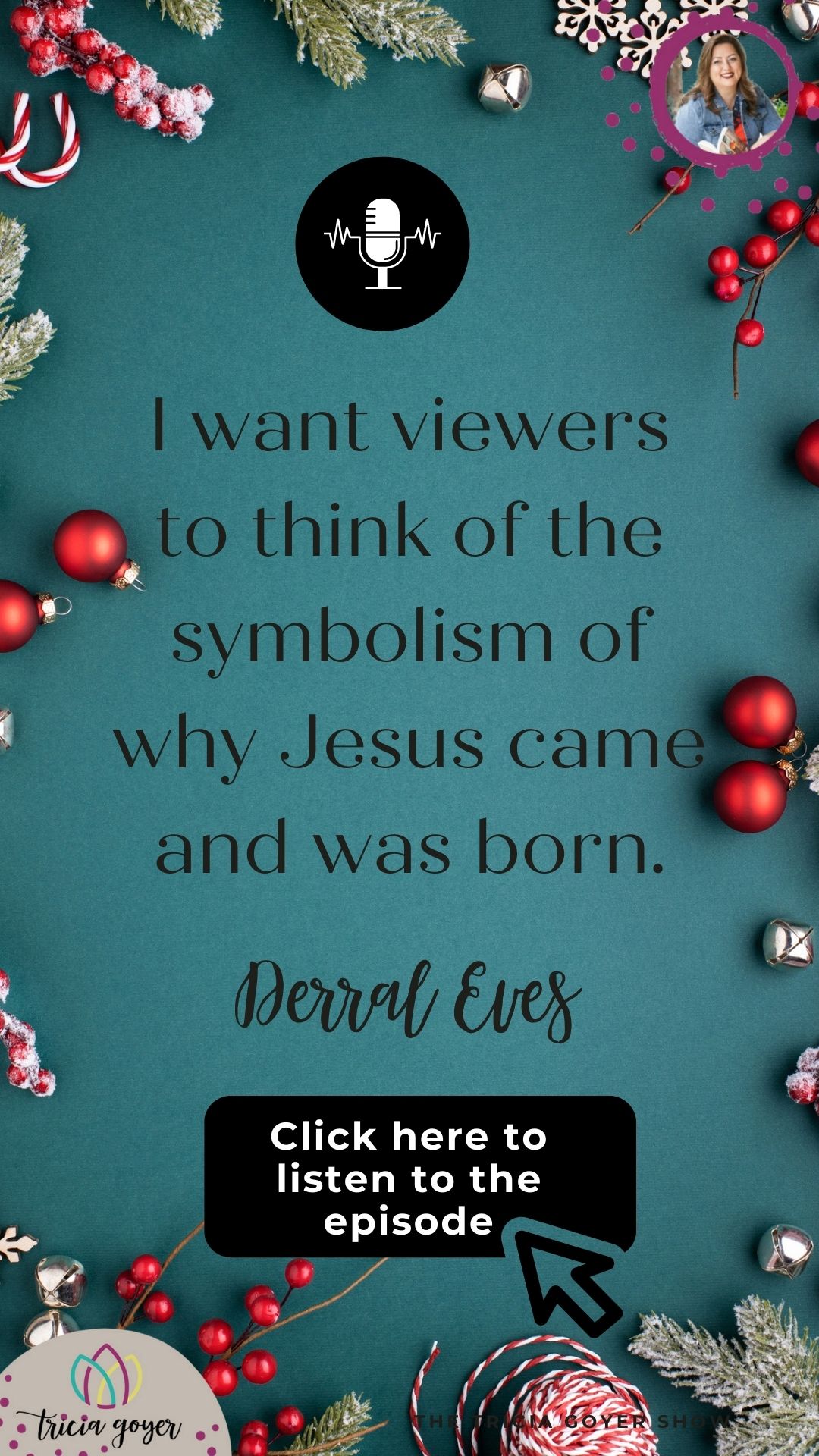 For to us a child is born, to us a son is given, and the government will be on his shoulders. And he will be called Wonderful Counselor, Mighty God, Everlasting Father, Prince of Peace. Isaiah 9:6 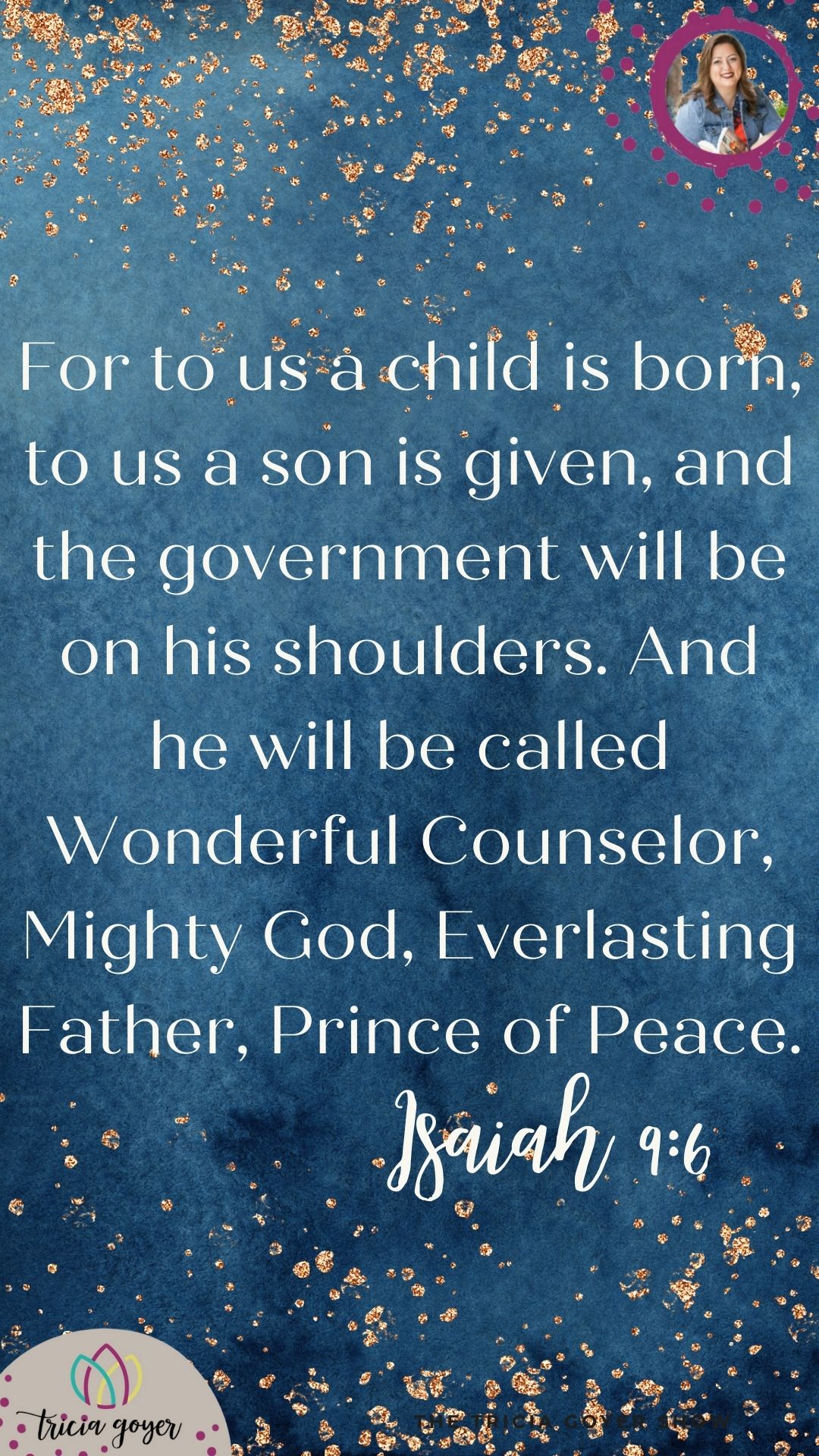 Who is Derral Eves

Derral Eves is the executive producer of The Chosen, the highest-grossing crowdfunded movie or television project of all time. The Chosen series reaches across religious boundaries to give viewers from all walks of life a non-denominational, non-Hollywood portrayal of the life of Jesus Christ and the people who encountered Him. Derral’s unique skills in audience development and project distribution account for much of the project’s worldwide exposure and success. Derral has worked on countless video projects for two decades—but when he came across The Chosen, he felt like everything he had done in his career and personal life had been leading to this project. It is his No. 1 career passion and focus.

Derral is CEO of Creatus, a video marketing strategy company, and the founder of VidSummit, an annual event in Los Angeles for video creators and marketers. He has helped 24 YouTube channels go from zero to more than a million subscribers, and he has generated 54 billion views on YouTube. Derral’s personal and career mission is to help individuals, brands and businesses make a positive impact in the world, but his greatest passion is his family: his wife, Carolyn, and their five amazing children, Elle, Logan, Kelton, Thatcher, and Bridger.

Special thanks to the November sponsors