You are here: Home / Uncategorized / Do Hard Things! 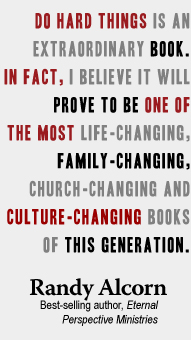 See…you don’t have to be old and grown-up to make a difference!

ALEX AND BRETT HARRIS founded TheRebelution.com in August 2005 and today, at age 19, are among the most widely read teen writers on the Web.

The twins are frequent contributors to Focus on the Family’s webzine Boundless, serve as the main speakers for The Rebelution Tour conferences, and have been featured nationally on MSNBC, CNN, NPR, and The New York Times, as well as in publications like WORLD magazine, Breakaway, and Ignite Your Faith. Their first book, Do Hard Things: A Teenage Rebellion Against Low Expectations, will be released on April 15, 2008, by Multnomah Books.

Sons of homeschool pioneers Gregg and Sono Harris and younger brothers of best-selling author Joshua Harris (I Kissed Dating Goodbye), Alex and Brett have a passion for God and for their generation. Their personal interests include politics, filmmaking, music, basketball, and soccer. And food. They like food.

When they’re not traveling around doing conferences, Alex and Brett live with their parents and three younger siblings near Portland, Oregon, where they attend Household of Faith Community Church. They plan to enter college together in the fall of 2008 — and continue to write, speak, and blog.

What is a Rebelution you ask? If this is all news to you, The Rebelution is “a teenage rebellion against low expectations.” It is not just another youth ministry. Though it is not at all legalistic, it does not indulge teens in their usual laziness and consumerism. It is rooted in the Gospel itself and in God’s eternal purpose in sending Jesus Christ to die for our sins. It speaks to teens as young adults who are expected to shoulder real responsibility for making their own family, church and nation godly and strong. It asks teens to stop living like guests in their own homes and instead take their place on the family team. It’s battle cry is Do Hard Things. Think about that. 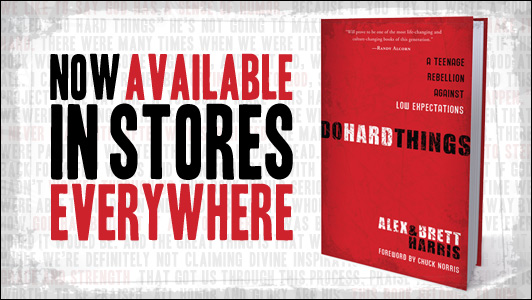 About the book: The next generation stands on the brink of a “rebelution.”

With over 16 million hits to their website TheRebelution.com, Alex and Brett Harris are leading the charge in a growing movement of Christian young people who are rebelling against the low expectations of their culture by choosing to “do hard things” for the glory of God.

Written when they were 18 years old, Do Hard Things is the Harris twins’ revolutionary message in its purest and most compelling form, giving readers a tangible glimpse of what is possible for teens who actively resist cultural lies that limit their potential.

Combating the idea of adolescence as a vacation from responsibility, the authors weave together biblical insights, history, and modern examples to redefine the teen years as the launching pad of life and map a clear trajectory for long-term fulfillment and eternal impact.

Written by teens for teens, Do Hard Things is packed with humorous personal anecdotes, practical examples, and stories of real-life rebelutionaries in action. This rallying cry from the heart of revolution already in progress challenges the next generation to lay claim to a brighter future, starting today. Read an excerpt.