You are here: Home / Uncategorized / Fire! 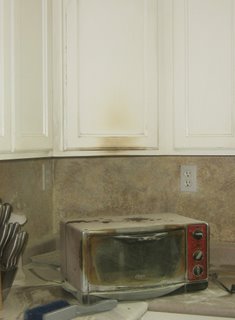 Today I was supposed to be working on my novel AND some articles I have due. I slept in, because I’m still feeling sick with a sore throat. I helped my son with his homework, and then when I sat down to write … that’s when I heard the smoke alarm.

Turns out my grandma (who also lives with us) put a tortilla in the toaster oven. Somehow it caught on fire and shot a two-foot flame out!

My grandma called, “Fire! Fire!” The fire alarm was WAILING!

My 14-year-old daughter was in the next room practicing her piano. Leslie jumped up and used the fire extinguisher to put out the flames.

Then … My 17-year-old was leaving for his classes (he takes some classes at the college). He was so shook up that when he back out of the driveway he didn’t notice his uncle’s car parked in the driveway behind his. CRASH! (My brother-in-law is living with us for a few weeks because he just got a job in town. The car was just dropped off this morning by the moving company.)

Thankfully, the cars hit bumper to bumper. My brother-in-law’s car has a 3-inch scratch. My son’s bumper has a HUGE hole in it.

Sigh, a day in the life of a Christian author!