You are here: Home / books / Ghostwriter by Travis Thrasher 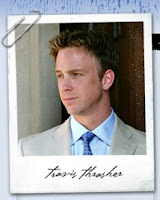 It was during third grade after a teacher encouraged him in his writing and as he read through The Narnia Chronicles by C.S. Lewis that Travis decided he wanted to be a writer. The dream never left him, and allowed him to fulfill that dream of writing fulltime in 2007.

Travis Thrasher is the author of numerous works of fiction, including his most personal and perhaps his deepest work, Sky Blue, that was published in summer of 2007. This year he has to novels published, Out of the Devil’s Mouth, and a supernatural thriller, Isolation.

Travis is married to Sharon and they are the proud parents of Kylie, born in November, 2006, and Hailey, a Shih-Tzu that looks like an Ewok. They live in suburban Chicago. 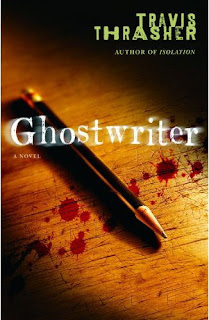 For years Dennis Shore has thrilled readers with his spooky bestselling novels. Now a widower, Dennis is finally alone in his house, his daughter attending college out of state. When he’s stricken by a paralyzing case of writer’s block and a looming deadline, Dennis becomes desperate. Against better judgment, he claims someone else’s writing as his own, accepting undeserved accolades for the stolen work. He thinks he’s gotten away with it . . . until he’s greeted by a young man named Cillian Reed–the true author of the stolen manuscript.

What begins as a minor case of harassment quickly spirals out of control. As Cillian’s threats escalate, Dennis finds himself on the brink of losing his career, his sanity, and even his life. The horror he’s spent years writing about has arrived on his doorstep, and Dennis has nowhere to run.

If you would like to read the first chapter of Ghostwriter, go HERE