You are here: Home / Uncategorized / God in Pursuit: The Tipping Points from Doubt to Faith

Enjoy this Guest Post by Joseph Bentz about God in Pursuit. 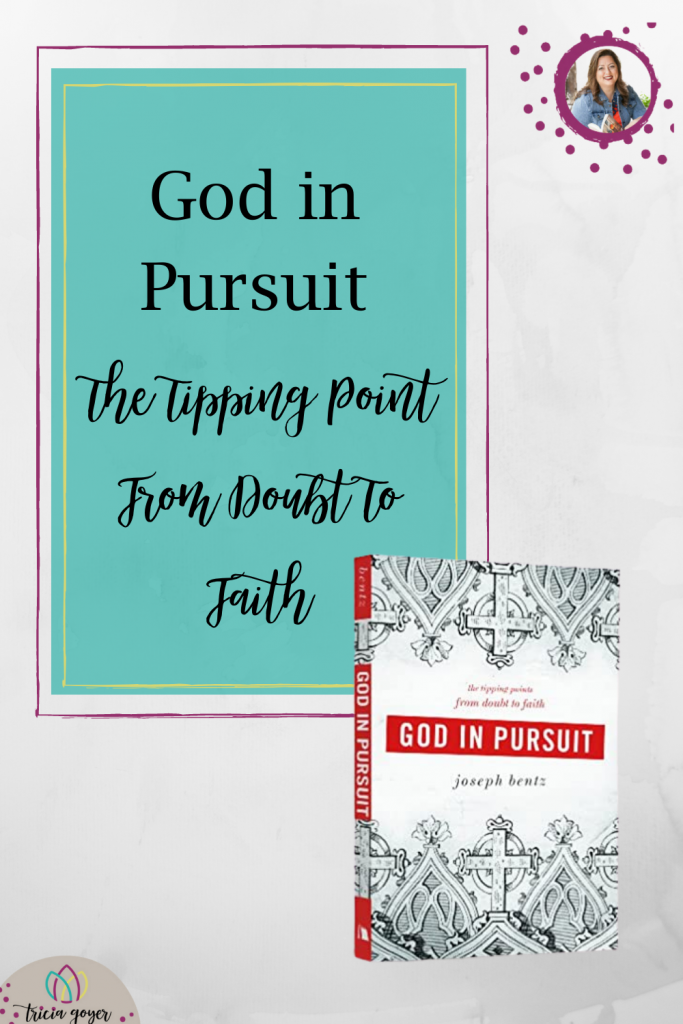 Why did you decide to write this book?

God in Pursuit: The Tipping Points from Doubt to Faith, originally started as a book on doubt. I wondered, what role does doubt play in the life of a Christian? Should Christians fear it? Should they try to stamp it out? Or are there ways in which doubt plays a role in leading a Christian to deeper understanding?
As I worked on those doubt issues, I began to wonder, what leads people to faith in the first place? Why—and how—do people who are downright hostile to Christianity end up as passionate followers of Jesus Christ? Are there common factors that allow them to make that leap of faith? The factors (or “tipping points”) that allow people to move from disbelief to faith are now the central focus of the book, and I also deal with how those same tipping points operate later in the Christian life as believers work through crises of doubt to reach deeper levels in their walk with God.

Your book talks about God unsettling people’s lives. Can you give examples? How does this impact their Christian journey?

In conducting interviews and reading dozens of spiritual memoirs in preparation for this book, what surprised me most is how vigorously God pursues even those who seem least likely to follow him. The first chapter of the book is called, “I Didn’t Want to Be a Christian, But….” It’s a chapter about reluctant converts, and I found their stories some of the most inspiring because even though they start out completely antagonistic to God and want nothing to do with him, once he shows up in their lives, he changes everything.

“Big Jim” Vaus was a wiretapper for the mob who wanted nothing to do with God until he happened to walk into a Billy Graham crusade on his way to do a job for crime boss Mickey Cohen. He sensed the overwhelming presence of the Holy Spirit that night and turned his life over to Christ. He later made restitution to all the victims of his crimes. Sara Miles wanted nothing to do with Christianity until she wandered into a church one day and encountered Jesus Christ when she took communion. Anne Lamott sensed Christ’s presence in the corner of her room as she lay in bed sick and strung out. This is what I mean by how God is unsettling in people’s lives. Even after conversion, people still have to work through the questions and doubts and objections that had kept them away from God, but now they work through these things as believers. I was amazed at how God works.

Help us better understand “foreshadowing.” What does this look like in a person’s faith walk?

When people tell their stories of how they turned to Christ, their conversions often sound “sudden” because they didn’t expect God to show up in their lives when he did. But as I looked into these stories further, I found that conversions were almost never as “sudden” as they looked. As people look back on their stories, they can almost always find “clues” planted by God across the years that indicate he was pursuing them all along. Those clues are what I call foreshadowing, just as a novelist plants clues along the way that will only have significance for the reader after the full story unfolds.

Foreshadowing takes many forms. It may be a conversation with a Christian that doesn’t bear fruit until years later. It may be an overheard song about Jesus that you just can’t get out of your head. It may be a verse from the Bible that you keep running across wherever you look. It may be a positive relationship with a Christian family that pushes you just a little closer to God. As Christians, we are often part of the foreshadowing of someone’s faith in Christ, even if we never become fully aware of the part we play in that person’s move toward faith.
The Holy Spirit comes to us in different ways during our lives. What does “Loaded Time” mean?

“Loaded Time” is a rough translation of the Greek word kairos that is found in scripture. There is no exact equivalent for this word in English. Loaded time describes moments, separated from all the ordinary minutes and seconds of life when time is particularly filled not only with God’s presence but also with the opportunity to reach him. We can say yes to him, we can say no, but somehow all the foreshadowing, the clues, the prowling pursuit of God’s Spirit has led us to this moment, and we must decide.

Have you ever read a verse of scripture a hundred times and it left you cold, but then you read it one more time and you finally get it in a way that leaves you stunned? Have you ever been profoundly moved by a sermon that seemed to bore everyone else? Those are examples of “loaded time.” I found that many conversions happen at just such times. From the outside, the circumstances look quite ordinary, but the Holy Spirit has so “loaded” that moment that it becomes a transforming time in the person’s life.

What can we—as members of Christ’s body—do to reach unlikely followers?

I would stress two answers to this question that stood out to me as I researched and wrote this book. The first is that we should never give up on anybody as a potential follower of Christ. I ran across too many unlikely candidates for Christianity who became Christians anyway to believe that anyone is a lost cause. So if you’ve been praying for someone to come to Christ, even if you’ve been praying for years, keep doing it. You never know how close the person may be to the “loaded time” that will change everything.

The second thing I would say is that as Christians, we never know the part we are playing in a person’s move toward Christ. We may be there at the time of the person’s conversion, or we may be there decades earlier, planting a “clue” that will make sense in a person’s faith journey years after we are gone. It’s a mistake to think that even the small things we do for Christ are insignificant. 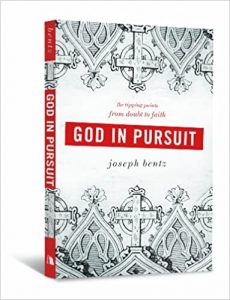 I would just mention that  God in Pursuit: The Tipping Points from Doubt to Faith is designed for individual reading or for use in small groups. A free downloadable Study Guide is available that leads groups through a six-week study of the book.

Thank you to Joseph for taking the time to share with me! I encourage you to take a look at his book for yourself!

More about Joseph Bentz. Joseph  is the author of four novels and three non-fiction Christian living books, including God in Pursuit: The Tipping Points from Doubt to Faith  More information about his books and speaking is available at his website, http://www.josephbentz.com.