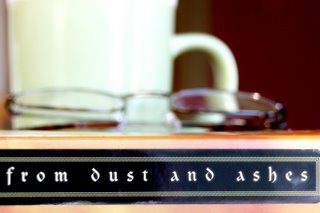 My grandfather was a World War II veteran. This bit of information was something that everyone in our family knew, but no one talked much about. When my grandfather lived with my family during the last four months in his life, we spoke about many things. Of his time growing up during the Depression. Of his antics with his ten brothers and sisters, but never about World War II.

Grandma once told me that my grandfather had served in Australia and New Guinea. He’d been injured and sent home. Shot in the leg, I believe.

One afternoon when I was in junior high, Grandpa and I sat cracking walnuts, and he mentioned returning home across the South Pacific on a hospital ship for troops.

“Was the longest month of my life,” Grandpa said. “Many guys didn’t make it.”

It was hard to imagine him young and strong, fighting in distant lands. What did he experience? Did he lose any friends? What had it been like for a young, Kansas boy to be so far from home?

I noticed tears in his eyes and didn’t prod. Now I wish I had. After my grandpa passed away I realized I’d lost his stories too.

My interest in World War II grew when I visited Austria in 2000, joining two author-friends on a research trip. One of them had an appointment to meet a historian at a concentration camp the Americans had liberated. Martha, the historian, invited our trio into her home, serving up tea, rolls, and cheese, plus a large helping of stories from World War II.

“The American GIs are still hailed as heroes by the survivors I interview,” Martha said, leaning in close. “Especially the first group of twenty-three men who arrived at Gusen and Mauthausen camps. They freed 25,000 survivors at each place, you know.”

“Twenty-three men freeing so many?” I raised an eyebrow and glanced to my two friends. “I’d love to hear more.”

“They were Americans from the 11th Armored Division,” Martha continued. “A small unit was on reconnaissance, checking the roads and bridges and scouting German strongholds.

“The Americans had no idea the camp existed until a Red Cross worker led them to the barbed wire fortresses. The worker urged the GIs to take control of the premises before there was any more loss of life. Those twenty-three brave men opened the gates and took control from Nazis eager to surrender.”

Martha told many more stories to our small group, but it was the true tale of the American GIs that wouldn’t leave my thoughts.

Upon arriving home, I decided to write a novel inspired by the actual events. I started by weaving fictional characters with true elements. As I studied the events of 1945, I wondered if any of the liberators were still alive and willing to tell their stories. Hopeful, I contacted the 11th Armored Association, and I was not disappointed.

Within a few days, I had the names, phone numbers, and addresses of eleven of the original men. In addition, I was invited to attend the 58th reunion of their division. I eagerly accepted.

When I arrived at the reunion, I expected it to take a couple of days for the veterans to warm up to me. Instead, a line formed as they couldn’t wait to be interviewed. The veterans had brought memoirs, photographs from 1945, and other mementos to share.

The first gentlemen I spoke with were Arthur and Charlie—two of the original twenty-three. Charlie had been a replacement, joining the division in Germany as the armored division spearheaded toward the furthest lines of Nazi defense. Arthur, a seasoned soldier by this time, had taken the young recruit under his wing. Even after sixty years, the two veterans completed each other’s sentences and teared up as they related their experiences.

After two hours, Arthur and Charlie rose from their chairs and offered me a warm embrace. Their arms reminded me of my grandfather’s, and I snuggled in close.

“Thank you for sharing our stories,” Charlie smiled down at me.

“Now, remember, get someone handsome to play me in the movie,” added Arthur with a wink and a smile.

Those first interviews were just the beginning of an amazing connection with these veterans.

Through the coming months as I wrote From Dust and Ashes, I often contacted my new friends for information and advice. With tenderness and appreciation, they helped to shape my story into something we all were proud of.

“I felt like I was there again,” said another veteran, Pete, upon reading the final manuscript. “It took me back sixty years.” It was the best compliment I could receive, but my connection with these men didn’t stop there.

During one of my interviews, another veteran told me about an orchestra of prisoners that had met the GIs as they entered the camp gates. The orchestra was made up of world-renowned musicians who’d been arrested and imprisoned by the Nazis. Yet because of the German’s love of music, the lives of the men in the orchestra were spared. This sparked my imagination and led to my second novel, Night Song. Once again, I turned to the men in the 11th Armored Division for information and support.

Looking back, I’m awed by how God put all of this in motion. From one, small spark of an idea, two novels were birthed. Then three, four, five. But more important than that, God brought me into the lives of men, like Arthur, who were thrilled to share these stories during their last years, knowing their experiences will not be forgotten.

On a weekly basis, I still receive cards and letters from the veterans I interviewed. One arrived in the mail just today. These men thank me for writing their stories. Thank me for taking time to sit and listen. Taking time to care.

But through it all, I feel I’m the one most blessed. I’ve been allowed to hold the quivering hands of men who fought for our country’s freedom—and for the freedom of people on the other side of the world they’ll never meet.

I’ve been allowed to weep with those touched by war’s pain sixty years after the fact, and I’ve laughed at the antics of boys forced to fight as men.

Seven years after my grandfather’s death, I still regret never asking to hear his stories. But I’m also thankful for God’s second chance. I lost one grandfather whom I loved dearly, but God’s blessed me with dozens more. These are men I will forever hold in my heart and whose stories I will never forget.

I passed you on the street,
And did not know.
You are my grandfather,
My father,
My uncle,
And I did not ask.

I saw weak eyes,
Shaky hands,
Unsure steps.
Not realizing that inside was a warrior’s heart.

Those footsteps, steady and strong,
Once moved forward, facing death.
Realizing the cause was too great,
To stand and do nothing.

I will ask now.
And I will listen.
The warrior’s voice may tremble,
His eyes may tear.
But his stories will not be forgotten.

For more information about the true stories behind the novels go to: www.thegoyers.com/dustandashes or www.triciagoyer.com