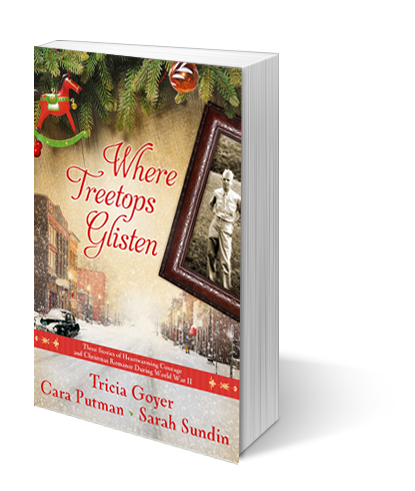 The crunch of newly fallen snow, the weight of wartime. Siblings forging new paths and finding love in three stories, filled with the wonder of Christmas

Turn back the clock to a different time, listen to Bing Crosby sing of sleigh bells in the snow, as the realities of America’s involvement in the Second World War change the lives of the Turner family in Lafayette, Indiana.

In Tricia Goyer’s Have Yourself a Merry Little Christmas, Meredith Turner, “Merry” to those who know her best, is using her skills as a combat nurse on the frontline in the Netherlands. Halfway around the world from home, Merry never expects to face her deepest betrayal head on, but that’s precisely what God has in mind to redeem her broken heart.

The Turner family believes in God’s providence during such a tumultuous time. Can they absorb the miracle of Christ’s birth and His plan for a future?

By the Light of the Silvery Moon 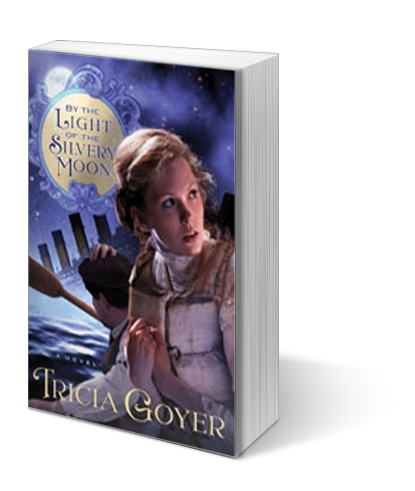 Amelia Gladstone’s hopes are tied up in the Titanic–hopes for a reunion with her sister and an introduction to an admirer. But when she offers a spare ticket to a down-and-out young man, her fate is about to change.

Quentin Walpole is stunned when a sweet lady secures his passage to America–and even more surprised to find his wealthy father and older brother on board the ship. Suddenly Amelia finds herself caught between the attentions of two men, but who should she entrust her heart to? As the fateful night arrives, will Amelia lose everything to the icy waters? 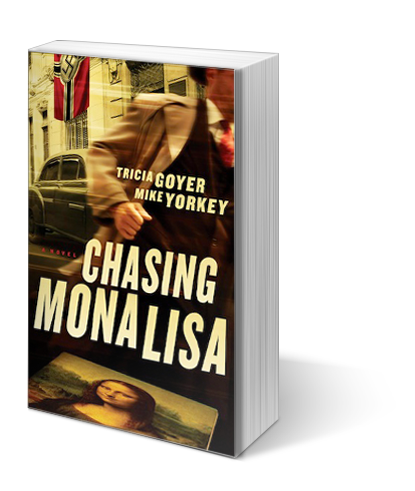 It is August 1944 and Paris is on the cusp of liberation. As the soldiers of the Third Reich flee the Allied advance, they ravage the country, stealing countless pieces of art. Reichsmarschall Hermann Göring will stop at nothing to claim the most valuable one of all, the Mona Lisa, as a post-war bargaining chip to get him to South America. Can Swiss OSS agents Gabi Mueller and Eric Hofstadler rescue DaVinci’s masterpiece before it falls into German hands?

With nonstop action, Chasing Mona Lisa is sure to get readers’ adrenaline pumping as they join the chase to save the most famous painting in the world. From war-ravaged Paris to a posh country chateau, the race is on–and the runners are playing for keeps.

35-year-old Ava Andrews’ dream job is interrupted by an unusual request–fulfill her 84-year-old grandfather’s last wish by joining him on a battle site tour of Europe. Ava is sure her boss will refuse her request. But, instead, he gives her a directive of his own–to videotape the tour and send it back as mini-segments for the show she produces.

As if juggling these two things isn’t hard enough, Ava is soon surprised again … twice. First, Ava and Grandpa Jack arrive in Europe, only to discover the tour is cancelled. Unwilling to let down her grandfather or her boss, Ava and Grandpa Jack head out on their own. Then, while they’re on their way, the pair soon meet up with Paul, her grandpa’s best friend, and his grandson Dennis. The same Dennis who just happens to be Ava’s first love.

Before she knows it, Ava and Dennis are swept down memory lane as they visit the sites that are discussed in the history books. And even though Ava’s videotaping old soldiers, she can see their youth, their hopes and fears, and their pride in their eyes. Soon Ava learns the trip isn’t just for them … it’s for her too–especially for her heart.

Discover the Story Behind the Book
Download the Discussion Guide

The war has stolen Rosalie’s fiancé, Vic, from her forever. But rather than wallow, Rosalie distracts herself by cramming her days full of activity—mainly by shooting rivets into the B-17 bombers that will destroy the enemy.

When a reporter dubs her “Seattle’s Own Rosie the Riveter,” even more responsibility piles up. Her strong arms bear all this, but when intense feelings surface for Kenny, the handsome, kind-hearted, and spiritually unwavering reporter, the fear of losing another love propels Rosalie to leave.

It’s only when Rosalie realizes that God has brought her to this place—and this person—for a reason, the sparkling grace of God compels her to let go of her own strength and lean on His, as well as open her heart to love.

Songbird Under a German Moon

The year is 1945. The war is over and 21-year-old Betty Lake has been invited to Europe to sing in a USO tour for American soldiers who now occupy Hitler’s Germany. The first nights performance is a hit.

Betty becomes enthralled with the applause, the former Nazi-held mansion they’re housed in and the attention of Frank Witt, the US Army Signal Corp Photographer. Yet the next night this songbird is ready to fly the coop when Betty’s dear friend, Kat, turns up missing.

Betty soon realizes Franks photographs could be the key to finding Kat. Betty and Frank team up against post-war Nazi influences and the two lovebirds’ hearts may find the answers…in each other.

But will they have a chance for their romance to sing? The truth will be revealed under a German moon.

In 1890, Julia Cavanaugh travels west from New York City to unite orphans in her care with new families.

Imagine her horror when she discovers that she’s to be “delivered,” too–as bride to an uncouth miner! But with no return fare, Julia’s options are bleak.

What does God have planned for her on the lonesome prairies of Montana?

Read an Excerpt
Download the Discussion Guide
Watch the Trailer

Working as a Swiss transcriptionist for the Americans during WWII, Gabi Mueller’s life changes overnight when she’s recruited as a spy for the precursor of the CIA.

Asked to safely courier a German physicist working on the budding Nazi atomic bomb project to the Swiss border, Gabi feels the weight of the war on her shoulders. But who can she trust?

Battles heat up… not only those being waged by the soldiers on both sides fighting for Spain, but in the hearts and minds of the men and women who must sacrifice more than their dreams to save the lives of their loved ones.

In this meticulously researched novel, brave and idealistic Sophie, Philip, Jose, and Deion realize their only hope for freedom is escaping Spain’s borders.

By continuing the story of this band of volunteers during the Spanish Civil War, A Whisper of Freedom proves that there are whispers of hope and liberty that resonate through even the darkest night.

Sophie discovers that nothing is as she first imagined. When Walt, the reporter who helped her over the border, shows up again after Guernica is bombed, Sophie is given an impossible mission. She must leave behind the man she’s fallen in love with and return to the person who betrayed her.

Another layer of the war in Spain is revealed as Sophie is drawn into the international espionage schemes that could turn the tide of the war and help protect the soldiers from the International Brigade … but can she find a way to get the information she’s discovered to Walt before it’s too late?

For reasons beyond her control, Sophie finds herself alone in the war-torn Spanish countryside. What was once a thriving paradise has become a battleground for fascist soldiers and Spanish patriots. It doesn’t take long for Sophie to realize just how far from home she really is.

Caught in the middle of what is quickly becoming a bloody battleground, she receives tragic news, but remaining in Spain is her only option. The route to safety is blocked and fighting surrounds her. On her darkest night, Sophie takes refuge with a brigade of international compatriots. It is among these volunteers, through the use of her fiancées camera and her art, that she pledges to make the plight of the Spanish people known around the world.

Arms of Deliverance – A Story of Promise

Two friends, Mary and Lee, land similar reporting jobs at the New York Tribune on the eve of the war’s outbreak and soon they become competitors.

Mary’s coverage of a bombing raid over Germany leads to a plane wreck and an adventurous escape attempt from across enemy lines. When Lee hears of Mary’s plight, she bravely heads to war-torn Europe in an effort to help rescue her friend.

Will there be enough time for diplomacy or will war get the best of everyone?

Dawn of a Thousand Nights – A Story of Honor 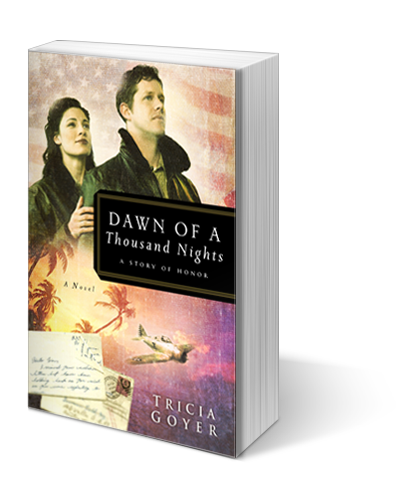 Daniel Lukens has two great loves: combat flying for the Army Air Corps and Libby Conners, a female pilot he met while stationed in Hawaii. Libby is a flight instructor, and their budding romance is put to the test when Dan is transferred to the Philippines.

Mere months after their parting, Pearl Harbor is bombed by the Japanese. Eight hours later, Clark Field on the Philippines is also bombed, propelling the Americans into the war and forcing the U.S. military forces on the island to fight with limited food, weapons, and supplies. Dan and the other soldiers bravely fight, only to find themselves prisoners of the Japanese.

Night Song – A Story of Sacrifice

Night Song is inspired by the orchestra started by prisoners in Hitler’s Mauthausen death camp.

Around this orchestra, four lives intertwine: a beautiful member of the Austrian resistance, the American GI who loves her, a young prisoner who fakes his way into the group in a desperate attempt to stay alive, and a Nazi officer who will stop at nothing to obtain the priceless violin he desires.

From Dust and Ashes – A Story of Liberation

Amidst the dark horror of 1945 Austria, a cowardly SS officer abandons his wife Helene as U.S. forces advance on Nazi death camps. Alone and guilt-ridden, Helene begins helping the holocaust survivors—and experiences her own liberation from spiritual bondage. But when she meets Peter, an American soldier who helped free the town’s concentration camp, will old shame overcome the promise of new hope and forgiveness?

Be sure to check out Tricia’s Coming Soon, Amish Fiction, Contemporary Fiction and Non-Fiction books pages,
or download a bibliography of all her books.