You are here: Home / being an author / How to Find Hope in the Darkness | Stories from WWII

In even the worst circumstances it’s possible to find hope in the darkness.  These stories helped me see the great hope even amidst the sadness and tragedy of war. I hope they bless you as much as they did me. 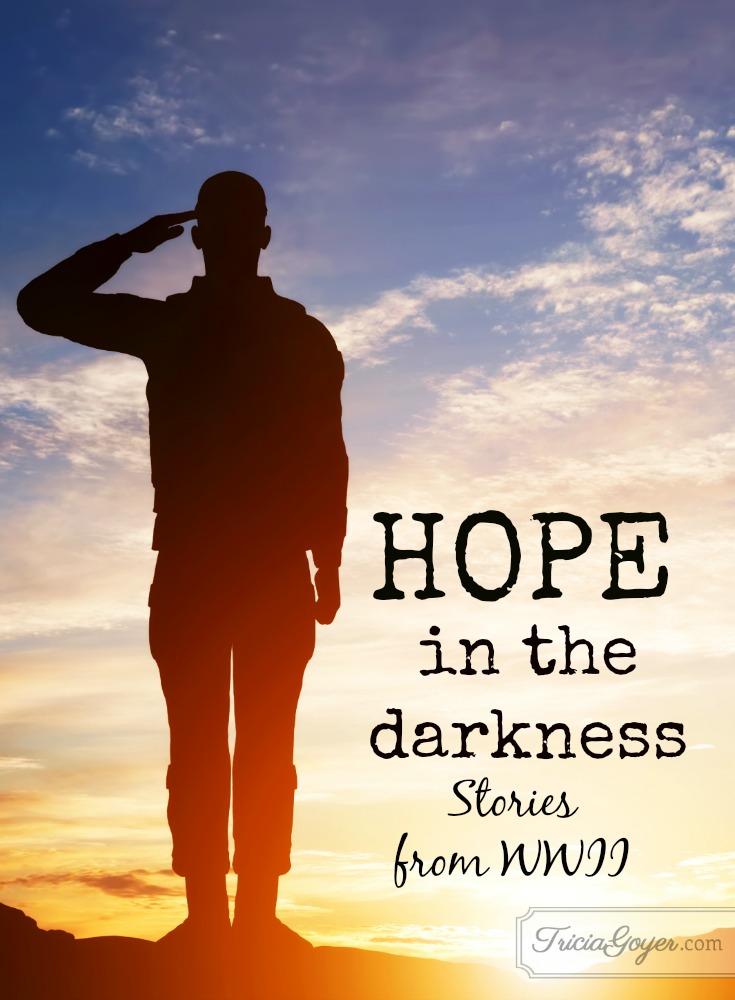 How to Find Hope in the Darkness

With every one of the 12 hours it took me to get to Kalamazoo, Michigan, my doubts grew. I was a young mom of three, an aspiring romance novelist who’d yet to commit more than a few chapters of a book to paper—let alone get a publisher interested. What business did I have attending a reunion of World War II vets, interviewing them about one of the most troubling times in human history? Now here I was, at the hotel, wondering if my trip was a big mistake. These veterans might not warm up to you right away, I warned myself, walking into the lobby.

A man saw me and rushed over. “Are you the author?” he asked.

“I’m Bob. My father was in the 11th. The men knew you were coming today. They’re all waiting for you.” I nodded, eager to meet the vets, especially those from the 41st Cavalry Recon Squadron, who were part of the 11th Armored Division and the first ones inside the Mauthausen concentration camp.

I followed Bob into the conference room, wheeling my suitcase. Reunion of the 11th Armored Division, Patton’s 3rd U.S. Army a banner declared. Eight of the veterans were sitting in a row, some wearing caps with army insignias, others with photo albums resting on their laps. That was a good sign, wasn’t it, that they would tell me their stories? Unless they were too difficult to share…

How to Find Hope in the Darkness

I had reason to doubt. My grandfather was a World War II veteran. He could regale me for hours about growing up in Kansas with 11 brothers and sisters, but when I asked him about the war, he’d backtrack to stories of his youth or skip ahead to later in life. Grandma took me aside and, in a hushed tone, told me he had been wounded and sent home on a hospital ship. I wanted desperately to know more, but I didn’t want to upset him. Maybe it was better to let the past be the past.

Six months after Grandpa died I traveled to Europe with two friends of mine—also writers—who were researching World War II sites for their books. Our last stop was the Mauthausen concentration camp, in a tiny Austrian town. From outside, it looked like a castle, a stone fortress. But inside, it was clear it was built for one thing: death. Our guide told us about the 11th Armored Division that liberated the camp after a grueling battle through France and Germany. It wasn’t Grandpa’s unit, but hearing about the horrors the men witnessed helped me understand his stoic silence.

Back home in the States, I tried to work on the next chapter of the romance novel I’d been writing, but the 11th Armored and what they had seen at Mauthausen wouldn’t leave my head.

Lord, I asked, are you trying to tell me this is the story I need to work on?

I called my literary agent and pitched her a novel based on the liberation of Mauthausen. “This doesn’t sound like you. Where’d this come from?” my agent asked. I told her about my trip. She agreed my pitch had potential. “Can you get in touch with any of those men to find out more details, Tricia?” she asked.

Could I? I’d never done anything like that before. Then again, I’d never written a novel before either. I went on the internet, found the 11th Armored Division Association and e-mailed the group’s secretary. Within minutes, he replied with 10 names and addresses. I wrote letters to each veteran, asking to meet them. I got six responses back, all saying the same thing: “Why don’t you come to our reunion?”

Now here I was, ready or not.

I set my suitcase against the conference room wall and pulled out my tape recorder and notepad. A tall, thin man with white, white hair and a short, stocky man with gray-black hair motioned me over.

“I’m Arthur,” the taller man said. “And this here is Charlie. We were wondering if you could interview us at the same time.”

Arthur and Charlie were best friends. One began a sentence and the other would finish it. They told me the pranks they pulled on each other, the time they’d gone east to pick up rations and gas and unexpectedly ran into the Russian Army.

“This is a great bunch of guys. I wasn’t in the original division, but when I came in, they took me under their wing,” Charlie said.

“Yeah, but if I knew what type of guy you were, I would have beat you up right then,” Arthur teased, a sly grin on his face and a twinkle in his eye.

They were having such a good time, I almost didn’t want to ask the serious questions. But I needed to.

“Tell me about Mauthausen,” I said.

They both turned somber. “I’ll never forget it as long as I live,” Arthur said. They described the decaying and burned bodies, the prisoners so emaciated they were like walking skeletons. “You should speak to Pete,” Charlie said, pointing to the short man sitting at the end of the row. “He was a medic, among the first in.”

LeRoy “Pete” Petersohn was the exact opposite of Arthur and Charlie, quiet and reserved. “I don’t know that you can learn all that much from me,” he said when I sat down next to him.

In a soft, gravelly voice, Pete told me, “I had gone through so many things, patching up soldiers who’d been shot, hit by shrapnel. I thought I was pretty hardened. Then I got to Mauthausen.”

He said that against the stone walls, the Germans left the bodies of executed prisoners to rot. Some of the survivors dropped to the ground and died before his eyes. “I see piles of eyeglasses,” he said, voice trembling, the memory so vivid it was as if he were back at Mauthausen. “The furnace of the crematorium is still red hot.” Tears filled his eyes. Pete began to cry. 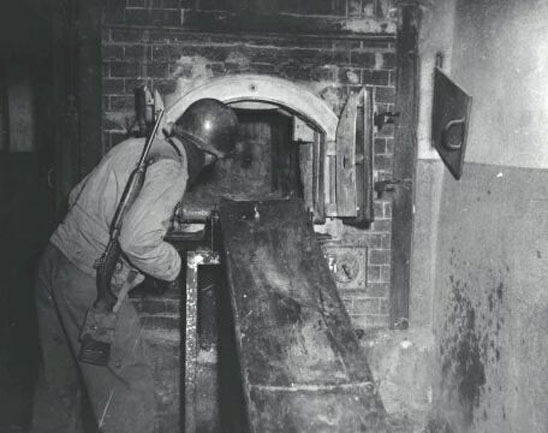 The other veterans nodded in sympathy. I couldn’t say a word. This was what I was afraid of. Lord, did I push too far? Finally, I reached out and took Pete’s hand.

He took a deep breath and then continued. “My commanding officer told me that anyone who appeared beyond help should be let go so that we could focus on treating the rest. But there was this one woman, rail thin, holding a baby who couldn’t have been more than a few weeks old. The baby was covered in boils—one of those cases that seemed to be beyond our help. But I couldn’t just let the baby die.”

With his C.O.’s permission, Pete spent half a day lancing off the boils and cleaning the child’s wounds. He administered antibiotics, scrounged around for some milk and food he could give her. “Then I went on to the next person,” Pete said, wiping his eyes.

“Did the baby survive?” I asked.

As painful as Pete’s experience had been, he was amazed by the resiliency of the camp survivors. “A group of them got together and took out musical instruments. Before the war, they had been famous composers, violinists, cellists. The Nazis had forced them to perform for their entertainment. Now they played ‘The Star-Spangled Banner’ for us.”

I spent four days with the veterans listening to their stories. Then I went home and started writing. I combined the soldiers’ recollections with a story I’d heard from the tour guide at Mauthausen, about the wife of an SS officer who aided the Americans and the survivors after liberation. My agent sent the first three chapters to publishers, and within weeks I got a call that a Christian publisher in Chicago was interested. As soon as I finished the manuscript, I sent it to the men of the 11th. “When they make a movie out of this,” Arthur said, “just make sure you have someone really handsome play me.” 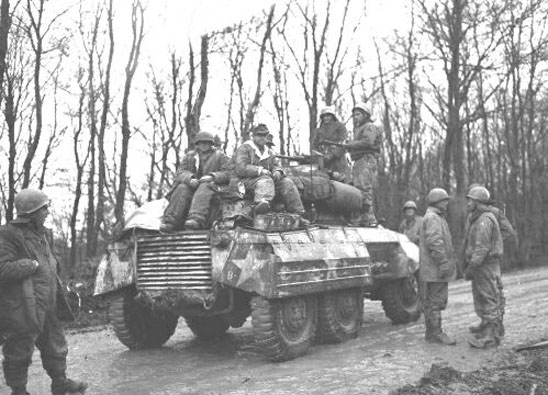 Pete’s story about the prisoners’ orchestra inspired me to write another historical novel. I had my publisher put a note on their website, asking for information from other medics who’d been at Mauthausen.

A few days later, I got an e-mail. It wasn’t from a veteran. It was from a woman named Hana. “I’m looking for someone who helped me when I was sick during the war,” she wrote. “Do you know any medics from the 11th Armored Division?”

I knew one. I sent her Pete’s information. Maybe he could put her in touch with the medic who had helped her.

Less than a week later my phone rang. “Hello?” I answered. Not hearing any response, I almost hung up.

Pete told me that Hana had called him. “Were you able to put her in touch with any other medics?” I asked.

“Tricia, you don’t understand,” he said. “Hana … she was born at Mauthausen. Three weeks before liberation. Her mother told her about an American soldier, a medic who helped her when no one else would. She was the very same baby I told you about.”

Hana and Pete’s reunion overwhelmed me. I wondered what Grandpa would have thought about the unlikely role I had played in it all. I’d learned from him how painful these stories could be. But thanks to his fellow veterans, I discovered how necessary they were to tell. Even in our memories of the darkest times, sometimes we can find hope and good and light.

Even in our memories of the darkest times, we can find hope & good. @TriciaGoyer