You are here: Home / faith / How to Stop Comparing and Walk in Freedom

The older I get the more I realize how important it is to know how to stop comparing and walk in freedom. Life is short and God has called us to so many things. This guest post from Shannon Popkin will help you focus on the freedom we can gain in Me-free living. 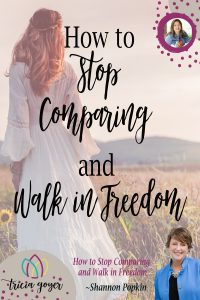 I came running home after school, crying so hard I could barely talk. My mom dropped everything, and through my hiccupping sniffles, I told her my third-grade woes.

It had been a standardized testing day. As the teacher passed out tests, she had given all the smart kids a red test booklet, but I got a blue one—just like the rest of the class.

For a while now I had been worried that my placement in our school’s gifted program was a fluke. I was pretty sure I wasn’t as smart as the others, but since I loved the program so much, I kept my suspicions to myself.

Today, however, the truth had come out.

The teacher knew. The whole class knew. And I knew. I wasn’t one of the smart kids, and I had a blue booklet to prove it. Oh, the humiliation! I wanted to shrivel up, hide, and never go back. I just knew that all the kids were whispering to each other and telling their moms, “Shannon got a blue booklet!”

Looking back, my third-grade angst seems rather pitiful and absurd. Why was I so worried about being exposed as average in a room filled with other kids with blue booklets? Why was I shrinking in shame, convinced that all eyes were on me? But then, I could ask similar questions about the angst I feel today. Why do I worry about being exposed as a less-than-perfect mom? Or a middle-aged woman who struggles with her weight? Or a writer who’s less than perfect?

Since childhood, my heart has been aching to know one thing: How do I measure up?

Do you struggle with this as well? On social media, in your neighborhood, at church or even at a stop light, do you glance sideways and compare?

When Jesus came, walking in sandals on dusty roads of Galilee, he encountered people who struggled with the same measure-up comparison we do. There were puffed up Pharisees, disciples elbowing past each other, and tax-collectors who could barely lift their heads. Everybody wanted to be first and despised being last. Yet Jesus doesn’t respond like I expect, saying, “Y’all need to stop comparing!” Instead Jesus told comparison stories—like the one about the good Samaritan or the wise and foolish builder. And he compared people in real life, like when he told Martha that Mary had chosen what was better, or when he said the widow who donated two coins had given the most. Jesus used comparison words and stories constantly, but always with a twist.

Jesus’s way of comparing was upside-down from how things stack up in the world. 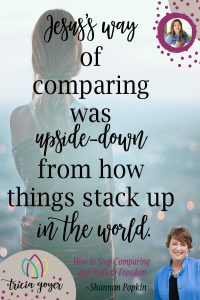 So as Jesus encountered people who were steeped in me-focused comparison, he kept inviting them to come be part of the kingdom of the me-free. Whether they were filled with angst because they didn’t measure up, or pride because they did, Jesus just kept opening wide the gate to the kingdom and saying, “Come follow me.” Still today, Jesus invites us to detangle ourselves from the comparison stress of the world and live as he did—emptying ourselves of status, pouring our lives out, and laying our lives down.

In his letter to the Philippians, Paul extended the invitation of Jesus to a new group of people—inviting them to the same me-free living that Jesus had modeled. He wrote,

“Do nothing from rivalry or conceit, but in humility count others more significant than yourselves. Let each of you look not only to his own interests, but also to the interests of others. Have this mind among yourselves, which is yours in Christ Jesus, who though he was in the form of God did not count equality with God a thing to be grasped, but made himself nothing, taking the form of a servant” (Philippians 2:3-7 ESV).

When I enter a room full of people with the measure-up mindset of the world, I constantly glance sideways, worried about how I measure up. I posture or project a certain image. I shrink back or avoid vulnerability. No matter which way I turn, I’m obsessing with me-focused comparing which is thoroughly exhausting. But when I have me-free mindset of Jesus, I step into that same room free of worry, pride, and stress. I’m able to simply focus on the other people in the room; to really see them and open my life to them. I’m free to wonder if perhaps God placed me there with a purpose.

Perhaps I have something I’m supposed to give!

Friends, what if it doesn’t matter whether we have a red or blue test booklet? What if it doesn’t matter how big our house is or what size jeans we wear? What if the woman with the perfect-looking kids is missing the point by trying to outdo everyone, and the one with the failing marriage is nailing it with her extravagant humility? And what if the thing that does matter is using what we’re given—our smarts, our bank account, or our physical self—to lean down and lift others up?

This me-free living which Jesus invites us to is what restores our freedom, confidence, and joy. 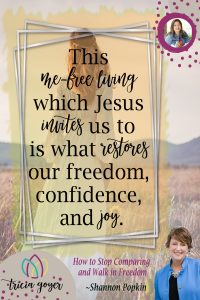 Do you compare yourself?

On social media, in the neighborhood, at church, or the school drop-off lane, do you push yourself to prove that you measure up, then feel ashamed when you don’t? Measuring yourself against others isn’t healthy. And it isn’t God’s plan. In fact, the way of Jesus is completely upside down from this measure-up world. He invites us to follow him and be restored to freedom, confidence, and joy.

Join me as—with humor and straightforward honesty—I share what I’ve discovered about my own measure-up fears and get-ahead pride in this six-week study. Together, we’ll explore the conversations Jesus had and stories he shared with people who—like us—were comparing themselves.

Let’s leave measure-up comparison behind and connect with those around us by choosing Jesus’s me-free way of living: lifting others up and pouring ourselves out 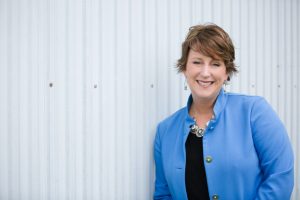 Shannon Popkin is a wife and mom, a writer and speaker, a small group leader, and Bible teacher.

She shares her life with Ken, who–after 23 years–still makes her laugh every day. Together, they live the fast-paced life of parenting two college-aged kids and a teen.

As a mom, she loves cheering her kids on from the sidelines and taking pictures of them (can you hear them groaning?). They love to open their West Michigan front door to family and friends and are deeply invested in their local church. She’s delighted with every opportunity to invite women to live like God’s word is true.

Connect with Shannon at https://www.shannonpopkin.com/