You are here: Home / articles and blogs / I See You! | Guest Post From Tammy Maltby

Did you ever see the television show Undercover Boss, which premiered in early 2010? It’s a reality show that follows the heads of companies who go “undercover” in their own companies. The CEOs or other high-ranking executives disguise themselves and join the ranks of ordinary employees—scrubbing toilets, assembling burgers, loading trucks, cleaning motel rooms, and getting to know their fellow workers. Usually they struggle to keep up with the work, and they gain new appreciation for what these jobs entail. They also come to appreciate the hardworking, creative, enthusiastic employees who struggle to do a good job while coping with money woes, medical problems, and other personal issues.

At the end of all the shows, the undercover bosses reveal their true identities and express verbal appreciation along with more tangible rewards—bonuses, vacations, promotions. Tears flow at these “reveals.” But it’s not the tangible rewards that touch the employees most deeply. What matters most to them is realizing their efforts have been noticed.

There’s power in those tearful moments because they touch us where we all live. We work so hard and pour out our lives and mean so well, and too often we feel that nobody notices what we do. Perhaps nobody even cares.

Matthew 6:4 says it clearly: “Then your Father, who sees what is done in secret, will reward you.”

Since God sees what is secret, that means He’s well aware of what nobody else even notices. He sees your faithfulness and your obedience, even in the face of doubts. He sees the choices you make to follow Him and persevere in doing right. He sees you trying again, even when you’re weary. And because God looks at the heart, I believe He sees and honors your attitudes and your good intentions, even when you don’t quite succeed. He honors your attempts to act on what you hear Him saying, even when you get the message wrong. He even honors your honest doubt and your feeble attempts to move toward Him despite those doubts.

In fact, just as Jesus once held out His hand to a sinking Peter, God responds to your smallest attempt to reach Him. He sees what you’re trying to do and reaches down His hand to help you up.

I truly hope that you receive approval and appreciation for what you try to accomplish here on earth. I hope you enjoy the satisfaction of knowing your efforts are successful and appreciated. But even when you feel like nobody sees you, keep reminding yourself that God does. In fact, He’s your best and most appreciative audience.

When you take a step of obedience and faithfulness, He’s applauding all the way.

Adapted from The God Who Sees You by Tammy Maltby (with Anne Christian Buchanan). Copyright 2012 David C. Cook. Used with permission. Permission required to reproduce. All rights reserved.
### 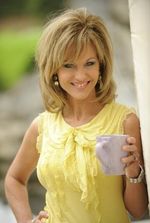 Tammy Maltby is a speaker, author and media personality with a heart for helping women to live rich, authentic lives. Her multifaceted life can be summed up in one word “encouragement”. Though the gift of hospitality she mentors women in embracing community and connection though faith and food. She empowers woman to start simply but simply start!
A ten-year cohost of the two time Emmy-winning NRB TV talk show of the year Aspiring Women, Tammy has also been featured on hundreds of radio and television programs, including Focus on the Family, Family Life Today, Life Today with James and Betty Robinson, The 700 Club, Midday Connection and CBN’s Living the Life. She was the ongoing emcee for the John Maxwell’s international THRIVE! events. She is the mother of four grown children, two of whom are internationally adopted. Tammy makes her home in Colorado with her husband.