You are here: Home / faith / In the World, Not of It: Protecting Innocence 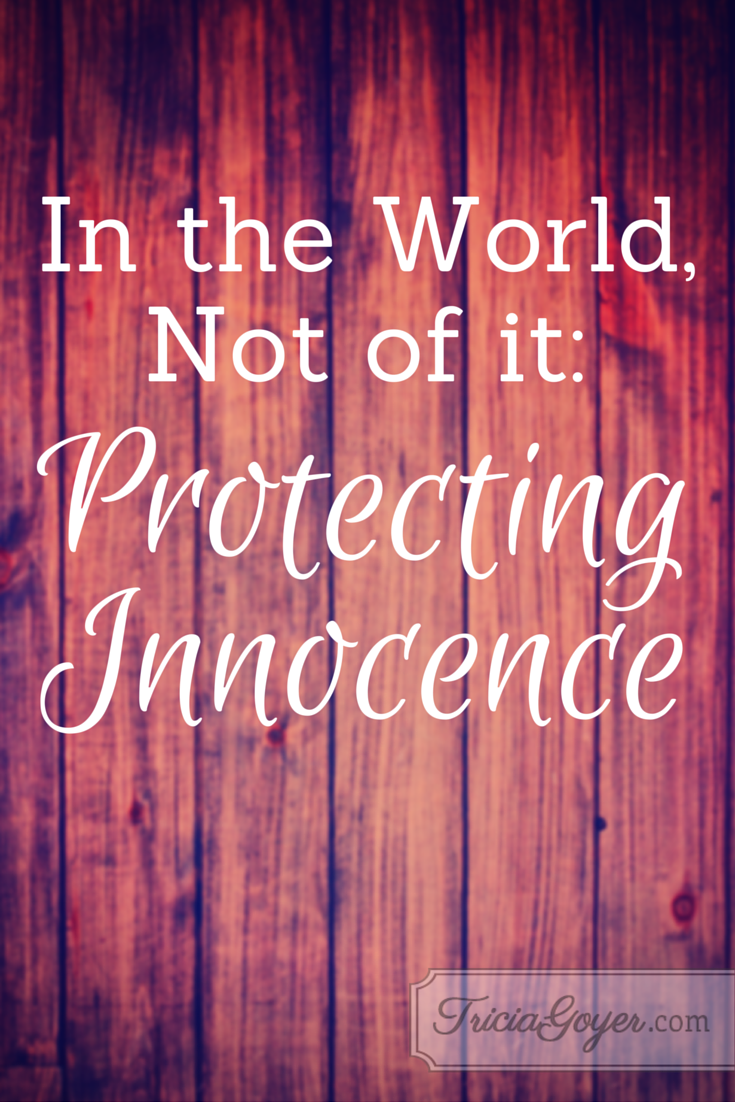 In the World, Not of It: Protecting Innocence

“I will refuse to look at anything vile and vulgar. I hate all who deal crookedly; I will have nothing to do with them.” Psalm 101:3 (NLT)

I can remember the first horror film I watched was when I was in third or fourth grade. The plot line was about a man who moved into a haunted house and then uncovers all the horror that happened there. I’m scarred for life, seriously. Who let me watch that? (Sorry, Mom and Dad, but it’s true.) I thought about that movie many times over the years. It didn’t leave me. That movie (and others that followed) brought fears and dark thoughts.

I’m sure at the time I begged to watch it and other movies I also still remember—those with sex and violence and foul language. When I was a kid, MTV and HBO had just shown up on the scene. Television was no longer a “safe” place . . . and I was drawn to all the smut. What kid isn’t? I wanted to feel grown-up. I liked being scared and having my heart race at both romance and danger.

The thing is, as a kid, I didn’t know what to do with buds of the sinful desires that were also stirred up.

Sure, I’d watch Fraggle Rock during the day, but at night when my friends were staying over, we’d turn the TV down and watch movies I’m too embarrassed to name. Then there were the popular songs at the time. How many times could one sing “Like a Virgin” by Madonna without the words making an impact? (I’m sure glad that I didn’t grow up with the Internet; kids today have many more temptations!)

So where did that leave me? At thirteen when I got my first boyfriend, my innocence was already gone—or at least that’s what it felt like. So when I started dating a handsome, older boyfriend, getting caught up in the emotion was easy. After all that’s what those people on those movies did.

I don’t think I consciously made an effort to surrender my innocence.

It was never that simple. By the time my boyfriend gave me my first kiss my innocence had been stripped away one movie, one lusty song at a time. I didn’t have a sense of “Should I do this?” Instead, I thought “Finally.” After all those years of watching “romance,” I finally was experiencing a bit of it myself.

As a mom, I went to the extreme with protecting my kids, or so some people thought. My children couldn’t listen to secular music, and I monitored all their television. They couldn’t watch Jurassic Park until they were in junior high and Wizard of Oz was pretty much off limits until then.

I even homeschooled my kids so I could be the gatekeeper of what entered their lives. I’m thankful I did. My intention at the time may have been to protect my kids’ innocence, but the close relationships built during those years—and mostly their relationships with God—are our reward.

Turn to God for strength and wisdom in leading your kids toward all things pure. @TriciaGoyer

We need to step out of our Christian circles and impact the world. I believe that.

There’s a difference between my daughter accidentally overhearing a conversation between two pregnant teens than me allowing a movie with sexually promiscuity into our home. If you’ve reached out to and are walking with others, in a dirty world you’re going to get messy at times. Though we should model grace and compassion for our kids, we should never risk their innocence for the sake of entertainment.

Did protecting my kids’ innocence work? No and yes.

In their growing-up years they still watched things they shouldn’t (when I didn’t know) and one of my children as a teen found a way to get around some of the safety protections we set up on the Internet and was drawn into places this teen should never have been. So I wasn’t able to protect my kids completely. But in many ways they were allowed to stay kids longer. Their minds weren’t filled with the smut, and it gave more room for God’s word and a relationship with Jesus to grow.

“And now, dear brothers and sisters, one final thing. Fix your thoughts on what is true, and honorable, and right, and pure, and lovely, and admirable. Think about things that are excellent and worthy of praise.” Philippians 4:8 (NLT)

Protecting your child’s innocence may call you to higher standards for yourself.

You might even need to make sacrifices of money and time (especially if God calls you to homeschooling, too). But know that your effort will pay off. We only have a short season when we’re able to protect our children. Don’t let the world’s standards influence you. Instead turn to God for strength and wisdom for guidance in leading your kids toward all things pure.

Lord, fix my thoughts on truth, honor, and purity. Give me heavenly standards. Show me ways I protect the innocence around me in my day.