You are here: Home / Uncategorized / Lethal Deception by Lynette Eason 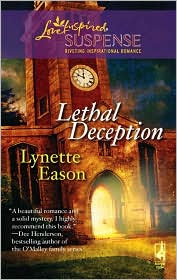 A peak into Lynette’s Lethal Deception:

WHO WANTED HER DEAD? Having rescued Cassidy McKnight from kidnappers in South America, Gabe Sinclair thought his job was done. Not that the formerNAVY SEAL could ever forget the brave, beautiful single mother. But when the danger followed her home, Gabe promised to protect her. Why anyone would want to kill Cassidy was a mystery. Was the motive related to the orphaned toddler Cassidy was raising, a sweet little girl who brought out the father figure in maverick Gabe? Or did a newly revealed family secret have killer consequences?

You can find out more about Lynette here

Tell us a little about your family and your call to write.

My family is awesome. My husband is a professional musician/professional fundraiser for Christian radio stations. We have two children who keep me busy and constantly on the go with all of our activities and homeschooling.

As for the call to write, I have always loved the printed word. I aced High School and College English but never felt the need to actually write a book until my daughter was almost 6 months old. That’s when I started. I’ve always WANTED to write one, but never felt the NEED to write one until that point in my life. So, I got on the computer and just started writing. Eight years later, God is allowing my dream to become reality. It’s a very surreal and awesome thing.

How do you balance family life with writing?

Well, I don’t know that I’m always successful at it. I homeschool so needless to say, I get plenty of time with my children, so when they are busy after lunch, I don’t feel the least bit guilty getting on the computer and writing at that point. Of course, everyday doesn’t always go smooth, but I do the best I can. I also write a lot at night when everyone is in the bed.

Could you briefly take us through your process of writing a novel—from conception to revision? Oh boy. This is kind of a hard question for me. I’ll get a little smidge of an idea from something and then I’ll have to place my character in the midst of that idea and see what happens. But before I can really develop the story, I HAVE to do a character sketch. I use Randy Ingermanson’s layout. It’s the only one I’ve found that works for me and lets me get to know my characters. Once I’ve got the characters down, I move on to the synopsis. At this point, it’s not really a synopsis, it’s a brainstorm page…or 10. Once I have all that down, I can start writing Chapter 1. Usually the synopsis/story changes as I write it, but at least the synopsis helps keep me on track, and I know I have to get to the next scene. Before I was published, I would edit the synopsis as I wrote because I knew when I submitted the manuscript, I’d have to submit a synopsis, too. So, using this method, when the manuscript was finished I had a “matching” synopsis to go along with it to submit. As far as revision, I find that I really write a pretty clean first draft. And that’s simply because I catch a lot of mistakes as I go. I’m not one to waste time on constant editing. I write, editing as I go to some extent. When I finish the manuscript, I print it off and read it out loud to myself…and anyone who is unfortunate enough to be within earshot. At this point, I generally send a copy to my critique partner. As I read it aloud, I find mistakes, holes in the plot, things I need to address, etc. I make note of those on the printed version, then change them on the computer, print it out again, read through it again, see if I missed anything, fix it if I did, then send the thing off to my editor.

Would you discuss Lethal Deception? Where did you get the idea for the story?

That was a fun story to write, edit, revise, etc. Honestly, though, by the time the AA’s arrived, I was sick of it. I understand now why some authors actually shudder when you ask if they’ve read the story in final book form. Maybe one day. Anyway, I was sitting in the DMV (Dept. of Motor Vehicles) thinking what a jungle the place was when all of a sudden I just had characters popping into my brain, a story gelling, and voila…by the time they called my number, I had written the first chapter. I did a lot of research on the Amazon Jungle, read some fictional accounts with characters in the jungle, read nonfiction, etc. and just came up with the story. It’s just really hard to explain where my ideas come from. I guess I have to give God credit for that.

Tell us how much of yourself you write into your characters.

I try not to put a whole lot of myself into my characters because I’m afraid it might make them come across lacking in individual personalities. Occasionally, I’ll put something in there that is me, but for the most part, my characters come totally from my imagination. In fact I have a series I’m working on that if it gets published, a lot of people who know me are going to wonder how much of it is autobiographical and I’m here to say…none!

Tell us a little about your journey to publication.

I told you a little about writing that first book. After many rejections on what I thought was the best book ever written, I ended up writing four complete novels, joined writers groups such as RWA, ACFW, and FHL, and attended several writing conferences. I kept sending out stuff and kept getting rejected. Fed up, I self-published a book in January of 2005 called Gift of Grace. That was fun, but it wasn’t my goal. Then I realized that in order to get published, I needed to write something geared for a specific line, follow the guidelines, and pray a lot. My prayer was for my writing to be a ministry where when someone reads my book, they see Jesus in the pages. In order for that to happen, I needed a Christian publishing house. Steeple Hill fit exactly what I wanted. I got rejected a couple of times for various reasons, then finally got the right story at the right time with the right editor.

What advice would you give to others who are trying to get their first book published?

First of all, if it’s the first book you’ve ever written, it’s probably not the one that’s going to sell for you. I mistakenly thought I was a great writer after I finished my first attempt at Christian fiction. Turns out I had a lot to learn. Still do. Pray a lot. :-)Seriously, don’t give up. Learn from the rejections and keep sending your stuff out there. While one project is in the mail, work on the next. Keep writing, and polishing. Join different groups that have writers that write the kind of material you write and ask questions. I can’t think of a single Christian author out there that wouldn’t love to tell you about their work. Read blogs on writing. Terry Whalin’s blog is great. Brandilyn Collins has wonderful archives devoted to the craft of writing fiction. Those are just two examples because my response is getting really long, but there are some WONDERFUL authors who post writing helps and advice all the time. Search for them and learn from them. And go to writer’s conferences. Yes, they’re expensive, but you have a year to save, or even two years. And while I know it sounds like a long time, it’s also during that time that you’re preparing for that big meeting with an editor or agent. And it goes FAST, I promise. Just don’t go unprepared. That’s just NOT pretty. And it can hurt your career, too, no matter how great a writer you are.

What do you write and why this genre?

I write Inspirational Romantic Suspense for Harlequin’s Love Inspired Suspense Line. I write it because I love to read it. I’ve always gone for the mystery, the edge of your seat stories. So, I decided to try my hand at writing one and it’s finally paying off.

Thank you so much for allowing me to be here! I love to share about writing, and encouraging others in their journey. I also love the opportunity to give the credit to God. He’s such an awesome Heavenly Father and I just pray we can keep our eyes on Him and realize that without Him, we would have no reason to write. Again, thank you!