You are here: Home / family / Lovin’ the elderly!

My sweet Grandma has lived with our family for eight years. 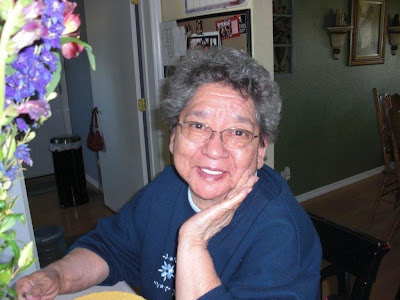 While there are challenges we love having her here. I was so thankful to meet Missy Buchanan on Twitter and hear about her heart for the elderly. I interviewed Missy to discover the passion behind her ministry and books.


Tricia: Tell me how you started writing for older adults.

Missy: I began writing for older adults out of a personal experience with my own aging parents (now deceased).  I realized that I had become so focused on their physical needs (doctor visits, filling prescriptions, etc.) that I had neglected their spiritual needs. They were people of great faith who had been very involved in their church, but as their physical decline continued, they were no longer able to participate in the life of the church as they once had. I almost missed the fact that they needed daily encouragement and spiritual nourishment. It is a mistake that many adult children and churches make… thinking that aging parents can somehow rest on their spiritual laurels.

Tricia: How did you deal with that realization?

Missy: For me the saddest moment came when I realized that I had neglected my parents’ spiritual wellness while focusing on their physical issues. That was an eye-opening experience! I remember my mother saying to me that it had been six months since she had been served communion. Communion was an important part of my mother’s faith life. At that moment, I realized the disconnect my parents felt from their church. Sadly, their church had neglected them at a time they needed it most.

Tricia: What joy have you found in this ministry?

Missy: Aside from the joy of hearing from so many older adults who are finding comfort and hope in the pages of my books, the happiest moment for me came when I received a phone call from Lucimarian Roberts, mother of Good Morning America’s co-host Robin Roberts. The elder Mrs. Roberts gave me the greatest compliment I could ever receive when she said, “How did you read my mind? How did you know what I have been thinking?” We developed a warm friendship which led to my appearance on Good Morning America.

Tricia: Was the most difficult decision you have ever had to make when dealing with your aging parents?

Missy: I suppose the most difficult decision I ever had to make was when my 92 year-old mother fell and shattered her femur into hundreds of pieces. She had already been in much pain due to severe arthritis in her hips.

My brother, sister and I had to make the decision of whether or not we would have her undergo surgery. We were told that almost assuredly, her leg would have to be amputated and that she would then have a very long rehab. We decided against the surgery and to keep her as pain-free as possible during her last few weeks of life, knowing that it was the decision she would have made herself. Even though we were all in agreement and confident in our decision, it was still difficult.

Tricia: How did you experience God during when making this decision?

Missy: My brother and sister and I share a deep faith. Through prayer, we were able to make our decision with confidence. God worked in our lives to bring us a sense of peace.

Tricia: What hope or encouragement do you have for others who may be facing the same situation of caring for aging parents?

Missy: Many adult children are facing tough decisions about their aging parents, especially if those loved ones are in physical or mental decline. It is important to remember that aging is part of God’s plan. Having prayerful conversation about tough end-of-life issues is helpful to the wellbeing of the older adult AND the adult children.

Buchanan is the author of Talking with God in Old Age and Living with Purpose in a Worn-Out Body: Spiritual Encouragement for Older Adults (Upper Room Books).  Don’t Write My Obituary Just Yet was released in March 2011, and Aging Faithfully: 28 Days of Prayer was released in May 2011.  She writes a monthly column, “Aging Well,” for the United Methodist Reporter and she hosts Aging and Faith with Missy Buchanan on BlogTalk Radio.  She has also written for many publications including Mature Years, Mature Living, Presbyterians Today, Christian Association Serving Adults Ministries, Entrepreneur, The Dallas Morning News, and Good Morning America’s spirituality page.  In December 2010, she appeared on Good Morning America with Robin Roberts and Roberts’ 86-year-old mother in a segment about aging and faith.  (Visit www.missybuchanan.com for a link to the interview.)


A sought-after speaker on topics of older adult ministry and spiritual creativity, Buchanan brings passion and humor to many events for churches, organizations, and women’s groups.  She recently toured the East Coast, speaking to a variety of churches and senior resident centers.


A native Texan and former creativity educator, Buchanan loves spending time with her family, including her husband, Barry, their three grown children/spouses, and her two grandchildren.  Buchanan and her husband reside in Rockwall, TX.