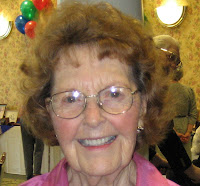 (if she’s not just the cutest thing…)

… Two policemen wearing full dress uniforms roared up, one on either side of me. They motioned and piloted me off to the side of the road. My foot was shaking so much on the pedal that the jeep was jumping like a green rabbit in tall grass. What in the world had I done wrong?

Turning off the engine, I leaned my quivering head out of the homemade window. The tallest officer stood by my jeep and asked, “How did you get onto this road, Madam?” His voice was stern and brisk.

“W—why, I just turned onto it way back there.”

“Please show us your passport.”

“I always carry my passport.” I dug it out of my purse.

They both looked at it, compared the uncomplimentary picture of me with the real me.

The officer’s eyes narrowed. “What is your business here in Bombay?”

“Yes, but I always come to Bombay to shop for Christmas presents. I am also visiting some friends who live on this road.”

“What friends? Who are they?”I told them.

In great surprise, each drew in a deep breath. Face softening somewhat, the examiner asked, “Weren’t you informed you should not be on this road today?”

“No, I was not. What’s the matter, officers? Why am I being stopped?”

“You are being stopped because no one should be on this road. Our police force has sealed off every lane and alley leading to Marine Drive.”

“I guess they missed the alley I was in. Why is the road shut down?”

“We are having a parade of honor today, and this road was sealed off for protection.”

“For whose protection? Who are you honoring?”

He drew himself up as tall as his five-feet-four would allow. “King Saud of Saudi Arabia.” His voice was as chilling as my goose bumps.

I gasped and felt my eyes rolling back in my head. “K—King Sa—?”

“Yes, Madam. And you are holding up his entire parade.”

“I will stand guard with you, and my companion will go back to escort the King’s parade. We cannot hold off any longer.” He motioned to his buddy, who screeched his motorcycle around, and with siren wailing, zoomed back to his convoy.

I gulped air and my stomach bobbled silently while I tried to keep from giggling. My mind flashed a mental picture of the King of Saudi Arabia drumming his ringed fingers on his limousine’s arm rest, and cracking his knuckles in impatience. Some stupid idiot was holding up his parade.

Of course the forlorn truth about that mental picture was, the king’s royal knuckles were cracking because of me. I was the stupid idiot delaying the honors due him. I glanced across the road and saw many people now strung out in front of their apartments, and lining doorways, waiting to see the King.

My face had a hard time keeping itself straight.

As thundering drums approached, I stood respectfully beside the officer and my dusty jeep, watching the long procession of flags, drums, horns, motorcycles, black cars, the King and his kin, army officers and police.

I waved merrily to King Saud as he passed by. I was closer to him than anyone else, but he didn’t wave back.

After the great retinue disappeared down the road, I climbed back into my jeep. “May I go now?”

The police officer guarding me moved his head from side to side which means “Yes” in India.

“I will have to report the reason for the delay to my superior officer, Madam. You may be questioned.”

“Please report it to the TOP superior officer,” I suggested.

The top superior officer and his wife were the friends I was staying with. He was the supreme captain of the whole Bombay police force, numbering 85,000 men at that time. With so much responsibility, no wonder he forgot to warn me at breakfast that morning. He had been riding in one of the lead cars in the parade—sitting ramrod stiff, looking straight ahead. I could imagine his shock seeing me with peripheral vision, in custody of one of his officers. The crazy person holding up the entire king’s parade—was his own houseguest?

Maybe that would help him remember he hadn’t warned me about the parade.

I bet his knuckles hurt.

And…don’t forget to stop by today’s stops on the A Valley of Betrayal blog tour!