You are here: Home / marriage / Married. Now What? 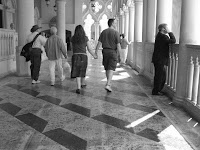 I remember doodling designs for my wedding dress on the brown-paper cover of my English book. Funny thing, though, somehow (I realize now) I forgot to daydream about what happened after I married my Prince Charming. I forgot a marriage followed. Maybe it wasn’t just me. Thinking back over my growing up years during the 70s and 80s, I remember Billy Idol’s “wedding song” and, oh, about 2,573 songs about love. (Addicted to Love/Robert Palmer, Crazy Little Thing Called Love/Queen, Groovy Kind of Love/Phil Collins . . . to name a few.) But I can’t think of one “romantic” song that talked about the day-in-and-day-out of marriage. Or commitment. Or forever “I do.”

Not too many years later, when high school rolled around, I didn’t think about “forever commitments” as I became sexually active as a teen. Or as I dumped “loser” boyfriends for better models. Or as I broke many hearts and found mine broken. In fact, I didn’t think much about marriage until after I was married in 1989, at age eighteen. I’d signed up for the “I do” after finding someone “safe.” Someone who loved me and my son. Someone who had a relationship with the God I was just starting to know.

I fell in love with my new beau, and John was great. I had a grand time planning the wedding . . . and then I woke up one day with this guy sleeping beside me with questions of, “What now?”

As someone raised by a mom and step-dad (who were contemplating divorce on my wedding day), I couldn’t think ahead to what the next year held for John and me, let alone the next fifty years. As a young bride, I wanted the best marriage possible, but I had no idea how to make that happen. And that, my friend, is an anxiety-filled, confusing place to live!
What about you? Did you have one of those What Now? Moments after you married?