You are here: Home / writing / My Review of the Movie Redeeming Love
Today I’m sharing my review of the movie Redeeming Love. Like many others, I’ve been anxiously awaiting the transition from book to movie. With such an important message it’s no wonder the movie is drawing lots of commentary. Let’s talk about the movie and how it might be a great retelling of a timely message from God to His people. 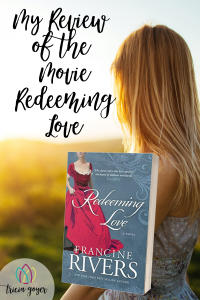 My Review of the Movie Redeeming Love

I saw Redeeming Love last night. I’ve previously read the novel by Francine Rivers. And, reading through the Bible 7-8 times, I’ve read the book Hosea numerous times, too.
For those who aren’t familiar with the biblical narrative, Hosea is a prophet of God who is asked to physically portray a message of repentance to a woman named Gomer. The name Hosea means “salvation,” and his life was a prophecy to the nation of Israel. Hosea’s wife was a prostitute who continued to return to her sin. Yet even then, Hosea would go to her and “redeem” her, repurchasing her from the darkness she had surrendered herself to.

Hosea’s life was a prophecy to the people of Israel, a statement that although God will bring judgment to sin, He will also always bring His people back to Himself through His love. The cycle of repentance, redemption, and restoration is evident in this story.

In 1991, my friend Francine Rivers published a book that follows this storyline. Although I started it many times, I only finished it last year because it’s a brutal story. In it, Angel is sold into prostitution as a child, and as an adult, she’s tried to escape, but she finds herself right back where she started: in prostitution.
Through the pain, Angel has lost her soul. There is no hope for a future until a man named Michael Hosea comes and tells her that God told him to take Angel as his wife.
I will not go into all the details, but this story is HARD and heartbreaking. With the tenderness of Christ, Michael loves Angel, yet she rejects him again and again.
Seeing Michael’s heartbreak is difficult. I wanted to shout, “Just accept his love! Why won’t you accept his love?” And that is when it hit me. This is Christ and me. So many times, I’ve tried to do things my way, yet Jesus is right there just wanting me to accept the love He has for me. THIS is what made me cry when I watched Redeeming Love. I saw Christ’s love displayed for me so clearly. But I’m getting ahead of myself …

My Review of the Movie Redeeming Love

I want to go back and say that I’ve known about this movie for the last four years or so. (Maybe longer.) You see, Frani is a good friend of mine. Over the previous eighteen years, we’ve both been part of a group of writers who have gotten together every summer to Plot, Pray, and Play. So I’ve prayed for this movie for many years, and I honestly think it turned out amazingly beautiful. Hard, yes, but amazingly beautiful. There isn’t one scene I would change. I know the purpose of every scene and why it’s essential to the story.
More than that, I know Frani is a woman of Scripture and prayer. On days when we were playing and plotting, Frani often sat pouring over Scripture at the dining room table. When she writes about a topic in fiction, Frani wants to know every place God speaks on that topic before writing one word. And you know what? God displayed what He had to say about redemption through the real-life story of Hosea marrying a prostitute.

When it comes to people speaking against this movie, their main concern is the sexual content, and I want to address that. (Let me remind you, this story is about a prostitute!)

First, the sexual scenes that hint at Angel’s abuse are AWFUL. Like my husband John told me, “No one should call those scenes pornography or worry they’ll bring arousal. Instead, what they bring is complete heartbreak.” Enough abuse is shown that Angel’s pain is clear, and it’s not pretty.
Second, there are scenes of married love–these are the hot and passionate ones. And do you know why they are essential to this story? Because as someone who was used and abused, sex was not a gift for Angel to give or receive until she allowed herself to love and be loved. When Michael and Angel, man and wife (finally!) come together, that’s how it’s displayed: as a beautiful gift. As healing. As hope.
Now you may say, “Well, that shouldn’t be shown in a movie.” My response is, “Okay, then close your eyes if you don’t want to see it.”
Actually, I had to go to the bathroom, and I missed the big sex scene. That works, too! (It’s funny how the timing worked out. I just really had to go.)
Yet when I asked my husband John about it later, he had something insightful to say,

“To deny the positive sexual experience is to accept the negative.”

Is that profound or what?
As horrible as sexual abuse is, married love and sex are beautiful. The fact that someone can find healing after such abuse is a true miracle. And that’s the whole point of this story: redemption.

True love, God’s love, can bring healing to the darkest of places.

Now, if you choose not to see Redeeming Love, that’s fine. It’s your choice. But I want you to know the heart behind this movie and this story. So then, if you choose to watch, you’ll see Francine’s heart. But more importantly, you’ll see God’s heart. No matter what you’ve done or how you’ve hurt Him, God’s love is faithful, and He longs to redeem you and make you His own. Now that’s a beautiful story.

-Tricia Goyer
Here is the trailer that might help you decide:
https://youtu.be/6Z-0C02cqFo