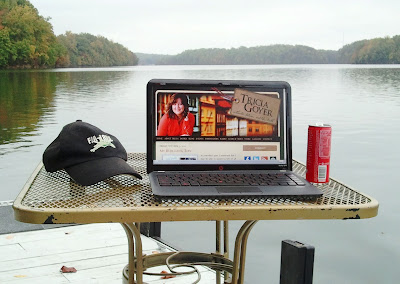 Wish I could say I wrote here all the time, but I do when I can. This is our floating dock on Tims Ford lake in Tennessee. It’s beautiful and has an added advantage: When you’re stuck for the next sentence, you just throw yourself in the lake. I don’t get stuck as often in the winter.

As a Navy fighter pilot I was probably more comfortable around water than words. My dad was a scientist, and I was raised with no exposure to religion. As such, I was an agnostic most of my life. Surprisingly, it was through science that I found God. An engineer by education, I’m one of those weird people who actually likes quantum physics. Physics has become so bizarre that its central tenets now appear to be approaching what most of us would have considered the realm of the spiritual in the past. Instead of competing, I believe one day science and religion may actually converge.
With that motivation and this location—and a lot of help from brilliant editors—it was easy to write. The Resurrect trilogy is fiction. It’s an apocalyptic thriller with a little romance, but it has two messages inside. It accurately portrays threats facing humanity. I also hope to reach those, like I was, who believe they’re too educated to need a supreme being to explain the universe. We all have friends and family who fall into that category. This book is for them.
With apologies to these exceptional authors, my target is Tom Clancy or Dan Brown meets C.S. Lewis.  The book has been optioned for a movie by producer Fred Miller.

Thanks again,Tricia. By the way, if you or your audience, visit the Resurrect Trilogy website, you’ll find it fairly secular. We designed it that way on purpose because we’re specifically trying to reach techno, thriller -oving non-believers . . . feed ‘em first.

David E. Stevens is a former Navy Commander and F-18 fighter pilot. He holds engineering degrees from Cornell and The University of Michigan, with graduate work in human factors and astrophysics. During the Iraqi invasion of Kuwait, Dave served as the Navy Strike Operations Officer for the Persian Gulf. He also test-piloted new fighters, received an aviation patent, and with a Top Secret clearance, led classified defense programs. To learn more about David and the trilogy, visit his website or connect with him on Facebook.