You are here: Home / Community / My Writing Desk | Lisa Wingate 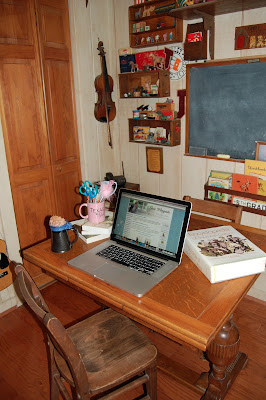 Where do I write?
Among scraps of the past.
I think all writers do. As a writer, you eventually find that the people you create, the places you thought were plucked from the ether are not so misty and ethereal, after all. They’re really just a patchwork of people you’ve known and places you’ve been. They’re sewn together with a fine, glistening thread of imagination, stitched and fitted and nipped, turned this way and that, their textures and colors creating a quilt of story.
Somehow, when it’s all over, the sharp edges blend together into patterns that are pleasing and beautiful, and you have the feeling that you’ve known these people before—that in some way or other you are these people. For me, every story is a blend of past and present, of fantasy and life, of the quirky and the divine. I guess that’s why, over the years, I’ve ended up with a writer space that is a muddle of history, and mystery, and family.
The furniture in my office has voices. I’m sure I need therapy. My little pub table is Writer Central for me. Typically, it’s littered with stacks of to-do lists, notes about stories, research books, messy character studies torn from spiral notebooks. The antique dealer told me it came from an Irish pub, which actually was the reason there’s an Irish love legend involved in Mallory and Daniel’s love-at-first-sight in my latest book, Firefly Island. I was sitting at my pub table when that off-beat detail came to me.
I don’t really even know if my table ever actually graced an Irish pub, but I like to think it did. Sometimes I imagine the lives trapped deep in the grain. What has the wood seen, first as a chestnut tree, then as lumber, then as a table in some shadowy corner? Did lovers kiss here? Did spies meet to plot their schemes? Did friends gather to toast life and share stories of the Emerald Isle?
That’s writer nectar atop the table, by the way: chai tea in a hand-thrown mug sent to me by Elizabeth Weiler, a sweet friend I met after she put one of my books, in her book about book clubs. Chai tea with a little whipped cream on top (the chocolate variety in this photo) is one of those little bribes I offer myself when a nap or Dr. Phil tempts me in the afternoons.
Here’s a link to the recipe, if you’d like it.
I hope it helps to inspire a the birth of a few stories in your writer space!
“Writers aren’t people exactly. Or, if they’re any good, they’re a whole lot of people trying so hard to be one person.” ― F. Scott Fitzgerald
About Lisa: 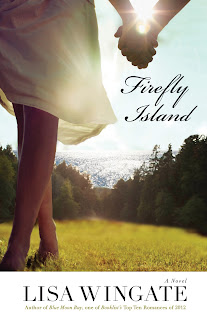 Lisa Wingate is a magazine columnist, inspirational speaker, and the author of eighteen mainstream fiction novels, including the national bestseller, Tending Roses, now in its seventeenth printing.  She is a seven-time ACFW Carol award nominee, a Christy Award nominee, and a two-time Carol Award winner.  She has found success in both the Christian and general fiction markets, writing mainstream fiction for Penguin Putnam and Bethany House. Recently, the group Americans for More Civility, a kindness watchdog organization, selected Lisa along with Bill Ford, Camille Cosby, and six others, as recipients of the National Civies Award, which celebrates public figures who work to promote greater kindness and civility in American life.  More information about Lisa’s novels can be found at www.LisaWingate.com. You can also find her on Twitter, Facebook, and Pinterest, as well as at Southern Belle View on Mondays.
Lisa’s new book, Firefly Island, is currently on tour with Litfuse. Be sure to check out her page, enter to win an iPad Mini, and RSVP to her author chat party on March 19.