You are here: Home / Uncategorized / My Writing Desk | Mary Connealy 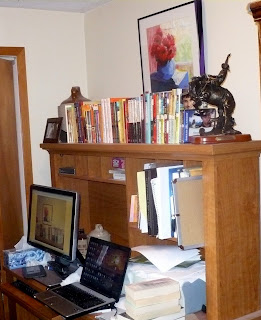 The statue of the bucking horse is one of my prized possessions. I got really interested in western art when I was writing Wrangler in Petticoats. My hero was a western artist. My bucking horse isn’t a genuine, original piece of art—just an overpriced bookend that makes me smile every time I look at it.

The row of books is a version of each of my books in each of its formats. The picture above the desk was painted by a friend who used to live about ¼ a mile away from me on our rural road. She was raising four kids, as was I, and neither of us had so much as a notion that she’d one day be a pretty successful painter and I’d be writing books. I love looking at it. I’ve got my Christy medal hanging from the corner of Karen Cooper’s painting.
On the far end is a barely visible snapshot of me holding my two precious grandbabies. I’ve got my laptop and computer open, which isn’t normal (though it does make me look really industrious, don’t you think?) The rest, well, honestly, I could have tidied up for you, Tricia, but that would’ve been so out of character as to be dishonest. You wouldn’t want me to be dishonest would you??? Huh??? Huh??? 🙂
~~~
Mary Connealy writes romantic comedy…with cowboys. She is a Carol Award winner, and a Rita and Christy and Inspirational Reader’s Choice finalist. She is the author of bestselling Kincaid Brides Series: Out of Control, In Too Deep and Over the Edge. Her work also inclues Lassoed in Texas Trilogy, Montana Marriages Trilogy and Sophie’s Daughters Trilogy.

Mary is married to a Nebraska rancher and has four grown daughters and two spectacular grandchildren. Find out more about her on her website or follow her on Twitter.
Mary is giving away one copy of her recently released novel, Over the Edge. You have until 12:01 a.m. next Tuesday to enter. Only those in the continental U.S. are eligible to win.