You are here: Home / being an author / My Writing Desk | Terri Blackstock (Plus a Giveaway) 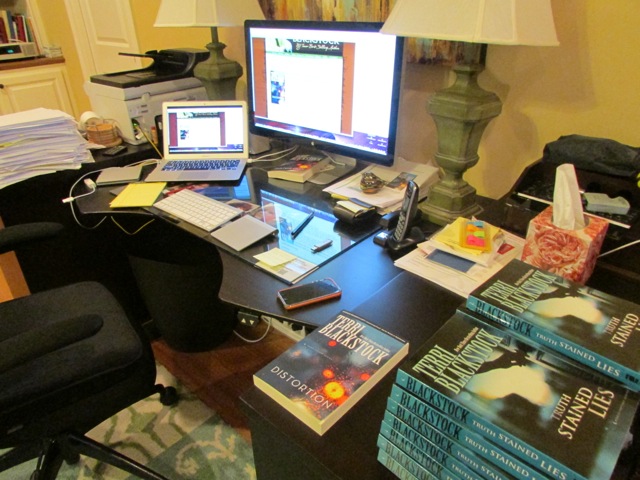 I don’t always write at my desk—I often write in a recliner, in my car, in other rooms—but this desk is my landing place. I deliberately didn’t clean it off before taking this picture, because I wanted you to see it messy. On the left, you’ll see a gigantic stack of papers. Those are manuscript pages, because I still print things out and mark all over the hard copies after each draft. They pile up for each book until I either box them up or shred them. (I hate the thought of people reading early drafts, so I’m fine with destroying them.)

I write on my laptop, but I hook it up to my big monitor when I’m at my desk, so I can see it on the big screen. I have a wireless keyboard and trackpad that feel like my laptop, so the transition is easy. Under glass, I have pictures of my characters, with important stats about them, such as their ages, so I can refer to them often.

At this writing, I’m working on promotional things for my new book Distortion, Book 2 in my Moonlighters Series. (Book 1 was Truth Stained Lies, which released last year.)

Get a sneak peek at where @TerriBlackstock’s novels take shape (cc @TriciaGoyer):

Terri Blackstock has sold over six million books worldwide and is a New York Times bestselling author. She is the award-winning author of “Intervention,” “Vicious Cycle,” and “Downfall,” as well as such series as Cape Refuge, Newpointe 911, the SunCoast Chronicles, Restoration, and Moonlighters. Find out more about Terri at her website.

About Distortion and a Giveaway

Distortion features Juliet Cole, the oldest sister who’s had an idyllic life as a stay-at-home mom and wife of a doctor. When her husband of fifteen years is murdered before her eyes, she thinks it was a random shooting. Devastated and traumatized, she answers hours of questioning, then returns home to break the tragic news to her boys. But a threatening voicemail takes this from a random shooting to a planned, deliberate attack.

Juliet realizes that she and her children are in danger too, unless she meets the killers’ demands. But as she and her sisters untangle the clues, her husband’s dark secrets come to light. The more she learns, the more of her life is dismantled. Was her husband an innocent victim or a hardened criminal? Purchase a copy here.

To celebrate the release of Distortion, Terri is holding a giveaway where you can enter to win a Kindle, and she’s holding a Facebook party tonight! Details and entry forms are here.

PLUS you can enter to win a copy of Distortion below! Only those in the U.S. are eligible to win.