(This photo is me and my son, Nathan taken two weeks ago at the end of the long day at a theme park. 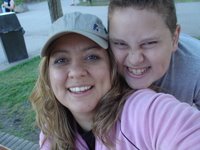 After feeling too sick to ride any more roller coasters, we played around with the camera while the others zipped around Timber Terror.)

I can sum up the 1 1/2 hours I spent yesterday on my novel with one word: Research. I spent my time reading some articles about The Spanish Civil War on the Internet. I scored when I came upon a quote from a newspaper that talked about one element of the war that I’m working into my novel, and I’m toying with the idea of including newspaper clippings like I did with Dawn of a Thousand Nights. Having actual clippings gives a great historical effect, in my opinion. It also can “tell” part of the story for me and heighten the conflict!

I also started digging into a great book on the bombing of Guernica in April 1936. Can you believe Nazis were involved in the war in Spain long before WWII started? I don’t want to give too much away, but they were!

I also started jotting down notes of minor characters. Who will live. Who will die. I’m horrible, I know. But I do write about war, after all.

Finally, why only 1 1/2 hours? I’m supposed to be writing a novel, after all.

Orthodontist appointment (for me), working with kids on their homeschool (rain forests was the main topic yesterday), and I taught a writing class for teenaged homeschoolers. It’s a once a month writing club. I teach a lesson and the kids bring stories for each other to critique. It’s very fun and inspiring. These teens love books and stories and they let their imaginations run wild. I learn a lot from them!

Of course, I had writing scheduled for the rest of the afternoon, but we all know how things change. (I ended up “researching” after dinner while I waited for my turn with the dancing video game I play with my kids. Dance. Sit down and research. Dance . . . )

My writing schedule changed when a phone message from the producer of a network talk show wanted to, uh, talk with me. We chatted for an hour, then I helped one of the teen moms I mentor with some paperwork. It appears at least one of “my” teen moms is going to NY to be on a program . . . More than one might end up going, and maybe me too. Yes, I’ll clue you in once I know all the details!!!

And it’s true, sometimes life IS stranger than fiction!