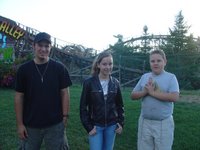 (This photo is of my kids. They really don’t have anything to do with my novel update, but I posted their photo because they are cute. Okay, they do require lots of time . . . but they are worth it. And if my novel is late I can blame them. Just kidding!)

I ordered a used book online a few weeks ago and my research has been focused on reading it. Unfortunately, I can’t give you the title or I’d give away part of the surprise plot I’m formulating for Book Two!

It’s a old novel, printed in Great Britain. Because it’s about The Spanish Civil War, I know it’s written sometime after 1939, but before 1944. I know this latter date because of the inscription in the book:

from Hilda & George.
Wishing you the compliments of the season and good drinking.
1944.

Doesn’t that make you wonder about Billy, Hilda, and Georgie boy?

After a busy day yesterday, I wondered if I was going to have to change the title of this blog series to “How to Write a Novel in One Hour a Day.” But today I had more time. Yeah!

I’m jotting down ideas as I research, organizing the research by character. I’m still trying to figure out how many POV characters are too much. (What do you think?)

It’s a struggle because a few of my minor characters from Book One are demanding time in the limelight . . . but, of course, my main characters don’t like giving up their story for the sake of others. What’s a writer to do? Take notes of course, and pray the correct POVs will rise to the surface. (And, I remind myself, God knows the story that should be written, and He sees the completed book. That gives me confidence.)

I did want to mention a bit more about color coding. As I research, I take notes concerning the various characters. I arrange the research in the order which I will need it, and then each character has a unique color.

For example, Sophie will open the book. I start by putting down her name and highlighting with green. Then all my notes for the opening scene go there.

Next is Ritter. He’s light blue. After that, Deion is dark blue.

The colors help with setting up scenes AND when I’m looking for a bit of research, I can quickly scan through my document and find the right color.

Since, this is a sequel, I’m also taking notes as I work with my editor on Book One. For example, a minor thing I mentioned in the first book has the potential of becoming a major theme in Book Two.

Sigh. Nearly time to finish making dinner . . . Bye for now. I’m going to try to squeeze a few more minutes of research in!