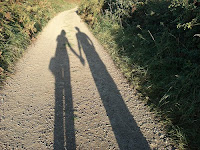 My husband John and I have led numerous marriage small groups and there has been a common thread among them all–women have a hard time understanding “respect.”

What does that mean?
Can you give examples?
I thought I was being respectful, but obviously not.

When I talk about respect on my blog or radio show, I’ve gotten the same questions. So … I thought I’d ask some men their thoughts. What a concept!

Here are some comments from a few of my Twitter/Facebook friends.

1. Prays for me regularly. Listens to me and let’s me share the ups and downs of my day and doesn’t always try to resolve the issues 😉 Jeff

2. When she offers me the biggest slice, I know she respects me. When she eats the center right out of the middle of the cinnamon roll, I don’t think she does. Chad

3. To save gas she will do shopping on her way home. But she will not spend willy nilly. Any big purchases we both talk over. Even though I am not out in the work force per say I am made to feel that my money counts tOo. Anonymous

Daniel Darling, Senior Pastor of Gages Lake Bible Church and author of iFaith said, “The way my wife treats my life work shows me respect.” I asked him to elaborate, and this is what he said:

Men need respect like women need love. It’s the fuel that drives them. Most people think respect means titles, authority, and treating a guy like a king. But what a guy really craves is to to know that his wife believes in him. With that, a man can do anything and it will drive his love for his wife. I think this is especially true when it comes to a man’s life work, his calling. God wired men to work, not just to provide, but to make an impact, to create and build and be something. Work is his life. He is conquering more territory, moving up, doing something.

But when a women tears down her husband, it chips away at his confidence. Men act tough, but down deep they crave the confidence of the women they love. When a man comes home and is greeted like a hero by his wife and kids, he can soar.

I’ll use an example. When I was in college, I was dating this girl. Good Christian girl, pastor’s kid. But when I told her of my passion to write, she said, “I just don’t think I can handle that. I really envisioned marrying someone who was a pastor.” And when I was with her, I always felt less, like I didn’t measure up. Fast forward a few years and I’m dating Angela. Angela, from the beginning, believed in me, thought what I did was noble, was proud of me. Well, we’ve been married eight years. And when she makes me feel like a hero (even though I don’t always act like one). I soar and it motivates me to love her and provide and protect her more.

Funny thing? I ended up being a pastor after all.

The best way a woman can help her man step up and be a man (a real problem in many marriages) is to show him that she believes he can do it. To encourage him up, rather than tear him down. This doesn’t mean endless flattery. You can be real and honest and speak truth and still do it up. In other words, “I know you can be a great father, etc.”

I love all these comments. They’ve given me things to think about. The input from these men will help me respect my husband better. I hope it’ll help you, too.