You are here: Home / books / The Reliance by Mary Lu Tyndall

ABOUT THE AUTHOR:
M. L. (MARYLU) TYNDALL grew up on the beaches of South Florida loving the sea and the warm tropics. But despite the beauty around her, she always felt an ache in her soul–a longing for something more.

After college, she married and moved to California where she had two children and settled into a job at a local computer company. Although she had done everything the world expected, she was still miserable. She hated her job and her marriage was falling apart.

Still searching for purpose, adventure and true love, she spent her late twenties and early thirties doing all the things the world told her would make her happy, and after years, her children suffered, her second marriage suffered, and she was still miserable.

One day, she picked up her old Bible, dusted it off, and began to read. Somewhere in the middle, God opened her hardened heart to see that He was real, that He still loved her, and that He had a purpose for her life, if she’s only give her heart to Him completely. 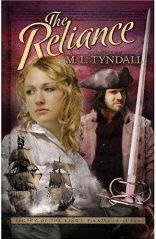 ABOUT THE BOOK:
A YOUNG BRIDE separated from her husband just as a child has been conceived…

In THE RELIANCE, Edmund Merrick tormented by the apparent demise of his pregnant wife Charlisse, sails away to drown his sorrows. He turns his back on God and reverts to a life of villainy, joining forces with the demented French pirate Collier. When his mind clears from its rum-induced haze, will Edmund find the will to escape?

Seemingly abandoned by her new husband, Charlisse battles her own insecurities as she is thrown into the clutches of the vengeful pirate Kent, who holds her and Lady Isabel captive.

Will she be swept away by the undertow of treachery and despair? Can Edmund and Charlisse battle the tempests that threaten to tear them apart and steer their way to the faith-filled haven they so desperately seek? Or will they ultimately lose their love and lives to the whirlpool of treachery and deceit?

And…don’t forget to check out today’s stops on the blog tour for A Valley of Betrayal!
http://deborahraney.blogspot.com/
http://blog.alisonstrobel.com/