You are here: Home / Uncategorized / Remembrance of Liberation 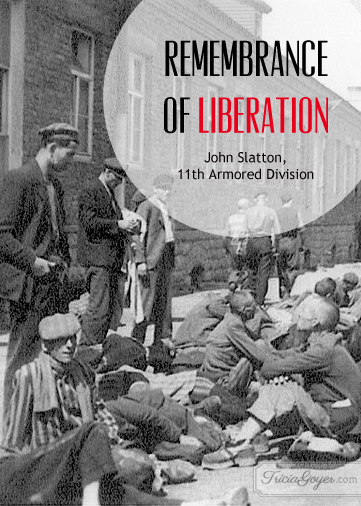 70 years ago on May 5th, Mauthausen Concentration camp was liberated by 23 men from the 11th Armored Division. Here is the true story told to me by one of my WWII veteran friends!

My Remembrance of Liberation

by John Slatton | as told by Tricia Goyer

On May 5, 1945, when the war in Europe was winding down, I served in First Platoon of Troop D, 41st Cavalry Reconnaissance Squadron, Mechanized. My job was the gunner and radio operator in Sergeant Harry Sander’s armored car.

We left Katsdorf, Austria early that morning. Our mission was to scout a route across the Danbue River for our 11th Armored Division tanks. We hadn’t been on the road for more than fifteen minutes when we came to a roadblock of fallen trees. Within minutes, we secured our position and cleared the trees, but just as we prepared to move forward, a little white car approached flying a white flag of surrender. A representative of the Swiss Red Cross drove, bringing the commandant of the Mauthausen concentration camp to meet our troops. The Red Cross worker assured us that the commandant wished to surrender the death camps in that area to General Patton.

Sergeant Albert Kosiek commanded our platoon at this time. Kosiek stated, “I directly represent General Patton, and our platoon will take command of the camps.”

The commandant warned Kosiek that twenty-three men would not be enough to handle the many German soldiers. Kosiek’s answer was firm, “Then you don’t know my men.” But at that time, Kosiek had no idea the horror we’d soon face.

Our armored trucks and jeeps approached the camps with caution, winding our way through the small community of St. Georgen. In the middle of the quaint town we discovered Camp Gusen. The camp consisted of wooden barracks, barbed wire fences, and entanglements. The German guards stood at attention as we neared, their gun muzzles facing downward. But before we had a chance to provide much help to the thousands of prisoners, we were forced to move on to the mother camp, Mauthausen, where more German guards were awaiting surrender. 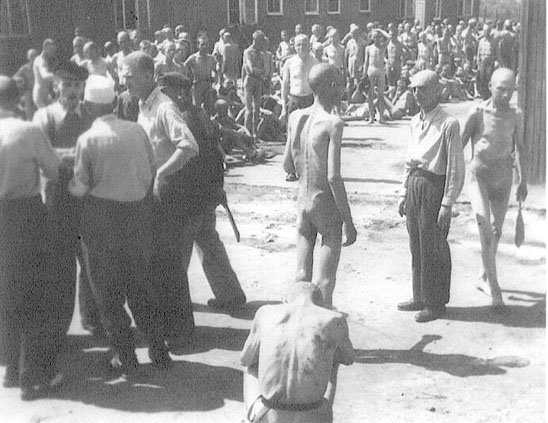 My goodness. We didn’t expect anything like what we witnessed at Mauthausen. It was horrible. Thick granite walls and prisons, designed to last a thousand years, covered the hillside. Skeletal prisoners were everywhere—both dead and alive. Those barely hanging on to life apparently knew we were coming, and as we approached a mob surrounded our vehicles. Sergeant Kosiek spoke to the crowd in his native tongue of Polish. Cheers of those who understood rose after each sentence. A Jewish soldier, Rosenthal, spoke several dialects of Hebrew and German. Another soldier spoke Spanish to the many prisoners from Spain.

In the end, the people finally understood their freedom. And although we couldn’t offer much help with our limited supplies and expertise, we promised that medics and nurses, cooks and clergy, would arrive the next day.

When we returned to base camp that night, our platoon of twenty-three men had rounded up over two thousand German guards. Also journeying with us was a former prisoner. Lieutenant Jack Taylor, part of Navy intelligence, had been captured and taken to Mauthausen many months prior. That night as he rode in my armored car, Lt. Taylor told me about evidence he’d buried in the camp grounds—other American, GI dog tags he’d risked his life to save. Lt. Taylor also told me how he’d been in line for execution three times, and how each of those times a Russian soldier had pushed him out of the way, taking his place. The Russian soldiers had given their lives to save Lt. Taylor’s. They needed the American soldier to survive. Needed his voice, his position, to bear witness to the Nazi atrocities in the camps.

I will never forget that day of liberation. I have been back to the area twice. The first time was in 1975. The International Mauthausen Committee had invited three other liberators and myself. The second time was in 1989 when a Swiss television documentary, “The Forgotten Savior,” was filmed in honor of the Swiss Red Cross gentleman who’d led us to the camps.

Yet, going back to Mauthausen was not as easy. When I went back in 1975, one thing destroyed me. The camp had monuments, statues, and memorials for all kinds of people—the Italians, French, Belgians, and British. But nothing mentioned the Americans, the ones who liberated the camp. I returned home determined that America would have some sort of marker. Something to let future generations know about the deeds of the men I served with.

I went before Congress, but soon discovered Congress can not spent money on overseas monuments. My next plan was to approach members of 11th Armored Division Association for funds. Instead, when the International Mauthausen Committee and the Austrian government heard of our desire, the Austrian government agreed to pay for the plaque.

It’s not a big thing, but we have a 3-foot by 5-foot marble marker attached to the prison walls, stating:

“In remembrance of the members of the 11th Armored Division of the Third U.S. Army who liberated the concentration camp at Mauthausen, Gusen, Ebensee and others located nearby in Upper Austria. In May 1945. Their deeds will never be forgotten.”

It thrills me to know that the plaque will always remain as a reminder—even after the last liberator has passed on. After all, it was an ordinary humanitarian worker who approached our armored column that sunny, May day. It was twenty-three ordinary soldiers who opened the gates to freedom, bringing hope to thousands. And years later it was also just one ordinary veteran who made sure the deeds of his friends would never be forgotten.

@TriciaGoyer shares the true story of the liberation of Mauthausen camp here:

Stop by my Facebook page this week for the chance to win a copy of Remembering You! Click here and here for more info and be on the lookout for more ways to win.