I was a guest on my friend Camy’s blog, Camy’s Loft. Her post was so great…I begged her to let me post it on my blog as well. Thanks Camy! And here we go…

As something unique and different for my blog (because she likes me! :)) Tricia gave me some pictures that the World War II veterans sent her while she was researching for her novel. Not everyone has broadband, so I posted them here on my scrapbook blog.

Here’s what Tricia has to say about them:

One of my favorite parts of researching is connecting with
veterans. While researching for Arms of Deliverance, I found some amazing men from
the 91st Bomb Group, based in England.

Here’s a sneak peek at some of the photos they sent to me to help with
my research. These are the photos that helped as I wrote my scenes.
Are they cool or what?!

This is an illustration of the pilot’s control panel sent to
me by veteran
John Howland of the 91st Bomb Group. 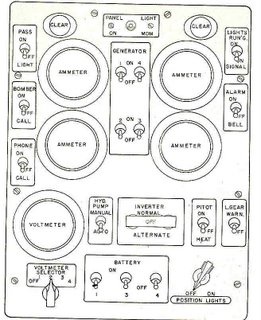 This is an example of the shirt and pants of an OD uniform sent
to me by veteran John Howland. He said, “It wasn’t very attractive,
but it was wool and it was warm in that harsh English climate.” 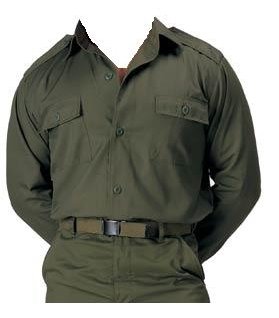 These are photos of the Norden bombsight and
the tracks for 50 cal ammunition fed to the twin 50 chin turret
below the bombardier. Also visible is the astrodome used by the
navigator and the navigator’s table. The photos were sent to me by
John Howland. They all play a part in “Arms of Deliverance.” 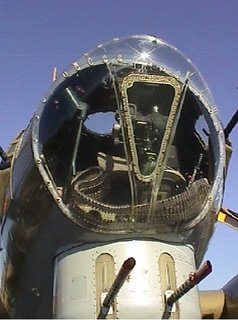 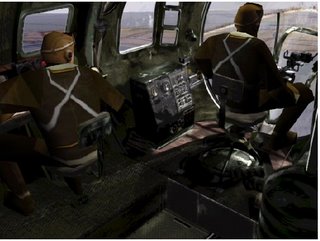 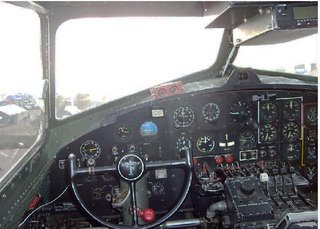 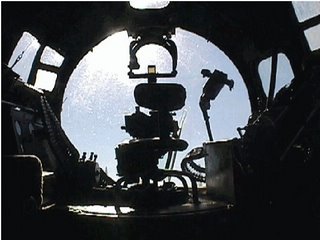 Here’s a picture of a WW-II throat mike sent to me by John Howland. 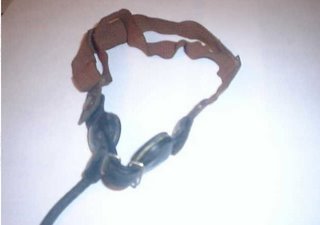 Here is a link to the official website of Liege, Belgium, sent to me by my
Belgian friend, Roger Marquet.
http://membres.lycos.fr/risack/homeg.html

Here are interior photos of a B-17. They were sent to me by Joe
Harlick and TAKEN by Joe Harlick during WWII. Here is what Joe had to
say:

“The third is a photo of me loading a K-17 Bomb Strike Camera in the
camera pit under the radio room floor One third of our planes, on
each mission, carried a bomb strike camera. The cameras are all
preset for shutter speed and ” f stop ” exposure settings. They
would be turned on at bombs away and make an exposure every 6 seconds,
then rewind the film. They would continue running until well beyond
the target that was hit. The particular camera in the photo makes a
9 1/2 x 9 1/2 inch negative. We would pick up the film magazine as
soon as one of the planes landed and rush it back to the photo lab,
process the film, make wet prints from wet negatives. These were
hand carried to the commanding officer and woud be referred to during
crew interrogation after the mission. They would have immediate
answers as to the weather condition, if they hit the target, and an
estimate of the damage to the target.” 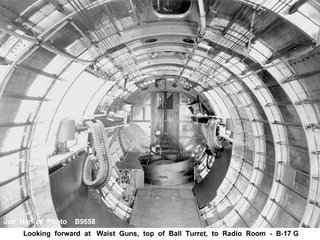 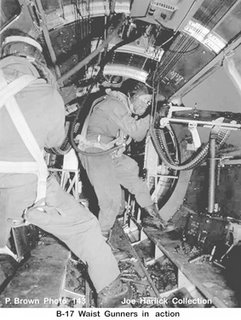 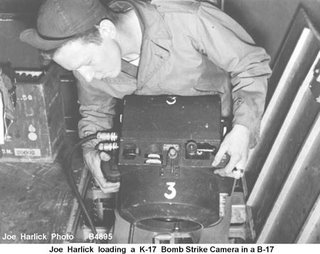 Here is a photo of a Navigator sent to me by Joe Harlick and TAKEN by
Joe Harlick during WWII. This was my inspiration for Eddie! 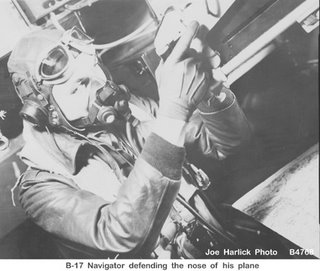 These are more photos from Joe Harlick. Each photo has a caption.

Joe said, “You will find that 99% of my photos are black & white,
color film was rare and used mostly by the PR photographers from
London. Some individuals had 35 MM Kodachrome film sent to them from
the states. The flight crews were not supposed to carry camera’s on
a mission, but some officers did, especially the latter part of the
war.” 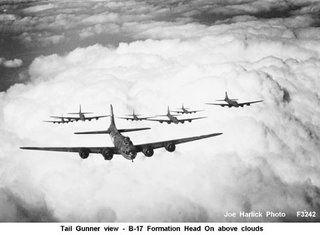 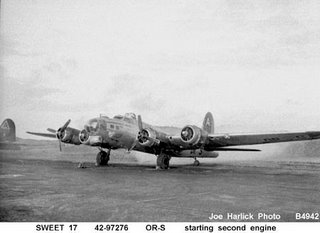 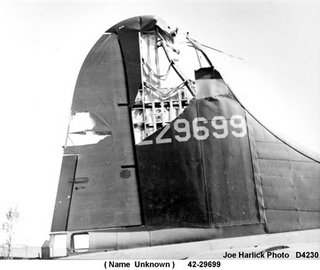