You are here: Home / articles and blogs / Stories for buttons travel contest…

Here is another entry in the Stories for buttons contest! This one is from Grace who lives in New Zealand!

Don’t forget to leave your comments–Remember the story with the most comments wins!

I couldn’t resist this one. But I have a problem. What story do I talk about?

I could tell of night-time boat rides to a volcanic island, where we then had to hike through the bush to a clapboard hut at the mudflats.

I could tell of four hours of huge waves under a jetboat’s keel, followed by an hour in a rusty bus on windy gravel and dirt roads which lead to a place that must come pretty close to heaven.

I could tell of a one-roomed youth hostel in a tiny beach town called Okarito in the deep south of New Zealand, my homeland.

I could tell of winter’s culture shock on my first trip to Germany.

I could tell of my first encounter with Turkish food. It happened in Australia.

I could tell you about my love affair with Africa, and how I got stranded in Timbuctu. Sounds like a great story, but it was really only petty fraud. A travel agent sold us seats on a return flight that didn’t exist…

I could tell of walking from Switzerland to France and back again in the mountainous borderlands near Geneva, and of driving hairpin bends in the Bavarian Forest to translate for visiting dignitaries from Botswana who were inspecting the Czech border post. Or the time I spent all day at a castle perched on a hill to translate into English for a French businessman. That was just last week…

I could tell of a literary holiday in Tunisia, but the videos on my homepage do a better job.

I could tell of springtime in Ireland, but I’m not going there till next month…

And I could tell of living in a house that was built in the 1200’s. But that’s not travel, that’s home. For now, at least.

Whoever said Kiwis can’t fly? This one can…

I know the contest calls for a story, but perhaps this will do as well…. 🙂 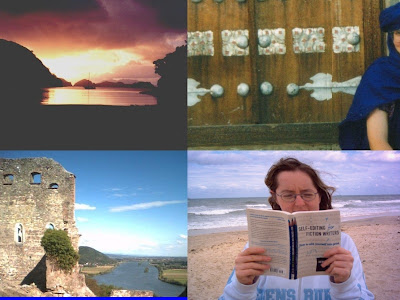 And…well, the blog tour for A Valley of Betrayal is almost over, check out these last stops: