You are here: Home / books / Stories for buttons…

Every spring I get the itch to travel the world.

Maybe it’s because I remember what spring time was in Europe.
In one word: Beautiful!

But not every trip is without challenges. In fact, here is one amazing travel story I just had to share.

(Tricia Goyer, Cindy Martinusen, and Anne de Graff the night before their travel adventure!)
Imagine a seven-day road trip with two friends, driving through six European countries in eight days. My first European vacation went off without a hitch, until our last afternoon.The line of cars at the border warned us something was wrong, and the ruggedly handsome border guard spilled the news. The Austrians were protesting the building of a Czech nuclear power plant. The border was closed.”But is there another way?” my friend Anne asked, flipping through her Czech dictionary for assistance. “We have to catch a plane in Vienna tomorrow.”
The Czech guard nodded and took our map. He outlined another path, showing us a lake to cross near the border. With a quick thank you, we were off. Soon our car wound its way down a country two-lane road that I’m sure few American tourists have traveled.
An hour later we arrived at the village. We found the lake, but there was no bridge. We asked an old man who was fishing how to cross. There was no bridge, he said, but a one-car ferry. The last one would be leaving in thirty minutes. When we boarded, the only other passenger was a young school girl whose Spaniel waited on the other shore.
We found the border, crossed, made our way to Vienna, catching the plane. Personally, I’m thankful for the protest. The people’s cries and blockades forced us onto travel a road unraveled, discovering a beautiful part of the Czech Republic off the beaten path. Amazingly, the same day we crossed the border is the day I got the idea for From Dust and Ashes. We were a little late, but that afternoon we met up with a historian that told me about the true events around the liberation of a concentration camp. It was her story that inspired my first novel. And it’s an adventure I’ll never forget.
Now it’s your turn! Do you have an amazing travel story? If so, send it to me, 300 words or less. Also, send an attached photo if you have one! If your story is chosen to be featured on my blog during March and April, you will WIN a From Dust and Ashes button.

But that is not all.

At the end of the contest, the person with the most COMMENTS concerning their travel story will also win a From Dust and Ashes t-shirt! 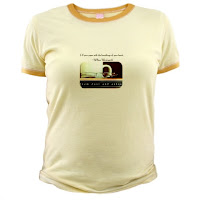 Only one comment per person applies-so if your mom comes on and comments a lot, that will only count as one!

Send your travel story, 300 words or less, and photo to bookmarketing@triciagoyer.com
I can’t what to hear about YOUR adventures!

Also, be sure to check out MORE t-shirts at www.cafepress.com/lesleysshoppe
Blue Cookie Designs is a joint effort by me and my sister, Lesley. Part of the proceeds from the sale of the items will go to pay for travel to China to pick up our adopted girl next year! That will be a travel story I’ll be sure to blog about!