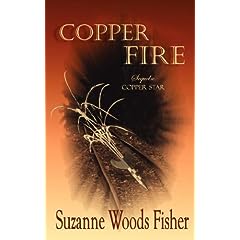 A wife and mother, Fisher lives in the San Francisco Bay Area and raises puppies for Guide Dogs for the Blind. The best thing about being a writer, she feels, is that all of life becomes material for writing. It’s all grit for the oyster.Suzanne can be found at http://www.suzannewoodsfisher.com/.

During the month of June, Suzanne is running a book-a-day-giveaway contest. For the details check out her blog (http://suzannewoodsfisher.blogspot.com/).

ABOUT THE BOOK
Copper Fire is the sequel to Copper Star, picking right up at the very end of World War II. On a summer day in 1945, my main character, Louisa, receives a telegram from the International Red Cross Tracing Service. She discovers that her cousin, Elisabeth, has just been released from Dachau. Louisa is determined to go to Germany to get Elisabeth…and that’s where the story begins.