You are here: Home / Uncategorized / That’s (Not Exactly) Amore by Tracey Bateman Tracey Bateman published her first novel in 2000 and has been busy ever since. There are two other books in the Drama Queen Series, Catch A Rising Star (#1) and You Had Me At Goodbye (#2)

She learned to write by writing, and improved by listening to critique partners and editors. She has sold over 30 books in six years.
She became a member of American Christian Fiction Writers in the early months of its inception in 2000 and served as president for a year.

Tracey loves Sci-fi, Lifetime movies, and Days of Our Lives (this is out of a 21 year habit of watching, rather than enjoyment of current storylines.

She has been married to her husband Rusty for 18 years, has four kids, and lives in Lebanon, Missouri. 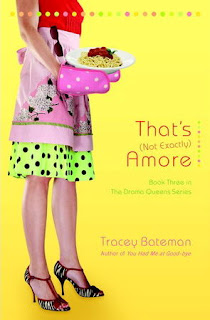 When Laini Sullivan lands a job designing Nick Pantalone’s coffee shop, there are two problems: one, Nick’s nephew Joe hates all of her ideas and two, Laini has to admit he’s right–she’s a disaster at design. Still, she can’t risk losing the job. To compromise, Joe brings in help on the project, while Laini continues to bake the goodies that keep his customers lining up.
Their relationship is moving along, so when new guy Officer Mark Hall implies that Joe’s family is tied to the mob, Laini doesn’t want to believe it. But things spin out of control when she meets the family, including “the uncles,” who seem to confirm Mark’s suspicions. To make things worse, Nana Pantalone makes it clear Laini isn’t the kind of girl she has in mind for her grandson. Laini’s not sure if she should give Joe the benefit of the doubt or just set her sites on Mark and fuhgetaboutit.

“Tracey draws us into the world of family and friendship with a few surprising twists along the way Bravo!”
~RACHEL HAUCK, author of Diva NashVegas and Sweet Caroline

If you would like to read the first chapter of That’s (Not Exactly) Amore, go HERE