You are here: Home / writing / The Story Behind A Valley of Betrayal

Today I’m sharing the story behind A Valley of Betrayal. The Spanish Civil War started July 17, 1936, and is widely considered the dress rehearsal for World War II. The history is fascinating and inspired my Spanish Civil War Series which looks through the eyes of those who might have lived through those turbulent times. 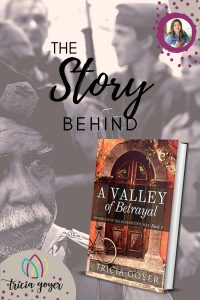 A few years ago, when I was researching my fourth World War II novel, Arms of Deliverance, I came across a unique autobiography. One B-17 crewmember I read about claimed to make it out of German-occupied Belgium after a plane crash due, in part, to his skills he picked up as a veteran of The Spanish Civil War. Reading that bit of information, I had to scratch my head. First of all, I had never heard of the war. And second, what was an American doing fighting in Spain in the late 1930s? Before I knew it, I uncovered a fascinating time in history—one that I soon discovered many people know little about.

Nazi tanks rolled across the hillsides, and German bombers roared overhead, dropping bombs on helpless citizens. Italian troops fought alongside the Germans, and their opponents attempted to stand strong—Americans, British, Irishmen, and others—in unison with other volunteers from many countries. And their battleground? The beautiful Spanish countryside.

From July 17, 1936-April 1, 1939, well before America was involved in World War II, another battle was fought on the hillsides of Spain. On one side were the Spanish Republicans, joined by the Soviet Union and The International Brigade—men and women from all over the world who have volunteered to fight Fascism. Opposing them, Franco and his Fascist military leaders were supported troops, machinery, and weapons from Hitler and Mussolini. The Spanish Civil War, considered the “training ground” for the war to come, boasted of thousands of American volunteers who joined to fight on the Republican side, half of which never returned home.

Unlike World War II, there is no clear line between white and black, good and evil. Both sides committed atrocities. Both sides had deep convictions they felt worth fighting and dying for.

The Loyalists—also know as the Republicans, were aided by the Soviet Union, the Communist movement, and the International Brigades. If not for the weapons and volunteers from these sources, their fight would have ended in weeks rather than years. While many men fought side by side, their political views included liberal democracy, communism, and socialism. The Catholic Basque Country also sided with the Republic, mainly because it sought independence from the central government and was promised this by Republican leaders in Madrid.

The Nationalists, or Francoists, were aided mainly by Germany and Italy. The Nationalists opposed an independent Basque state. Their prominent supporters were those who believed in a monarchist state and fascist interests. The Nationalists wished for Spain to continue as it had for years, with wealthy landowners, the military, and the church running the country. Most of the Roman Catholic clergy supported the Nationalists, except those in the Basque region.

During the Spanish Civil war, terror tactics against civilians were common. And while history books discuss the estimated one million people who lost their lives during the conflict, we must not forget that each of those who fought, who died, had their tales. From visitors to Spain who found themselves caught in the conflict, to the communist supporters, Basque priests, and Nazi airmen each saw this war in a different light. These are the stories behind A Valley of Betrayal.

A Valley of Betrayal 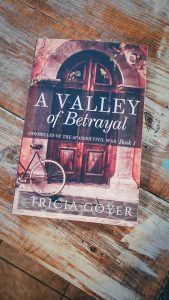 For reasons beyond her control, Sophie finds herself alone in the war-torn Spanish countryside. What was once a thriving paradise has become a battleground for fascist soldiers and Spanish patriots. It doesn’t take long for Sophie to realize just how far from home she really is.

Caught in the middle of what is quickly becoming a bloody battleground, she receives tragic news, but remaining in Spain is her only option. The route to safety is blocked and fighting surrounds her. On her darkest night, Sophie takes refuge with a brigade of international compatriots. It is among these volunteers, through the use of her fiancé’s camera and her art, that she pledges to make the plight of the Spanish people known around the world.

A Valley of Betrayal is book one of a three-book series and is perfect
for women who like reading romantic novels inspired by historical periods, international fiction, or literature inspired by the Spanish Civil War written by Hemingway, Dos Passos, and George Orwell.

If you enjoy A Valley of Betrayal, check out the other books in the series – A Shadow of Treason and A Whisper of Freedom. 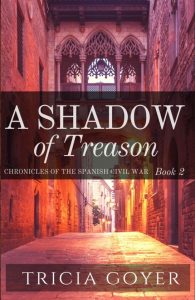 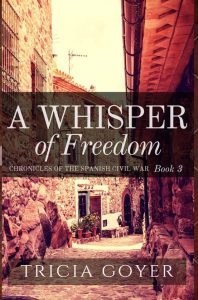