You are here: Home / it's real life / Veteran’s Day: A Blast From the Past

In early October, my dad received a phone call inviting him to be the special guest on a media flight aboard the Liberty Belle, a restored B-17 which would be making a stop at an airport near Nashville. My sister and I eagerly accompanied him to the airport on October 5 and soon basked in the joy of watching our 86-year-old father treated like a rock star. 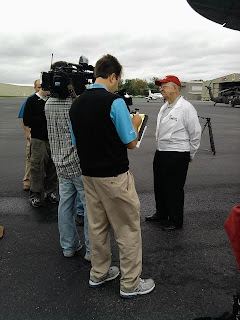 It had been over 64 years since Glenn Hale flew in a B-17. He considered himself a “draft dodger” of sorts, enlisting in the Army Air Corps when he was 18, thereby able to choose which branch of the military in which he would serve. Dad wanted to fly! 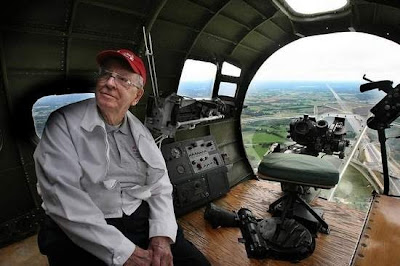 He reported for service in February of 1943, shipping off to Sheppard Field in Wichita Falls, 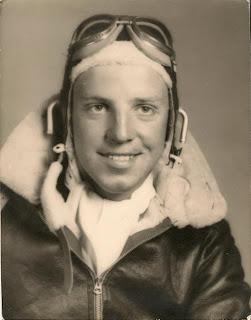 Texas for boot camp. Later he would pass the necessary qualifications to become a pilot and head for Stockton, California where for two months he learned to fly multi-engine planes in Advanced Pilot Training. His graduation ceremony was filmed for a scene in the 20th Century Fox movie, Winged Victory, which was released in late 1944. (Later, Dad got to see the movie in London with his brother Harold who was on leave from the Field Artillery. Harold quickly spotted his younger brother on the big screen.)

Stationed at Framlingham, England, Second Lieutenant Glenn Hale served as a co-pilot in the 390th Bombardment Group, 570th Squadron of the Mighty Eighth Air Force. Dad flew 14 missions between December 1944 and July 1945, all to German targets. Ironically, records from the 390th indicate that he once flew aboard the original Liberty Belle on December 30, 1944.

But the flight he remembers most took place on March 2, 1945. From the beginning, the crew knew their B-17 had engine problems. Five hours into flight, Pilot Dick Alberts dropped out of formation and headed for Poland so they could bail out over Russian-occupied territory. Dad had never jumped before. In the moments before he exited the aircraft, he remembers making a deal with the Lord, promising to read the entire Bible if he survived. “He kept his side of the bargain in 10 minutes,” he recalls. “It took me many years later.” 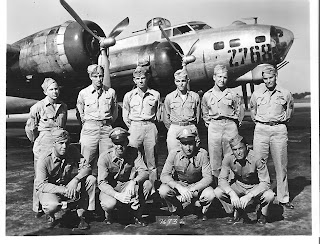 And then he jumped. Scared at first, once his chute opened he said he actually enjoyed the descent. He landed near a farmhouse near Turek, a small town in central Poland. He and his fellow crew members were then transported by train to Odessa, Ukraine on the Black Sea. Two months to the day from their bailout, they landed back in Framlingham—the same week the war ended.

While bailing out of a B-17 left an indelible imprint in Dad’s memory, it was the next mission for which he is most proud. As part of Operation Chowhound, he and his crew had the privilege of making a food drop over German-occupied Holland. The Dutch were starving, forced to eat tulip bulbs to survive. Dad was so gratified to be part of a mission that saved people rather than destroy things.

Glenn Hale began his journey home to the states in late June of 1945, his last flight as part of the Flying Fortress. He arrived on American soil on July 4th, and yes, with heartfelt emotion he knelt down and kissed the ground. “I entered the service as a boy, and I came home a man,” he says, the unmasked pride twinkling in his still-blue eyes. Thanks to the GI Bill, he completed his education at the University of Iowa where he also met the love of his life. Glenn and Anita Hale were married for 58 years until cancer took my mother’s life in 2007.

As the restored Liberty Belle took off on that Monday in October to the familiar deafening roar of the plane’s engines, Dad sat just behind the co-pilot’s seat. “It’s like being back with an old friend,” he told the reporters clustered around him. “Every time we took off on a mission, I always had the thought in the back of my mind, ‘Will I be back tonight?’”

It wasn’t until 1983, when he saw an article in his hometown Tulsa newspaper about the 390th looking for veterans for a reunion, that he reconnected with many of his old war buddies. He and mom attended the reunions for over 20 years. This year’s gathering was held in Nashville where Dad now lives. The Liberty Belle’s visit to the area was in honor of those remaining vets. And Glenn Hale will tell you his invitation to ride on that B-17 was one of the highlights of his life.

This Veterans Day, I thank God for my father and all the others who have willingly fought for our country. As he so often reminds us, “Freedom doesn’t come free.” May we never forget that lesson, Dad. 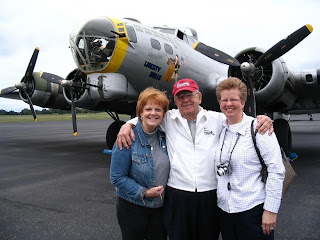