You are here: Home / Walk It Out / Walk it Out Stories: When You Have to Work for Faith | Amy Matayo 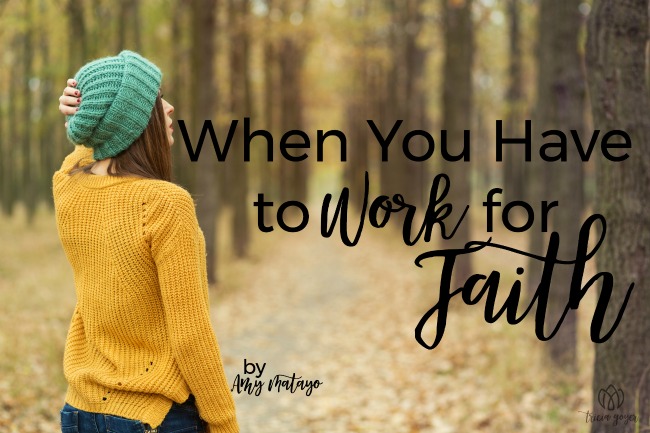 I’ve always said that I like kind, authentic people—people who pour their souls out either in voice or on paper and then say to the world, “This is me, take me as I am.” Without rudeness or pious attitudes, of course. I’ve always said this.

So in the spirit of taking a little of my own medicine, practicing what I preach, meaning what I say, and all the other clichés that point to my serious need to stop talking so much . . . now I say this: Faith isn’t always easy for me. It isn’t. Sometimes days go by until I realize I haven’t uttered a single prayer. Sometimes I walk by my Bible and notice there’s a layer of dust covering the top of it. Sometimes the alarm goes off on Sunday morning and I think of how much fun I could have if I skipped church and binged-watched Pretty Little Liars instead (that last one is an exaggeration—I’ve never actually watched Pretty Little Liars. The rest of the sentence though . . . ) Bottom line: I’m not always good at faith.

But thank goodness that faith—in the form of God Himself—is always good to me.

When I want to quit, He doesn’t.

When I’m at the end of my proverbial rope, He lengthens the line a little bit more.

It’s been a rough year. A rough couple actually, but the last four months have really knocked me and my family over the head. The kind of two-by-four knocking that comes with tears and confusion and a whole lot of asking how much more are we supposed to take? (Side note: never ask this question, even internally. One, God can hear you and two, there will always be more. Another side note: it’s kinda like praying for patience. Never do that either). Anyway, it’s been a rough few months. At times it feels like I’m losing control, losing my grip, even losing people.

Not the people who matter.

And I’m never losing control, not when God’s in charge.

I realize this post is vague—that’s intentional. But it’s also truth in the best way I can explain for now. God doesn’t give up, even when you want to. God doesn’t release you, even when you try to shake Him off. God doesn’t cower to your desire to watch silly television shows, He’ll wait until the show’s over. But most importantly…

More about The Whys Have It: 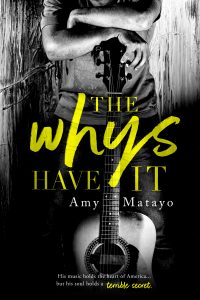 His music holds the heart of America…but his soul holds a terrible secret.

Chart topping pop musician Cory Minor has it all—fame, money, more women at his disposal than time to spend on them. He’s living the life most American men only dream of. Until an ordinary concert in Springfield threatens to destroy everything he’s worked for. As he and his band leave the arena for his next show, Cory’s tour bus crashes into two teenage girls, killing one girl instantly and leaving the other barely clinging to life. Lawsuits are threatened, tabloids are talking, and Cory’s idyllic world falls apart. But what no one knows is that this scene is all too familiar. Because this isn’t the first accident Cory has caused. This isn’t the first time he’s destroyed someone else’s life to save his own. It’s just the first time he’s had to face it head on.

Small town girl Samantha Dalton has no one—no mother, no father, and now no sister. She’s lost everything in a world that celebrates excess. So when Cory Minor shows up at her doorstep offering money and apologies, she turns him away too. You can’t lose what you don’t have, and she can’t take another letdown, especially not from someone who has managed to rip away all she had left. Samantha has been fine on her own for years, she’ll be fine now too. At least that’s what she tells herself. But Cory won’t leave. He’s persistent in the worst possible way.

Will Cory’s determination to make things right pay off in the end, or will Sam keep pushing him away until there’s nothing left to fight for? How can two people learn to rely on each other when life keeps hurting them both? 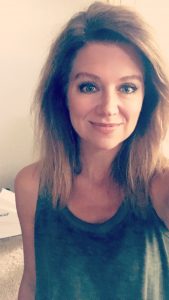 Author Amy Matayo is an excellent speaker, mathematician, seamstress, chef . . . and liar. She’s decent at writing books but not much else. Then again, the book thing makes her marginally cool and a whole lot intimidating.

Not really. Not even her kids are afraid of her.

She graduated with barely passing grades from John Brown University with a degree in Journalism. But she’s proud of that degree and all the ways she hasn’t put it to good use.

She laughs often, cries easily, feels deeply, and loves hard. She lives in Arkansas with her husband and four kids and is working on her next novel.

More about Walk it Out 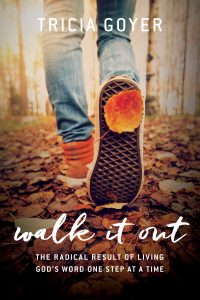 What Happens When We Read God’s Word and Actually Do What it Says?

Bestselling Author Tricia Goyer demonstrates the powerful work God accomplishes if we are willing to step out in obedience to Biblical commands and His quiet urgings, no matter our fears or feelings of inadequacy.

Walk It Out illustrates the real-life results of listening to the Scriptural mandates such as care for the orphan, serve the poor, go into the world to spread the gospel, and love others of all races. The author’s journey, from accepting Christ’s forgiveness and telling her story of redemption to answering the call to adopt seven children when she least expected, is filled with the exhilarating, radical, unexpected life that we experience when we walk into God’s plans for us.

“I neither planned or expected any of this—from the ten kids to the stamped-up passport. I didn’t accomplish these things by making a list and checking it off. They happened as I took steps of faith to follow God’s directives.” ~Tricia Goyer

Click here to pre-Order a copy of Walk it Out and receive the e-book 30 Days of Prayer as You Walk it Out FREE!