You are here: Home / family / What a Girl Wants, What a Boy Needs part 2 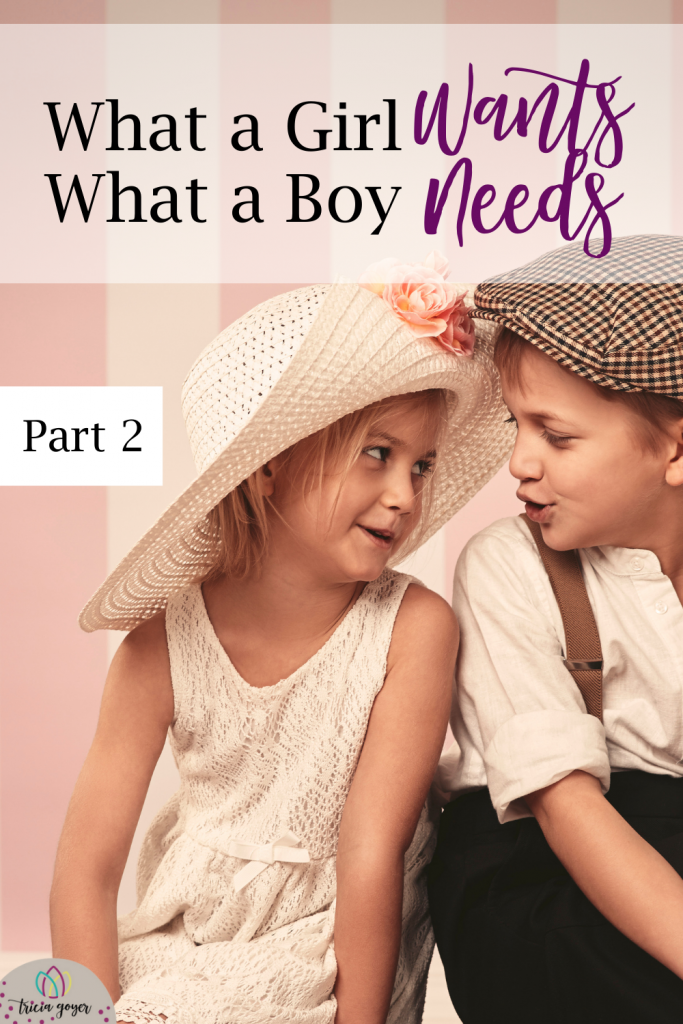 If you missed it, be sure to check out Part 1 from last week!

What a Girl Wants

A dad’s relationship with his daughter will shape her life. A girl looks to her father in order to understand her own value. Here are specific needs every dad can meet:

A Girl’s World. “Sometimes dads put the responsibility on the mom for raising their daughters. Instead, dads need to enter their daughters’ world,” says Dr. John Townsend.

Dads do this by connecting with his daughter where she’s at, whether it’s playing dolls, reading a book together, or going for a walk.

“When a dad reaches out, he helps his daughter see he’s not some strange, frightening figure who is so different from her,” adds Dr. Townsend. “The best thing a father can do is to make it safe for a little girl to relate to him—to be a warm and inviting person.”

Intimacy to girls means relating at a deep, emotional level. “I drive my young daughters to school,” says Dr. Smalley. “What they want during this time is a deep emotional connection. I listen to them and respond with questions like, ‘How did that make you feel?’”

Girls also need to hear from their fathers: “You can do anything.” Girls need to understand their worth.

“One day when I was cutting out magazine photos with my kindergartner for a school assignment, I noticed that all the photos were of skinny models with long blonde hair,” says Dr. Smalley. “It was a good time to discuss society’s twisted views. Even at that young age, I told her, “Honey, that’s not who you need to be. That’s not where your value is. Your value is in Christ. Your value is in your character.”

“For young girls, their opinion of themselves is dependent on what other people say,” adds Robin Gunn, who also authors, Gentle Passages, Guiding Your Daughter to Womanhood (Multnomah). “Daddies need to focus on inner qualities, praising a girl’s character, and extolling her wise decisions.” 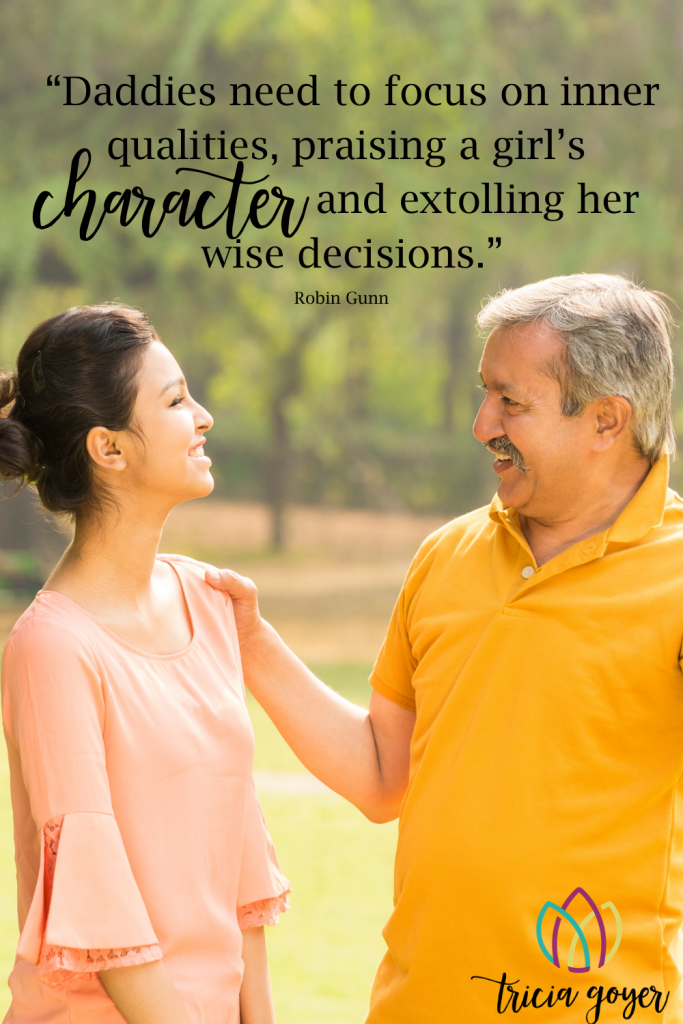 Modeling the Opposite Sex. From early on, a dad provides his daughter’s identification with the opposite sex. The character qualities she sees in her father are the same qualities she will look for in a spouse.

“It’s important that a father model how a male should treat a female,” says Dr. Townsend. “Make sure your daughter feels respected and safe.”

“How I treat my girls is going to be their expectation of what’s okay and what’s not,” adds Dr. Smalley. “I let my daughters know I’m not going to hit them, yell at them, or use swear words because they’re more valuable than that.” This is not just what a girl wants, but it is also what they need.

Independence. Since dads are more aggressive and goal-oriented, they are the perfect role models to teach their daughters about initiative and taking risks.

“A mom says, ‘Be safe.’ A father says, ‘I bet you can’t make it to the top.’ This male influence helps little girls not be afraid of life. It gives them a sense of their own freedom,” says Dr. Townsend.

“It’s important to teach little girls the tools that are not natural to them such as problem-solving,” adds Dr. Smalley. “Dads can do things for their daughters, such as getting their bike out of the garage, or better yet, they can work with their daughters to solve the problem.”

Touch. “From the time my daughter was small, I knew the importance of touch,” says Mike Yorkey, editor of The Christian Family Answer Book. “If my daughter didn’t get hugs from me, I knew she’d look elsewhere.”

“I love to see my husband giving my daughter hugs and strokes on her hair,” says Robin Gunn. “When girls are young, dads do these things naturally, but when a girl starts to mature the physical touch doesn’t come as naturally to the father. Of course, that’s when girls need this affection more than ever.”

The Blessing. “The ‘Number One’ thing we should remember in what a girl wants and the most important thing a daughter needs from her father is what the Bible calls ‘The Blessing.’ This is described in Genesis 27,” says Dr. John Trent, co-author of The Gift of the Blessing (Thomas Nelson). “The blessing represents a unique opportunity for a dad to communicate his unconditional love and acceptance to his daughter. This reflects God’s love for her as well.” 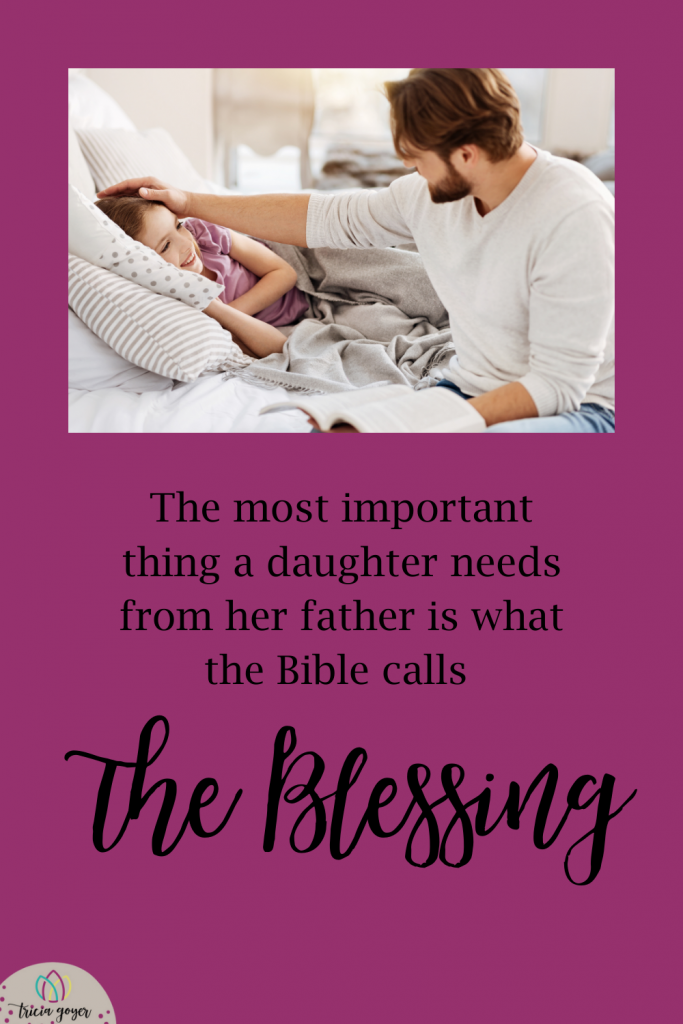 A family blessing begins with a meaningful touch. It continues with a spoken message of high value, a message that pictures a special future for the individual being blessed, and one that is based on an active commitment to see the blessing come to pass.

The gift of a blessing can be given during a special night when parents pray over their daughter—or their son. But parents must also remember that the blessings we provide occur in our children’s lives on a daily basis whenever we, as mothers and as fathers, reach out to meet the unique needs of our sons and daughters.

Do you have something to what a girl wants in her relationship with her father? Comment and share!