You are here: Home / family / When Conflict Happens in Marriage 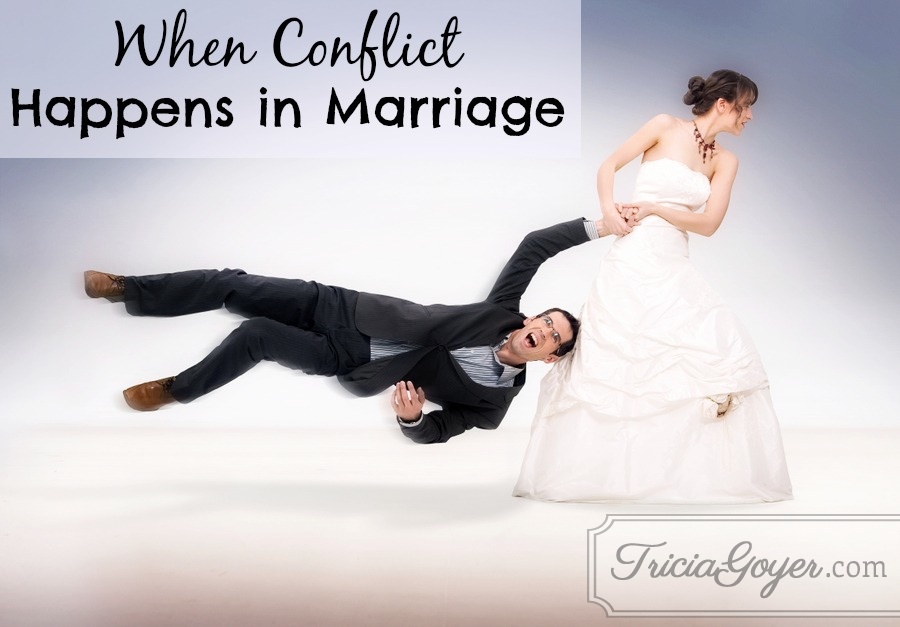 When Conflict Happens in Marriage

Every relationship has conflict—some more than others. Unlike the television sitcoms that Gen Xers grew up with, conflict in our daily lives doesn’t wrap up in thirty minutes, with everyone smiling at the end. When I think about all the conflicts John and I have had in the past, they are all based on one thing: selfish thinking on the part of one of us.

It’s an easy thing to succumb to. After all, from birth the world centered around us. It was only over time and reprimands we discovered we will not always get our way.

“Selfishness probably kills more marriages than anything else, including adultery (which is selfishness crawling along slimy depths). Selfishness speaks of my identity, my rights, my fulfillment, my happiness.”

It’s not that we mean to be selfish. It’s just so easy to do. We need to be other centered rather than self-centered!

“Most marriages run into trouble when husbands and wives make two mistakes: they stop doing things that strengthen the relationship, and they start doing things that hurt it,” says Dr. Greg Smalley, author of The Marriage You’ve Always Dreamed Of. Repeated disappointments, arguments, and frustrations lead to conflict, negativity, and dullness.”

What might be the cause of conflict in your #marriage? @TriciaGoyer

We know Dr. Smalley’s words are true, and if we take time to stop and think about it, we can point to specific actions, words, and attitudes toward our spouse and either give ourselves a thumbs up or a thumbs down. There is no middle ground, after all. We are either strengthening our relationship or hurting it. Amazingly, this is God’s plan for marriage and life.

In fact, here is what the Bible has to say in Romans 5:3-5 in the Amplified version:

Moreover [let us also be full of joy now!] let us exult and triumph in our troubles and rejoice in our sufferings, knowing that pressure and affliction and hardship produce patient and unswerving endurance. And endurance (fortitude) develops maturity of character (approved faith and tried integrity). And character [of this sort] produces [the habit of] joyful and confident hope of eternal salvation.

Such hope never disappoints or deludes or shames us, for God’s love has been poured out in our hearts through the Holy Spirit Who has been given to us.

The patient and unswerving endurance, the character, the hope that results from conflict isn’t something we always think about. It reminds me of those children’s books with the cut out windows. When you open the book and you look through the window you see a small part of the picture . . . and for the life of you can’t figure out what it could possibly be. Then, as you turn the page, the whole picture is revealed and you can see how the small part fits into the whole.

I have to remind myself that my perspective is through a very small window (which is hard when John and I are in the midst of a heated debate), but God sees the complete picture. And He sees how through conflict we actually learn resolution. We learn not to be demanding or selfish. We learn to consider others better than ourselves. We know how to react better next time . . . IF we choose to work through it. IF we choose not to withdraw.

Habitual withdrawal as a way to cope with conflict is a high predictor of divorce. Why? If spouses withdraw from a conflict, they don’t ever solve it. They might try to work out the problem separately or hit the Reset button and try to return the relationship to the status quo, but they never solve anything. And in time that often leads to divorce.

Withdrawal may not look like one of the most damaging relationship germs, but it is. When someone withdraws from conflict, he or she only delays the inevitable. It doesn’t help to leave the battlefield and go out for a long jog; in fact, this usually makes things worse. When we avoid conflict, we merely brush the hurt under the rug of our soul.

Eventually the mound of hurt gets so big that it starts spilling out the sides—and what seeps out often looks a lot like anger, bitterness, depression, drug and alcohol abuse, eating disorders, or worse.

I’ve seen couples who have given into resignation. In fact, I grew up in a home that was like that for many years. I never saw my parents have screaming fights. Yet I never really saw them laughing, talking, or having fun together either.

After a while it seemed like they didn’t care.

It’s taken time for me to realize that lack of conflict in a marriage should not be the goal. No one wants an emotionless marriage, but instead one in which the conflict is tended, just as the romance, the care, and the consideration is too.

Lack of conflict in a #marriage should not be the goal. @TriciaGoyer

When it comes to facing conflict in the marriage, the first thing we need to do is figure out the origin of it. Some of the conflict we face is internal. We have an inner sense that something is wrong. Many times this comes from unrealistic expectations. In our minds we fantasize something that is perfect, like Norman Rockwell’s Thanksgiving, and life is not perfect.

Other times conflict comes from something external . . . including, but not limited to, our spouse. Little things, such as over-committing ourselves and burning the candle at both ends, make it easier to get upset over things that most likely wouldn’t bother us on days we’re at peace and well rested.

“The most common mistake couples make is allowing negative emotions to dictate their behavior,” says Gary Chapman, author of The Four Seasons of Marriage. “By failing to recognize the power of a positive attitude, they fail to achieve their marriage’s highest potential.”

One day, my husband John had to work late. I was a little upset but not half as creative as John’s co-worker’s wife. She sent this note in with her husband, “Please excuse my husband by 8:00 p.m. Total compliance is necessary due to his wife-threatening condition.”

It made me think how many times I turned little disagreements, misunderstandings, or unfilled expectations into a wife-threatening condition. Too many to count!

Of course, there are times when conflict involves more than a bad attitude. There is tough stuff that happens within marriage, including addictions and infidelity. And while I would never encourage a spouse to stay in a relationship where there is abuse, in most cases we turn our backs on our vows for far less.

“There are a lot of marriages today that break up just at the point where they could mature and deepen,” says author Madeleine L’Engle. “We are taught to quit when it hurts. But often, it is the times of pain that produce the most growth in a relationship.”

There are many things we fight about in marriage. There are bigger issues that we find hard to forgive, but one thing I try to remember is that John and I are on the same team. Winning an argument, or getting my way, should not be the goal. It doesn’t work that way. If we win, we win together. And if we lose, we both suffer.

I may win the argument, but I hurt my spouse’s heart. I might get my way for the moment, but in exchange my husband throws up his hands . . . and the first seed (or maybe not the first) of indifference sets in.

Steps You can Take

Thank you for my spouse, and thank you for working in our relationship. I pray that no matter what conflicts arise in our marriage that you’ll help us work through them and help us realize we’re on the same team, working toward the same goal: to glorify you.