You are here: Home / being an author / Writer Wednesday with Michéle Phoenix

Enter below for a chance to win a copy of Michele Phoenix’s Space Between Words!

The Making of a Space

There’s something exhilarating about writing a book. It’s a mystifying and fascinating process, a creative élan that galvanizes the writer and makes of the task more enjoyment than effort.

Except in the case of The Space Between Words.

Though my previous novels had been conceived more spontaneously, this one is the first I’ve written under contract. You see, when Thomas Nelson purchased Of Stillness and Storm in 2016, I was asked to write an additional book too. A book for which I sensed not an inkling of theme or location or character. A book I committed to in January 2016 and would have to submit just eight months later. So the thrill of pouring out a first draft, free from looming deadlines and signed agreements, was replaced in this instance by a more intentional effort.

By February, I was beginning to get antsy. Still nothing on that blank document staring at me from my laptop’s screen. Still nothing stirring in the recesses of my subconscious. Nothing but the crescendoing static of responsibility and deadlines.

In April, between ministry trips, I holed up in my aunt’s apartment on the outskirts of Paris and hoped a week of uninterrupted solitude would offer enough respite to foster creativity. The town was home to me, as I’d spent fourteen years of my life growing up there, and I trusted that nostalgia would fuel my imagination. I wrote feverishly for the better part of five days, but when I reached page 136 of the emerging manuscript, realized that the fraught story about heart transplants and cell memory was nothing worth publishing. Nothing new or truly interesting. Just sterile words on a computer screen.

So I quit. And I clicked delete.

And for reasons I still don’t understand, I wrote to Kathleen Rodgers, an accomplished novelist I follow on Facebook. I’ve never met her. We’ve never interacted even in writing before that day. Yet without questioning the impulse, I introduced myself in a message and told her about my dilemma, then asked her what she did to “write under the gun.”

I received a lengthy response within just a few hours. It was compassionate and supportive—and just what I needed to hear. Kathleen wrote, “Last Saturday, I wanted to hang up a forty-year career and walk away. But I kept telling myself to trust the process and just keep at it. Just work. Just write. I look for the magic when I feel stuck, unable to focus. If I’m not laughing, crying, getting goose bumps, feeling anger, shame, grief, joy, curiosity, pain, hunger, thirst, fear…then my readers probably won’t either. You know all this, but it’s so hard when we have that deadline hanging over our heads.”

With kindness and grace, Kathleen had led me back to the magic of passive inspiration and given me the courage to pause with expectation. It was time for me to stop striving.

For the remainder of my time in France, I used butter-dripping pastries to soothe my literary lostness and distracted myself from a nagging sense of failure with random YouTube viewing. On my last day there, I stumbled across a clip of Craig Ferguson, the former late-night host, speaking about his new show on the History Channel.

“History is psychotherapy for the entire human race,” he said.

That got my attention. I pondered the concept for a while. Could it be that the only way to make sense of the present is to investigate the past—to find connective tissue between different times and circumstances in order to learn from those who came before us?

Since I was just a stone’s throw from Paris, a city devastated by the terrorist attacks on the Stade de France and the Bataclan concert hall, those recent events seemed an apt place to start. The country was still reeling from the shock, the national trauma a nearly palpable force.

I pondered how France’s history might inform an understanding of present-day horrors and quickly remembered the stories I’d learned, growing up in French protestant circles, about the Revocation of the Edict of Nantes that had led to Huguenot extermination, the St Bartholomew Massacre, the Tour of Constance and the enduring faith of its tortured prisoners.

I wondered if a survivor of the Bataclan attack could somehow find solace and healing through connection with someone who’d lived through comparable horrors centuries before.

Though I was excited about the juxtaposition of modern terrorism and historical persecution, I needed an element that would connect the present and the past. But when my most determined efforts yielded nothing, convicted by Kathleen’s words, I committed to let myself rest in the discomfort of uncertainty.

I took off for England soon afterward to visit my friend, Renée. This kindred spirit sat with me at her dining room table as I told her about my literary challenge, then countered discouragement with hope. She somehow knew that if we just did some Googling, something would emerge. “Wouldn’t it be fun if a story that started in France ended in up taking a detour through England?” I mused.

I’m not sure what combination of Huguenot-related terms I used for my last Google search that evening, but when the name of a small church in Sandhurst, Kent appeared on my screen, along with an article describing an historic piece of Protestant history hanging on its sanctuary’s wall, I knew I’d found the link between the past and the present—and between France and England.

My mom arrived a couple days later for a previously planned vacation in the Land of Cream Teas and wasn’t in the least perturbed when she learned that our established itinerary was about to be sabotaged by the hint of a new story.

The pastor of Sandhurst Baptist Church welcomed us warmly, then introduced us to the ancient French item hanging under an arched window. (A few minutes into our encounter, we were astounded to discover that we’d already met twenty-six years before—a story too lengthy to summarize here.) Shaking our heads at the serendipity of it all, we left the small town certain that what we’d uncovered would become a driving force in The Space Between Words.

Our next stop was Canterbury, where a friend’s clerical collar and persuasive skills granted us access to the cathedral’s Black Prince Chantry, a sacred place for The Strangers who fled from France to England under threat of extermination. Nelly Durand and Captain Corb exist in this novel because of that rare privilege.

Four days later, after more research into vestiges of Huguenot history in southern England, my mom and I stared at the “No Trespassing” signs placarding a gate in the enchanting village of Holford. My favorite travel companion and adventurer didn’t hesitate for a moment. I watched as the seventy-seven-year-old former-missionary climbed over the rain-slicked fence with surprising agility and disappeared down an overgrown path. We spent a long time in the peaceful glen that afternoon, exploring the remnants of an old silk mill believed to have belonged to Huguenot refugees—wondering what we’d learn if the crumbling walls could speak.

The Space Between Words unfolded naturally after that, surprising and sobering me with unsuspected turns. I wrote on airplanes and in cafés, in stolen moments and midnight hours, and submitted the manuscript one day ahead of time despite its taxing genesis.

More about The Space Between Words 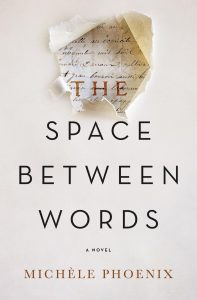 “There were seconds, when I woke, when the world felt unshrouded. Then memory returned.”

When Jessica regains consciousness in a French hospital on the day after the Paris attacks, all she can think of is fleeing the site of the horror she survived. But Patrick, the steadfast friend who hasn’t left her side, urges her to reconsider her decision. Worn down by his insistence, she reluctantly agrees to follow through with the trip they’d planned before the tragedy.

“The pages found you,” Patrick whispered.

“Now you need to figure out what they’re trying to say.”

During a stop at a country flea market, Jessica finds a faded document concealed in an antique. As new friends help her to translate the archaic French, they uncover the story of Adeline Baillard, a young woman who lived centuries before—her faith condemned, her life endangered, her community decimated by the Huguenot persecution.

“I write for our descendants, for those who will not understand the cost of our survival.”

Determined to learn the Baillard family’s fate, Jessica retraces their flight from France to England, spurred on by a need she doesn’t understand.

Could this stranger who lived three hundred years before hold the key to Jessica’s survival?

Born in France to a Canadian father and an American mother, Michèle Phoenix is a consultant, writer and speaker with a heart for Third Culture Kids. She taught for 20 years at Black Forest Academy (Germany) before launching her own advocacy venture under Global Outreach Mission. Michèle travels globally to consult and teach on topics related to this unique people group. She loves good conversations, mischievous students, Marvel movies and paths to healing.