You are here: Home / being an author / Writer Wednesday with Nathan Goyer

Congratulations to Paula Shrekhise for winning a copy of Ascension of Larks. Please e-mail your mailing address + whether you choose paperback or audiobook to my assistant Christen (amy@triciagoyer.com).

Scroll below for a chance to win a copy of Nathan Goyer’s Bask! 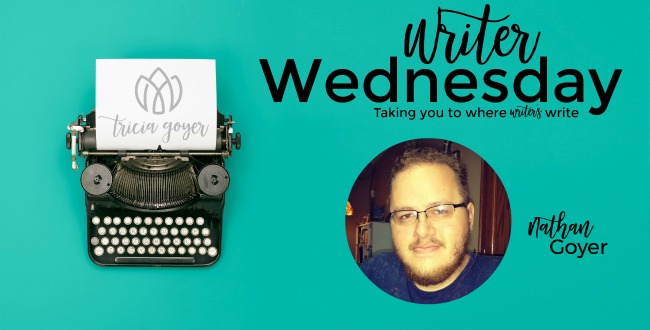 Today I have a very special writer on my blog—my son Nathan! Nathan my third oldest child, and I homeschooled him all the way through. Nathan has always been a quiet, creative kid. He was the kid who’d sit for hours with his dinosaur toys and play with them, making up a story in his mind. When he got older he’d do the same with Beanie Babies … and he’d lead his friends, telling them epic stories of the adventures their toys were going on.

I knew Nathan was a great writer, but I was still nervous when he went to college. We did a lot of creative writing, but not a lot of academic writing. I wasn’t sure we even wrote one 5-paragraph essay during high school. (I almost had a panic attack on the day he started college realizing that!) But within a few weeks of started college Nathan was asked to mentor in the writing lab in the library. He was a Freshman, and he was soon mentoring graduate students. WHOA!!

A few years ago Nathan started writing a novel, Bask. He worked diligently, and we even hired an editor to go through his novel. The editor was impressed that someone so young could come up with such a complex story. I was too! Here is more information about Nathan, Bask, and the books he still plans to write.

There is more information about how YOU can order Bask at the end of his interview!

When did you get started writing?

About nine years old! The first book I ever wrote was a story about ????? from Sonic the Hedgehog. I put ????? because each of the five chapters added a letter to the protagonist’s name. By the end, it spelled out Tails. I wouldn’t recommend this method to new authors, the neighbor I gave it to seemed pretty confused about what was happening!

How did you get the story idea for Bask?

About three years ago I was thinking about potential ideas for a book. I had just trashed a more classic style of fantasy book idea and was leaning closer to a science fiction. Then one day I was driving and on the license plate in front of me was the word “Bask”. It made me think about what you could bask in aside from the sun. I came up with the whole idea for the story right then and there! I never saw the car again, but I’m glad I saw it when I did!

Is Bask a part of a series?

It sure is! The story of Bask will take place over four books. Three following the main characters in Eric and Aeia, and then a prequel about the former Guard-Captain Eugho.

What have you learned about the writing process?

That it takes a lot of work. I never dreamed how many times I would go through the drafts! Also, the first draft was not even close to what the final product became. Before Bask, I assumed that I would write a whole book, edit some stuff, then ship it. Not true at all!

How have your parents impacted your journey to become an author?

Hmm. Nope. Don’t think having a famous author for a mother impacted my journey. Not one bit. I kid, my parents have always been supportive of my stories! Whether it was the elaborate storylines I created for my toys, or the many quarter-to-half books I showed to them, they always listened with interest and even helped brainstorm ideas with me sometimes! I feel very lucky to have been raised by them.

What part does your faith play in your books?

So much so that whenever I come up with a story I wonder what the point is if it doesn’t talk about God in some way. The entire concept of Bask is wound up in the question “what would be the impact of one man being used by God in a world where God is unknown?”. My faith and beliefs are integral to the stories I write, I don’t believe they would be worthwhile without them.

Growing up on books like Narnia, The Door Within, The Kingdom Series, and many others shaped how I view fiction. I greatly respect all those authors out there who dedicate so much of their lives to brining the Christian message and God’s love to life in so many interesting ways. It was my desire to be like them that lead me to where I am now!

Who’s @TriciaGoyer’s special guest on #WriterWednesday? Check it out here and enter to win a copy of #BasktheBook 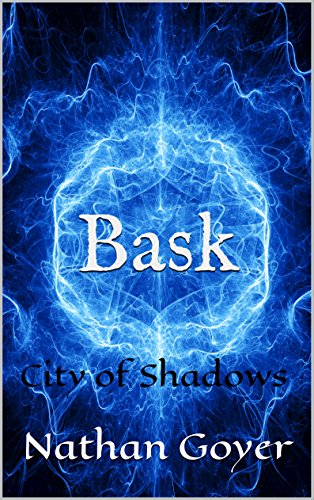 What would be the impact of one man being used by God in a world where God is unknown?

In an attempt to escape a potentially world-ending catastrophe Eric Dunst steps through the world’s first teleporter, his destination Sydney. Instead, he finds himself on a new world entirely. A dark world, corrupted and in constant conflict. A world that revolves around a single energy source that every living thing is enslaved to. Every living thing except Eric. Thrown in the midst of a rebellion, and wondering if there is anything left of his home, Eric prepares himself for a journey that will change everything he understands.

Nathan Goyer is a new Christian author who is bringing the word of God to life in new ways. Fictional world building and fantastical settings are his way of tackling real issues and thoughts, as is seen his first book series Bask. The Bask trilogy is about an alien world that has become dependent on a mysterious form of energy, and those in power have abused the population’s need for the precious resource and use it as a means of control.

Raised by famous author Tricia Goyer, Nathan has spent his life creating stories and practicing his writing. He took creative writing classes through high school, and was even recruited to be an intern at the writing center in University of Arkansas Little Rock.