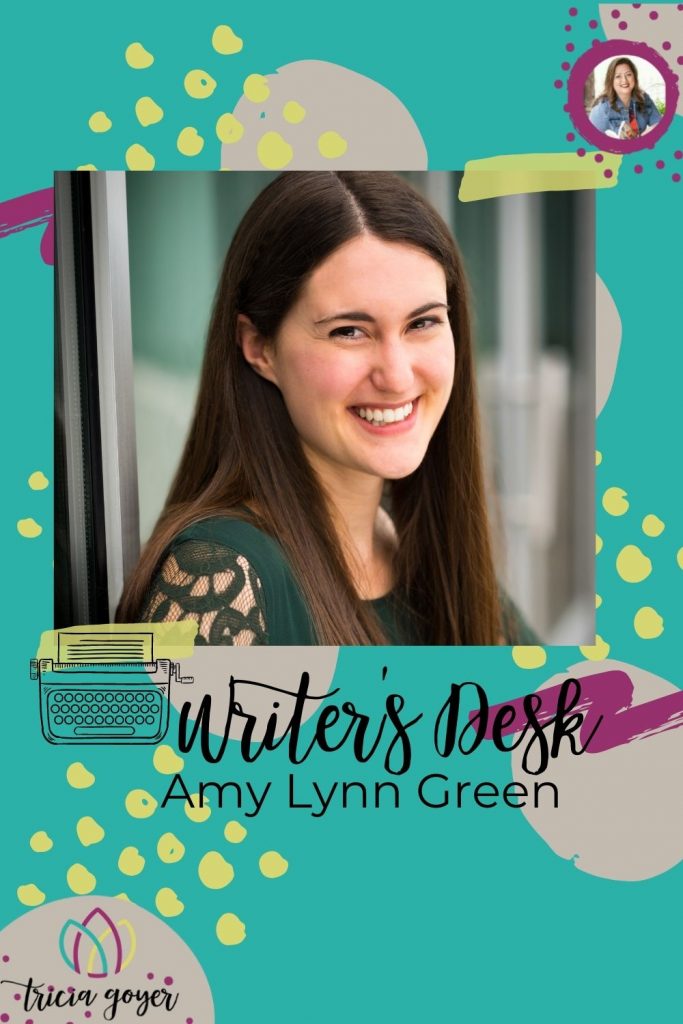 We’re so excited to have Amy Lynn Green featured on this week’s writer’s desk. Amy Lynn Green is a lifelong lover of books, history, and library cards. She worked in publishing for six years before writing her first historical fiction novel, based on the WWII homefront of Minnesota, the state where she lives, works, and survives long winters. She has taught classes on marketing at writer’s conferences and regularly encourages established and aspiring authors in their publication journeys. If she had lived in the 1940s, you would have found her writing long letters to friends and family, listening to jazz music, daydreaming about creating an original radio drama, and drinking copious amounts of non-rationed tea. (Actually, these things are fairly accurate for her modern life as well.) Be sure to stick around until the end of the post for more about her most recent release plus a chance to win a copy!

My “routine” basically involves plunking down on a couch (I prefer that to a desk) and getting as many words in as I can in the time I have. I’m learning to use the little chunks of time rather than waiting for the perfect four-hour completely free window of opportunity with nothing else on my mind except unbridled creativity. Because, sure, those times happen occasionally, but not enough to get a whole book written.

I’m a…morning person. (Waits for people to throw tomatoes.) Really, though, I can write reasonably well at most times, except that after 10 PM, my mind typically turns to mush and anything I put on the page will need to be cut out later.

Harney and Sons Hot Cinnamon Spice Tea! I’m not much of a snacker while writing but will reward myself afterward with chocolate or pull-and-peel cherry Twizzlers (really sophisticated, I know). 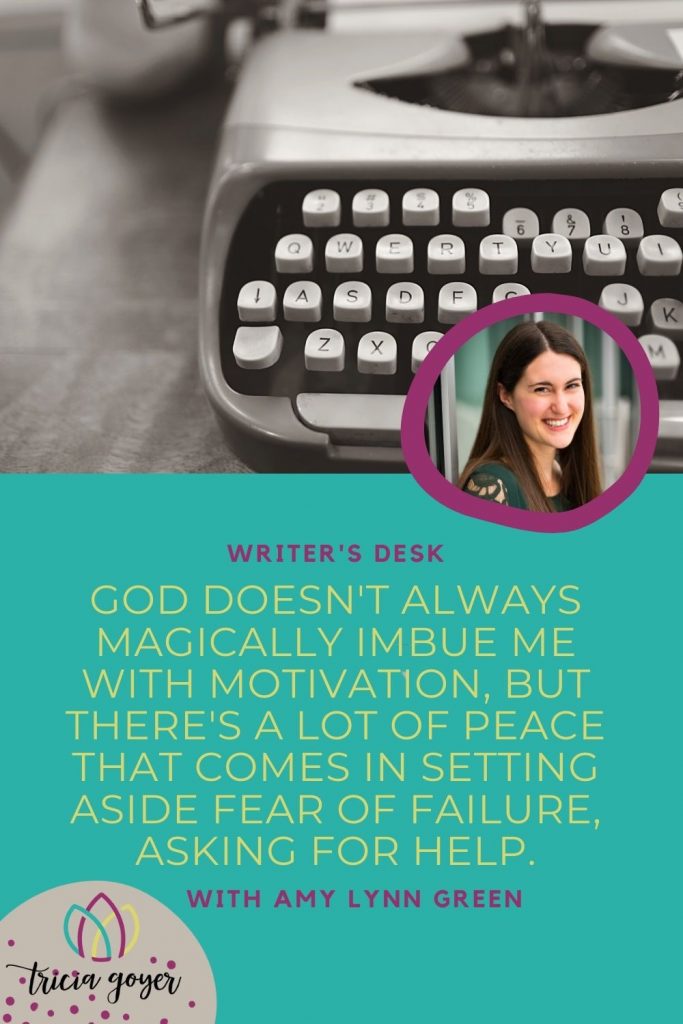 A writer friend asked me about this recently, while struggling with feeling unexcited about her story. Here’s what I told her: When I feel creatively dry or uninterested in a story I was once excited about, first I try writing a scene from later in the story, rather than where I “left off.” Maybe one that’s easier, or more exciting, or that contains an emotion I’m feeling at the moment. If that doesn’t work, I talk about my story with someone, which often generates excitement and even new ideas since I’m a verbal processer. Prayer is also a huge part of this whole process. God doesn’t always magically imbue me with motivation, but there’s a lot of peace that comes in setting aside fear of failure, asking for help, and then saying, “You know, whatever happens with this story, I want to be faithful.”

I love that every writer has a totally different writing process. Mine is not one I could ever teach a class on. It’s minimally-managed chaos. I’m like a pajama pantser–you didn’t think outlining could get any more casual, but HERE I AM. For example, I write scenes out of order, sometimes just in dialogue first, adding the descriptions later. Sometimes I leave scolding notes for myself in the margin about what’s wrong so I can fix it later instead of obsessing over it in the moment. And maybe 1-2 minor characters survive the first draft without their names being changed. Occasionally I think I know the ending, but by the time I get there, I am never right. Never. Let’s just say that I do a lot of editing after that messy first draft is done.

Read in your favorite genre and in a wide variety of other genres and styles. Write without tying your hopes and dreams to what happens to that particular manuscript, knowing the process itself is the best teaching tool out there. Enjoy the learning and growing in your craft and always look for new opportunities to do so (even in areas like marketing or the publishing industry). Encourage other writers—living from a mindset of abundance instead of scarcity will make you a better writer and a better person.

Quickfire questions — what are you currently:

Binge-watching: The Great British Baking Show (the accents! the cakes! the impossibly adorable and talented contestants doing what they’re passionate about!)

Fiction: The White Rose Resists by Amanda Barratt and Oathbringer by Brandon Sanderson

Nonfiction: Gentle and Lowly by Dane Ortlund (soooo good!) and A Woman of No Importance by Sonia Purnell

Current Starbucks pick: I don’t actually like coffee (gasp! I know), so hot cider or hot chocolate are my go-to.

Be sure to catch the video interview with Amy Lynn Green HERE, and be sure to join Avid Readers of Christian Fiction group so you don’t miss any of our other fun author LIVE chats coming up!

More about Things We Didn’t Say: 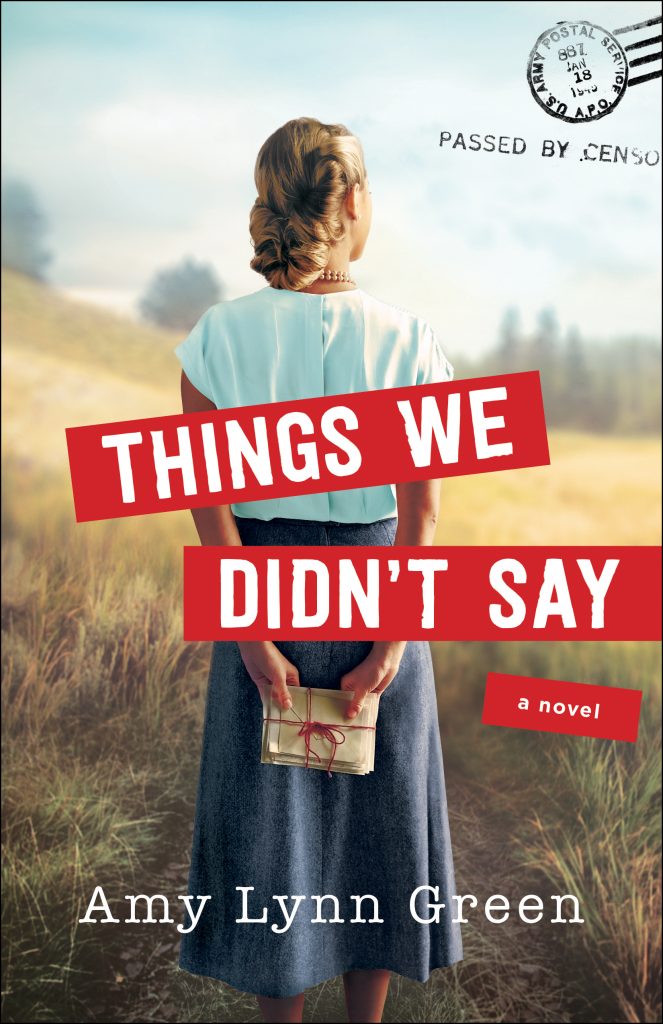 Headstrong Johanna Berglund, a linguistics student at the University of Minnesota, has very definite plans for her future . . . plans that do not include returning to her hometown and the secrets and heartaches she left behind there. But the US Army wants her to work as a translator at a nearby camp for German POWs.

Johanna arrives to find the once-sleepy town exploding with hostility. Most patriotic citizens want nothing to do with German soldiers laboring in their fields, and they’re not afraid to criticize those who work at the camp as well. When Johanna describes the trouble to her friend Peter Ito, a language instructor at a school for military intelligence officers, he encourages her to give the town that rejected her a second chance.

As Johanna interacts with the men of the camp and censors their letters home, she begins to see the prisoners in a more sympathetic light. But advocating for better treatment makes her enemies in the community, especially when charismatic German spokesman Stefan Werner begins to show interest in Johanna and her work. The longer Johanna wages her home-front battle, the more the lines between compassion and treason become blurred—and it’s no longer clear whom she can trust.