I am so excited about Cathy McCrumb‘s amazing debut, Recorder (which was just released earlier this month). Which — get this — she thumb typed the entire thing on a Kindle! Cathy is amazing and I just love the start of her Children of the Consortium series. I know you will too!

Make sure you stick around to the end to see how you can enter to win a signed limited edition hardcover of Recorder! 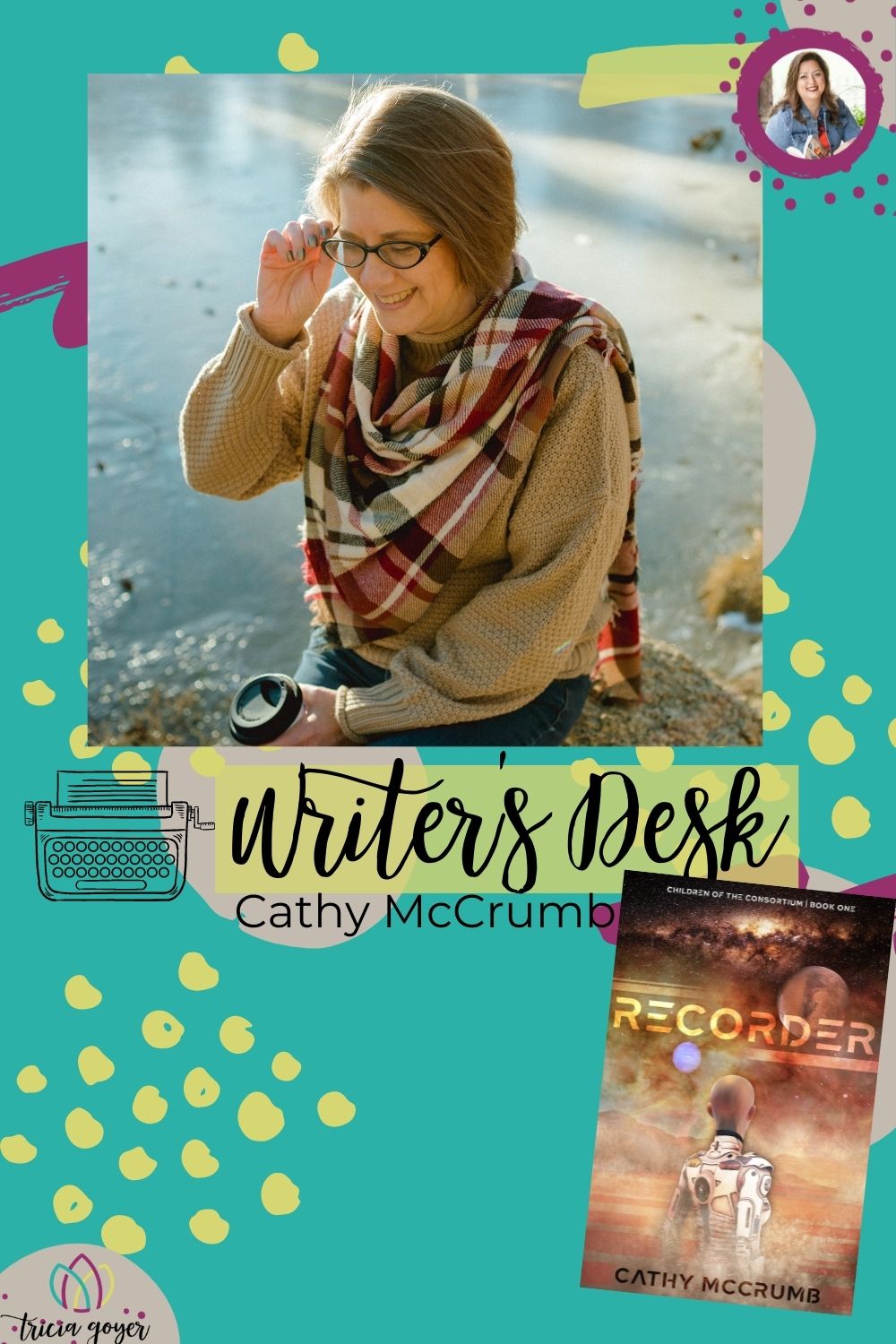 Cathy McCrumb graduated from Biola University with a degree in literature and a love for stories. She and her husband, whom she met while writing letters to soldiers, have five children and currently live within the shadow of the Rocky Mountains. While writing is one of her favorite things, she also enjoys reading, long hikes, long naps, gluten-free brownies, raspberries, and crocheting while watching science fiction movies with friends and family.

Most of her imaginary friends are nice people.

I think that the answer lies somewhere between “not really” and “that depends.”

When I wrote Recorder, I didn’t even have a computer, so I thumb typed it on my Kindle in my spare time—waiting in the van, standing at the kitchen counter while pasta water boiled, or sitting on the bedroom floor after I read to the boys at night. I’d email it to myself for backup. I’ve had a computer for about four years now, but Recorder’s sequel is the first novel I’ve written on a “real” keyboard.

My second novel is a different sort of beast, and I’m adjusting to writing differently. That being said, I usually write at night. I have something to drink, put on headphones and one of my playlists, and type. Sometimes it’s at the kitchen table. Others I sit at my desk, outside, on the sofa. In other words, wherever I can find a moment or two.

In the dark! No, really.

I’m most productive when it’s quiet, especially if I’m rested. While I can write during the day, I homeschool my kids, so if I want to write in the morning, I have to wake up before everyone else.

Unfortunately, the sound of Mom being awake is frequently enough to summon my kids from the depths of sleep. I do usually get a second wind late at night, so lately most of my writing is done after 10 pm.

Snacking is dangerous because I don’t notice I’ve eaten everything until it’s all gone. There have been times that I forget to eat while writing for a similar, overfocused reason.

I love coffee and tea. Mornings are not the same without coffee, which I like best with half and half, no sugar. In the evening, I usually avoid caffeine, so then it’s all about ginger-turmeric, mint, Egyptian licorice, or wild orange tea.

Sometimes it’s a result of needing to process things on a personal level. When my father died, I couldn’t write for a long time, and then when I did write, I wrote and rewrote the same 3000-word fantasy story over and over. I don’t know that I will ever share it, beyond with a few close friends. The only thing is to fall back into God’s arms and focus on who He is.

But that isn’t the same thing, I think, as being stuck in a scene. Most of the time my writer’s block has been because I’m making an intuitive error in the story. Once I backtrack and identify it, things flow a little better. I find that if I let the characters be the block disappears. While writing the sequel, I was absolutely stumped for a while, both out of fear of a deadline (and not writing was certainly not helping that) and because I knew what I wanted to happen at the end. Once I eliminated my favorite chapter at the end of the book, things smoothed out. I couldn’t write toward that scene, so I couldn’t write at all.

This always feels like a trick question to me. I think that writers are all plotters AND pantsers. It’s just when you implement order.

I’m a discovery writer. I don’t understand how people can write to outlines. Last year I tried my hand at a solid outline. After all, I had to finish a story for an anthology, and I had a timeline. Five months and four discarded outlines later—lovely in their characters, themes, and plots—I gave up and let the characters take over. It was the hardest story I had ever written to that point. I didn’t learn, though, and fought Recorder’s sequel for six months, trying to force it to behave. Finally, I let go, and it has been easier ever since.

Now, I do know roughly where I’m going, and I find that if I write notes on the day in the morning, in the evening, after mulling it over, I can write much more quickly.

Moral of the story: Everyone is different, and there is not a “right” way to write. Go with the strengths God gave you.

A writer will improve with practice, just like a pianist gets better with practice. Then go to the library. Borrow (and read) books on crafting, read blogs, find a solid crit group who understand true constructive criticism, write more.

Another important thing is to be kind to yourself as you learn because writing is an incredible balancing act. Character, setting, plot, theme. Action, reaction, recovery. Positive, negative, and flat arcs. There is so much to balance and learn that you need to be patient.

Writing is a long game.

Quickfire questions:
What is your favorite thing to binge-watch: The Mandolorian or Pride and Prejudice (The A&E/BBC version, of course!) or the tenth and eleventh Doctor
What are you currently reading: Gentle and Lowly; The Cricket in Times Square (reading this aloud to my youngest!); finishing Morgan L. Busse’s Mark of the Raven, and planning on reading Robin W. Pearson’s ’Til I Want No More next.
What is your favorite song: varies depending on my mood, to be honest. Something on my Shadows playlist?
What is your favorite specialty coffee/tea drink: breve latte—creamy coffee goodness!

Enter to win a signed limited-edition hardcover of Recorder.*

Click here to watch the interview with Cathy McCrumb 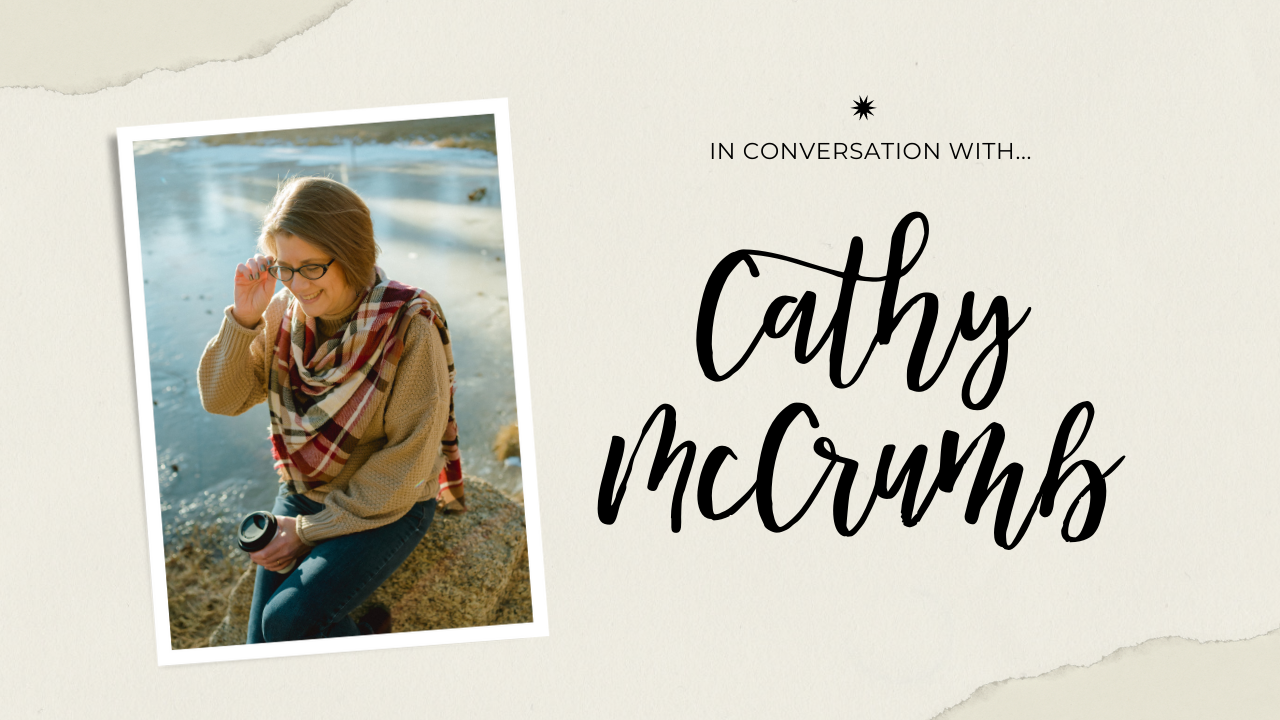 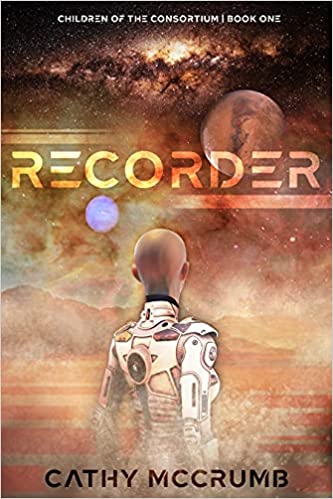 The Consortium is All. But Recorder Can No Longer Obey.

Recorder has no family, no friends, and no name. Donated to the Consortium before birth, her sole purpose is to maintain and verify the records. A neural implant and drone ensure compliance, punishing for displays of bias.

Suddenly cut off from controlling technology, Recorder tastes what it means to be human. But if the Consortium discovers her feelings, everyone she knows will be in danger.

With no name, no resources, and only an infinitesimal possibility of escape, Recorder’s time is running out. 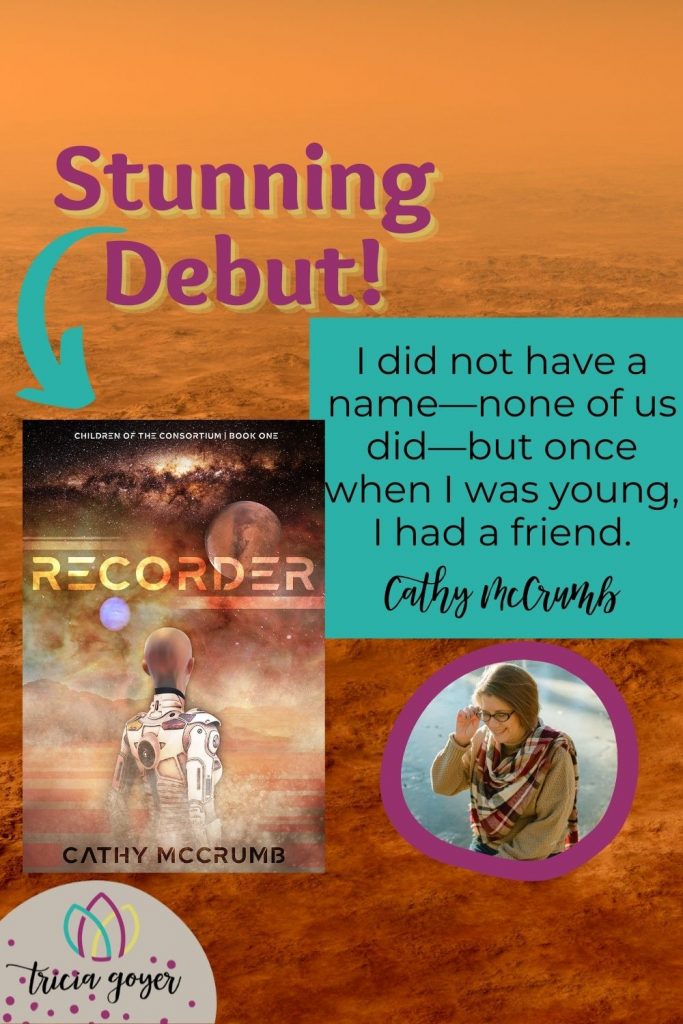 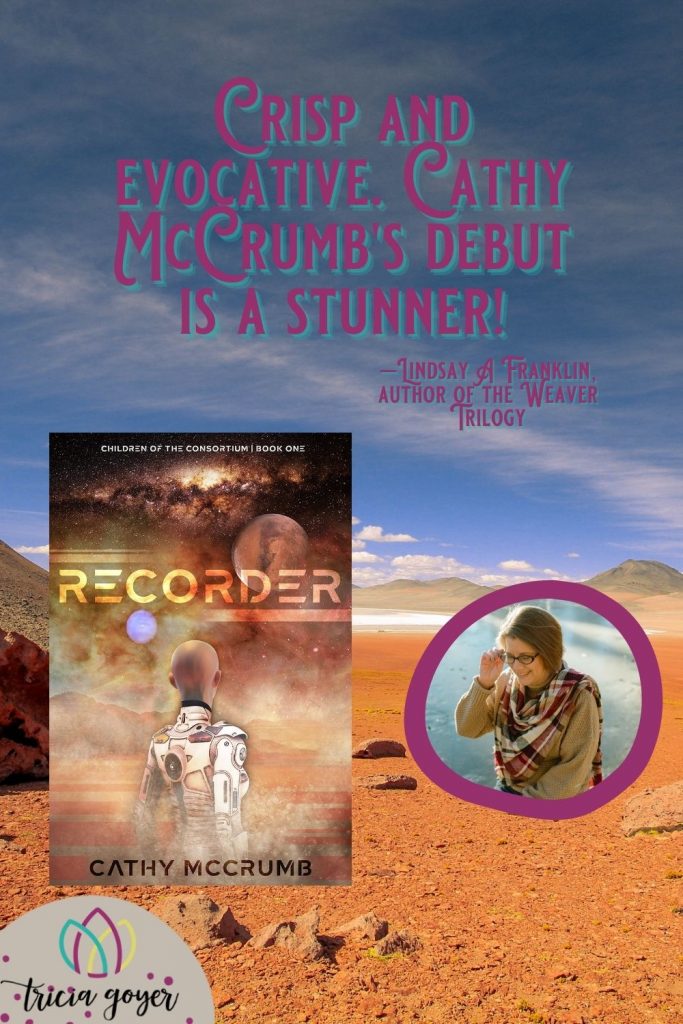 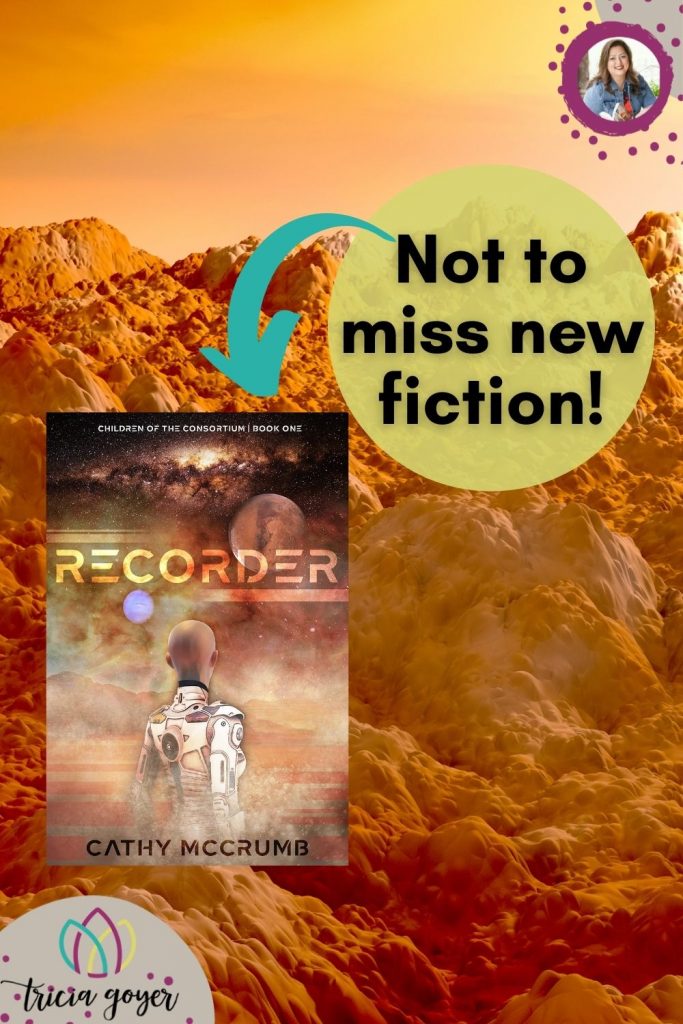